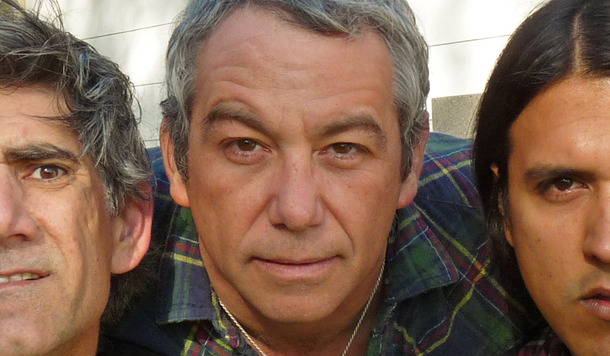 It seems as if Mike Watt has his priorities in check.

A prolific songwriter and genre-defining bassist, Watt would cringe at both compliments. He’s remained quite humble and somewhat zen about the lineage he began over 30 years ago playing alongside D. Boon and George Hurley in the Minutemen, and our conversation unfurled much more like a lazy river than a prodding interview. As we talked about a lot of things – from AC currents to the Brooklyn Zoo to Marxist interpretations of The Wizard of Oz – we were unable to resist falling in and out of premeditated topics the way driftwood might graze and fall along the port of Los Angeles, sifting stateless up the coastline without a name or an end.

What do you think of social media-based artists, the “one-single per week” type of club? Where do you see the age of information taking art?

I think the burden of being creative will always be there. Things should never get solved. The delivery means have changed but like, in my case, I can collaborate with people a lot easier. We can trade files; I don’t have to be in the same room with them for like 11 days. So, opportunity is there. I never think there can be too many bands and stuff like that; I’m not one of those people.

You don’t think that it’s too easy to make music these days?

No, I like it being easy. The hard part is being creative. Like, you don’t have to come up with another language to write a good book. You can still do it in English and not invent one new word and still make a very interesting novel. It’s hard though.

That’s really nice to hear actually, because I feel like I’ve been talking to a lot of musicians lately who are pretty down on the current state of things.

The only bad thing about the new days is that “genre” idea.

Kind of lazy marketing or something. Cause music is a big universe, right? It’s all kinds of stuff. So, to reduce it to genre is a little silly. But all the other things… no. They’re not lame. I’m not that way. It’s still hard to be creative but I think that’s always going to be the case. But as far as means, I would love them to be as simple as possible and open to everyone.

I guess part of my cynicism about the current state of music stems from seeing a lot of opportunists.

Well, I can’t believe that that did not happen in the old days. I think Pat Boone sold quite a few more “Tootie Fruitys” than Little Richard; and that’s a pretty terrible version. Humans co-opting good ideas has always happened.

Well, yeah. I’m from the punk movement. Just get it out there! It’s like skateboarding; you fall down, you get right back up. Could there be too many skateboarders? Should only really expensive skateboards be allowed out? No. That’s the way I look at it. And there might be some ingenuity [to come out of that]; somebody might come up with some new tricks, of course.

And personally for that guy on the board, it probably means a hell of a lot. I don’t want to get all “know it all,” and say everything’s been done and all that shit. It’s easy to do that. Humans can get kind of cynical, especially if you’ve been around a little while and you think you’ve seen it all. But really everybody’s got something to teach you.

Do you feel like a lot of your contemporaries are more cynical than you are?

I hope not. You were just telling me everyone is down.

Yeah, it’s just a lot of the people I’ve talked to recently seem very down on the current state of music and art in general. That’s not the vibe you are getting from people you talk to?

Yeah, I’ve heard that too. But, you know, any good farmer will tell you that if you want a good crop, use a lot of manure. There’s too much hubris. Not to put anyone down, but you’ve got to air on the side of a little humility. To know if its bad, to know if you don’t like it – you have to hear it first, you know? Can’t automatically say everything is bad that’s coming out today.

I wish I would hear that more often. Ok, so let’s talk a little bit about Hyphenated-Man cause that is why we are talking after-all. Are their any big influences you are particularly drawing from for this release? I got a really big Joyce vibe with the inventive language, the folk-tale landscape.

Oh yeah, he’s a big influence on me. But there’s this guy, L. Frank Baum – the guy who wrote The Wizard of Oz; I’ve been thinking about Dorothy. [Hyphenated-Man] is kind of my take on [The Wizard of Oz]; a coming of age Dorothy tripping on what guys have to do to be guys. That seems to be the big dilemma of the quote unquote midlife crisis. You ever notice the scarecrow and the others crowded around Judy Garland at the end [of the movie]: you were there, and you were there and you were there. Those were farmhands! Even the man behind the curtain, the wizard, you know where I come from, if you’re brave you get a metal, if you’re smart you get a diploma. He’s actually saying no to society validating bullshit and saying, you have to make up your own mind; that’s what makes a man. And Dorothy’s tripping, yeah, what are guys? They do all these things that society has prescribed as being the right thing, the right way to be, when really it is all too personal of a journey, you have got to figure it out for yourself in a way that you are supposed to. The other two operas were talking about something that had happened. And so on this one, I wanted [to make it] more in the moment. We don’t know what the future is, and I didn’t want to get too sentimental about the past, I wanted to deal right with the now.

And with the hyphenated names, it comes across as a fractured person.

Yeah, like with the Basha drawings: if you stop somebody for a moment and look at them, they are composites. But because of the roles they play during the day, during the week, during the month – there are many different kinds of composites, especially for the sake of my album.

You recorded the album in Brooklyn, right?

Yeah, well that’s where Tony Maimone was and he’s an old bass hero of mine. He was in Pere Ubu. D. Boon and me saw them on their Modern Dance tour and we just loved that band man, so much. So I just indulged myself, I wanted to make an album with one of my favorite bass players.

He had a studio in Brooklyn, so in the middle of a tour I took three days off and did it.

This being a Brooklyn-based media outlet and all, do you remember specifically where the studio was?

Oh yeah, it was on Union and Metropolitan.

Yeah, what’s that called? Williamsburg? It’s called Studio G and it’s very noisy. It was a little bit sweaty in the summer. But it was neat. Brooklyn is made up of a lot of people that aren’t from Brooklyn nowadays. A lot of people move there. It’s just the kind of energy.

So, what do you think of Brooklyn? Do you like that energy?

At least, in Williamsburg it seems that way now. Other areas are different.

OK, but where I was, it was a whole bunch of young people, right?

So, I liked it. It’s interesting.

Did you frequent any establishments in Williamsburg?

Well, there’s something by there. What is it called, Union Pool?

You threw a few back at Union Pool?

Yeah, I went there once and there were a lot of young people. They had a Taco Truck – that was a little bit California there. It didn’t move, it was like planted there. You could tell a lot of people were artists and musicians and writers and stuff. It had that kind of energy. But most of the time, I was in the studio working. You know, in the old days I only played Brooklyn once. And it was in 82’.

Where did you guys play back then?

It was called the Brooklyn Zoo, it was some disco. Because everything was happening in Manhattan but I think it got too expensive there…

Right see, so that was a big change. First it was Hoboken for a little bit, but then that got expensive and things started going to Brooklyn. So, things are interesting. I’m a guy who’s lived in the same town for 43 years.

Did you expect to end up in San Pedro for so long?

And did you fall in love with it at some point?

Yeah, I like it a lot. It’s a harbor town. Much different then the rest of Southern California. It’s got the harbor, and longshoremen, the docks, but it’s also got the cliffs, so it’s got some nature – not just a track home and strip mall thing, you know. It’s pretty interesting.

I’ve heard you regularly go kayaking in the harbor. What’s the longest you’ve ever been out there?

What is that like? Is it like swimming, where you are in your own head the whole time?

Well, yeah but you got to be aware of the sea. It deserves respect, it will drown you. But it is [solitary], you are out there, you are actually being carried by the water, by the rhythms. And then there are the sea lions and the dolphins and the pelicans. The big container ships, the fishing boats; it’s a trippy world. It’s you in your own mind. It’s like that on a bicycle too, I do that also. It’s a man alone thing – you listen a lot.

What’s your favorite time of the day to write music?

I do a lot of it then. I don’t have the bass in my hands but I like to write when I’m on the bicycle or kayaking cause its not confined to my fingers on the thing, its more like making it up in the head. And getting the rhythms from nature.

Yeah, absolutely. I have heard that Wallace Stevens used to write his poetry as he walked from his house to the train everyday as he went to his job as an insurance salesman. People say you can hear footsteps in the rhythms of his poetry.

Yeah, I heard that Tesla came up with the AC current when he was walking in a park thinking of a [Faust] poem.

There have always been those footsteps in your music, this kind of elusive thread where you can tell it’s a Mike Watt piece without it being entirely definable. How would you describe your own thumbprint, if you could?

There’s a tough question. I don’t know; kind of lunatic, kind of egocentric, kind of bass-centric. Maybe the observer is too close to his measurements. It’s hard to tell. Sometimes it’s kind of mixed up. Sometimes it seems very focused and idiosyncratic. It seems a little driven. In some ways, a little bit sentimental.