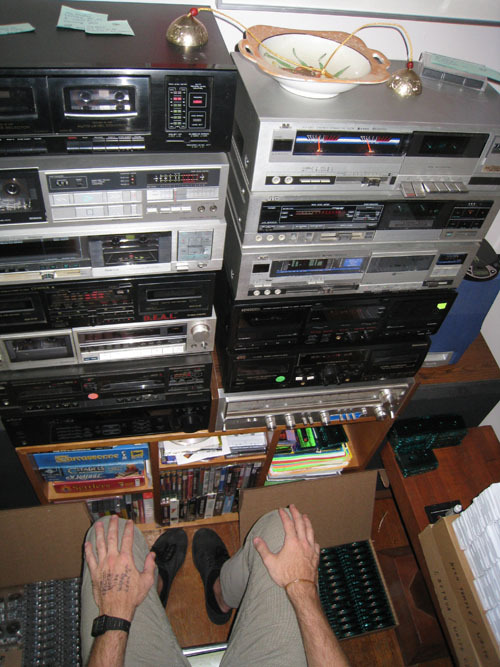 Like many small labels, Iowa City-based Night-People began as a way for the members of a band to release their extra material. This is a case of the scheme out-living the band. While Raccoo-oo-on has one more album to release before it is completely, officially defunct, Night-People is bursting with potential energy as it continues a fervent release schedule of vinyls and cassettes.

Shawn Reed and Andy Spore began as band members who curated and managed the label, but with Spore's move to L.A., Night-People has become a more central focus for the 27-year old Reed, who now runs the label out of “a cheap two-bedroom house” with help from another Iowa City local, Ryan Garbes. The small house is a stand-in headquarters for an unofficial complex of activities, including basement space for a silk-screening studio and a practice space for shows and recording, a “pretty massive cassette dubbing station” upstairs, not to mention an inn for wayward travellers (like High Places and Ponytail, two bands that were stopping in Iowa City at the time that this piece was being compiled).

Welcome to his world: “It would be nice to be not quite so poor someday but whatever I'd rather do what I really want to do then compromise my time on the planet just for sake of more security or comfort. I like the challenge of being marginal and jobless essentially and trying make it work.”

Along with playing in Wet Hair and doing “visual art stuff,” Reed says that “the label is probably the biggest thing going on with me right now.” And that visual art stuff ends up being a part of his label too, as he is often the man behind his releases' silk-screened album art. While the label releases many cassettes, (including one by recently featured Koi Pond, Pocahaunted and Time Life, Reed seems most excited about a number of LP's:

Russian Tsaralag,”I'll Hold It In”

This will be the second in a series, the first being a 12″ made for Reed's own band, Wet Hair. Philly-based FNU Ronnies “share some turf with other outlaw weirdo Philly hardcore acts like homostupids and Clockcleaner… Total hardcore and punk filth mixed with strange chrome-esque psych vibes and industrial strangeness, pretty heavy and raw really industrial sounding, like a cyborg Middle Earth band.” Middle Earth works. Their track here is called “Golem Smoke”. Wait for it to break out into a sludgy riff to hear the cyborg vocals. Wait for the bridge to hear everything melt into a cataclysmic pit of scorched skronk.

To be co-released with Arbor Rec. Kites is another Providence-based artist and Earth Crown lives in Baltimore. Their bands names are almost comically aligned for this split release in the degree to which they match their individual takes on post-industrial static mongering: while Kites flies with the birds, Earth Crown is bound to heavy, iron ore rumbling.

To read more about Peaking Lights, read our past posts about them here and here.

Here's a hot-off-the-press 11-minutes and 11 second song from their upcoming Night-People LP that takes a sharp turn towards abstract, melodic dub:

Wet Hair is in many ways a spin-off of the winding down Raccoo-oo-oon. It includes both Reed and his Ryan Garbes, both former members of the band and the two most involved in running Night-People. According to Reed, “Wet Hair is all about trance punk, sort of electric gospel infused noise.” It's good-timey and full of jams without compromising a bit of the harsh, scattered noise that in some ways marks a cornerstone of the ever-burgeoning label's releases.

The train don't stop anytime soon. If anything, I hope this post demonstrates that Night-People is a way of life, not a business scheme. Look out for releases early next year for a Kites-offspring project called Daily Life, a Factums-offpsring project called Yves/Son/Ace, both of which Reed characterizes as “vintage drum machine-backed creep out synth industrial pop sort of bands.”