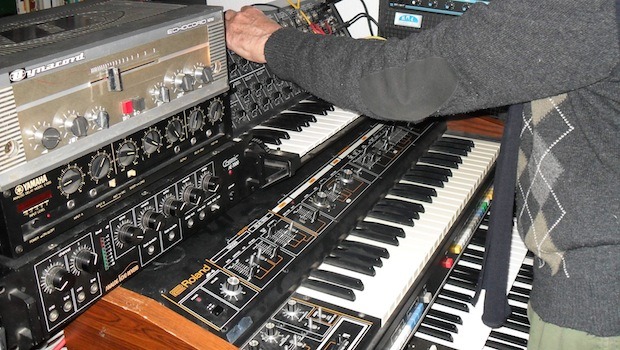 What means this fascination of beeps, clicks, moohws and sissles and their hardware parallels in knobs and sliders and keys?

Maybe it's the unforeseen possiblity, or nearly impossible variation of patterns and ornaments, like a puzzle that changes colors while building its whole image.

Sometimes you feel like: “Oops, where did this nice sound come from?“ and then it disappears again. And sometimes, while painting with sound, a harsh and not wished-for disturbance or technical failure leads you to a detour in which you'll be kidnapped to new shores never seen before. These improvised Soundscapes include the musical possibilities of tension and relaxation, of winning and failure, of noise and silence, all of which are the complete opposite of what you can see on stage in concert: two men standing in front of their gear, nearly motionless.

Gunther Buskies of BureauB asked us to produce our new album Fragen exclusively with analog synthesizers and vintage equipment. For me (Onnen) what a pleasure, because this is my musical home since an old tape recording of Hans Joachims Selbstportrait (self-portrait) came into my life at the age of 14 in 1987. I have looked for analog synthesizers since and found a Roland Jupiter 4, a detuned horror, but lovely, lovely machine. I began my “analog” era while Hans Joachim was pleased with digital samplers, and home recording facilities and playing on real piano took more and more room in his composing and concerts.

The analog instruments which we used for Fragen, in categories, are:

An example of the strange uses of analog instruments can be explained on the track “Josef Z“.

The sound of the rhythm section of the Yamaha organ fed into the signal input of the MS 20 is triggering the internal oscillator and is then modulated by its filters. This treatment gives “Josef Z” that fragile but leading impulse line. The ground of the track is a changing harmonic string-like scheme played with the CS 70 M, on which the sound of the Jupiter 4 carefully sprouts its little variations.

(Above: The Yamaha CS 70 M and the Fender Rhodes stage piano which wasn't used in the recording.)

Why do these sounds appeal to our attention? I can't explain it for sure. Qluster's music is far from being the result of a noisy technical accident, of simply tweaking knobs. Nevertheless, randomness can have minor influences on our studio work and concerts, but hopefully in a well integrated and formed way, in working with our ears, minds and hands, during the process of building new musical structures.

And even visually, it's a new challenge and enrichment for these creational moments, now that Florian Launisch, an artist from Vienna, extends our levels of improvisation with his wonderful video performances in concerts.

The only real problem with analog equipment is weight and proportion (maybe later we should travel with monotrons and stylophones). We hope to see you in concert. To be continued.

PrevPreviousThe Many Faces of JG Thirlwell
NextGeeking out with Ty SegallNext