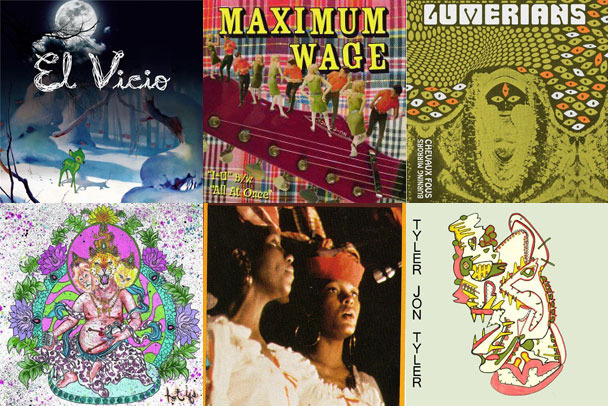 Our huge mega-massive update this week comes courtesy of our fair-haired amigos at Rococo Records.
We're citymates with this lot, and we couldn't be happier to have
another top-notch label added to the city's already stellar phonographic
records producing arsenal. That said, we've got a heaping helping of
sounds to get to this week, so let's go ahead and push this wagon off
the cliff, shall we?

Their name might be Spanish, but the group of guitar-toting wastrels that answer to El Vicio
hail from France and are part of the new breed of psych-punks alongside
Cheveu and The Anals. Here they offer up a triptych of pounding scuzz
anthems – “Longanisse” b/w “Death Trip 2024” and “Trash” that do their
country proud. While technically the b-side, “Death Trip 2024” is the
main attraction here; its name is particularly apt as the whole thing
speeds along at a breakneck pace, a landslide of riffs so impossibly
filthy that they come with their own bottle of Windex flanking a
caveman-type rhythm only to slash its jugular with a flail of
six-stringed fury as the whole mess is finally pushed so far into the
red that they had no choice but to shut the whole goddamn thing down.
That's not to say that the true a-side, “Longanisse” is any slouch. On
the contrary, the song, which features vocals by the mysterious Mu (who
also cropped up on a recent Liminanas single if memory serves) is a
massively-reverbed slice of primo garage rock with suave, talk-talk
vocals over the top, making the whole thing sound like Gainsbourg given a
Sonics-like enema. As if that's not enough, the cover's got a
particularly alien-looking Bambi strolling across it, and seriously,
what is more punk than fucking with Walt Disney?

Despite the fact that Maximum Wage's
ex-members of list reads like a veritable history of Chicago rock (Red
Eyed Legends, The Ponys and Submarine Races to literally name but a few)
they manage to sound like no other band in town on their debut release,
“I-U” b/w “All at Once”. They carve their niche into the scene with
“I-U”, which kicks to life via a slew of corrosive pop hooks, courtesy
of Ian Adams and his heavily reverbed Rickenbacker whirls, which, appear
to be his deadly weapon of choice here. Flipside “All at Once” is
oddly redolent of UK pub-rock kingpins The Motors, in terms of attitude
and execution; both exude a melodic brusqueness that belies their true
pop chops, yet both are shot-through with an inherent toughness that can
only come from having to wrestle your gear away from drunk punters who
only came to the gig to get out of the rain. A definite sleeper hit and
occupant of many spins on the ol' motorized platter.

While it's difficult to pick a favorite out of this batch, we do believe that the Lumerians'
“Burning Mirrors” b/w “Chevaux Fous” is going to take the top honors
out of this lot, both for its superlative psychotropic sounds and
retina-slashing cover art. The band's eponymous and self-released debut
12″ hinted at good things to come, however, nothing could prepare us
for the gaggle of brain-blazing psych-warriors they were to become, and
here they unleash two white-hot torrents of lysergic rock 'n' roll that
put them clearly in the same arena as Wooden Shjips and Carlton Melton,
both of whom also call SF home. “Burning Mirrors” begins its
organ-heavy life riding a fantastic fuzz bassline, guitars oscillating
wildly as FX pedals are stomped and beaten before they reach down deep
and send the track into a whole new Nebula with a synapse-frying
freak-out of epic proportions. “Chevaux Fous” is more subdued in terms
of tempo, yet they utterly pile on the vocal effects until the track
winds up sounding like a scrambled alien transmission from a planet
inhabited by Sky Saxon and millions of little green swirlie things that
make your retinas go buggy like a kaleidoscope filled with LSD. Not
that any of these releases are going to stick around for long, but we
suspect this one might disappear a tad quicker than most.

Following that we've got the swansong (in single form) from Denver's 'we barely knew thee' rockers the Hot IQ's' “Houndstooth” b/w “Iggy Pop”. The first thing that'll catch your eye is the rad Kelsey Brookes
cover art, but then the spitfire guitars and revved-up rhythm of
“Houndstooth” drop and its ultra-catchiness swings your head round on a
swivel, and that's before its clever “release the hounds” refrain that,
we'll assume, is a sly nod and a wink to Mr. Burns, bum rushes your
eardrums and refuses to let go. The b-side is an ode to the godfather
of punk himself, “Iggy Pop”, and it's a brief, snarling little bugger
that both pays proper homage to the peanut butter licker and hocks a
huge loogie right into his gob, meaning they'd probably duke it out
pretty good, but would wind up best friends in the end. Tis better to
burn out than to fade away, at least so this lot would reckon.

Next is another bunch of French freaks, only this crew answer to the name The Dreams
and their “Body of Mickael” and “Palm Street” b/w “Afrikaner Dub” tour
single is merely a pre-cursor to an upcoming full-length this lot have
coming out on Rococo that's certain to be a fucking brain-blaster.
While technically the flip, “Afrikaner Dub” is the starshine here,
sounding like nothing so much as Suicide cranking tunes with Adrian
Sherwood behind the decks, a huge, molasses-paced beat oozing out of the
speakers infected with bouts of echo and sustain, snarling, heaving and
panting like a panther with its tail caught in a cobra pit. The two
tracks on the a-side are both mechanized odes to future primitive life,
with the sleazy incantations of “Palm Street” sounding especially vile
as they cough their way out of your speakers, infecting you with the
germ just like it was 1865 before its rusty knife blade melody shears
your eyebrows clean off. Bloomers held up with iPod cords, is this the
future of steampunk? If it is, sign us the fuck up. If not, well, on
your merry way with your octo-monocles and jet packs, then. 300 copies
with awesome UK-styled center holes.

Bringing up the rear here is co-ed trio Tyler Jon Tyler's “Separate Issue” b/w “Paul”, a blast of jaunty indie pop that falls
just on the right side of twee. The honeyed vocal wallop and galloping,
tuneful riffs of the a-side remind, in a good way, of the halcyon days
of late '90s indie pop, especially the variety that was peddled to great
effect by labels like Kindercore and Blackbean & Placenta. Turn
the platter over and you'll find that “Paul” is the most forthrightly
rocking (it's redolent, if you close your eyes, of Dressy Bessy in their
slightly more subdued moments) thing we've heard from this lot yet, and
despite the fact that it knocks your socks off, it retains the band's
gooey pop core and ear for hard-candy hooks. Honestly, we hope it's a
pre-cursor to a direction they continue in for many moons to
come.

We know it's been a few weeks, but we think we've
made up fr it by delivering this mega-massive dose of new sounds for
your end of summer hullabaloos. If we are back on track (and we're
fairly certain we are) there will be an update from our favorite friends
Sacred Bones (making a welcome return to releasing 7″'s) as well as
features on newer labels like World Famous in SF and a few other
surprise visitors in store over the next month or so. We've only
steered you wrong that one time with that female-fronted ELO cover band
(with guest mimes), but we've apologized profusely for that, so we think
it prudent you stop back next time for another go-round of The Singles
Collection.