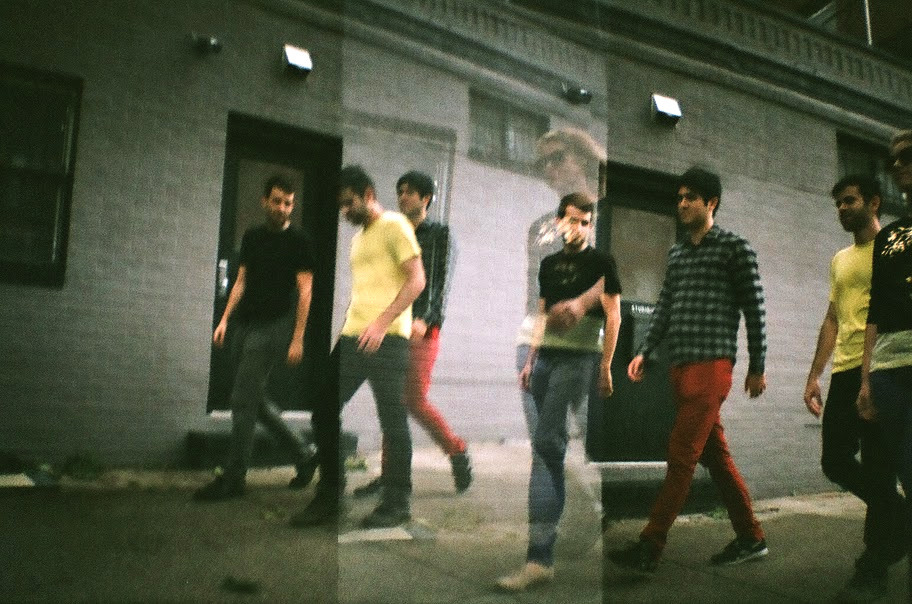 I think “House of Games” would make a pretty good band name. It also has a sinister edge to it. He’s got a lot of great phrases in his titles and in his writing in general.

How did you guys come up with the self-described “tremolo-haze headphone symphonies?” It's a great description of your sound.

We came up with one night after practice, just sitting around drinking coffee. I just stumbled onto that combination of words and it struck me as pretty accurate and also held some mystery.

Opener “Los Angeles Guitar Dream” is an excellent intro to the album as well as EP. We were wondering if this was your homage to LA production by way of Brooklyn?

It wasn’t intended to be an homage to LA production. It’s more a tale of a situation that seemed very “LA” to me – superficiality, losing yourself in a big city, etc. Though of course you could also say that would apply to New York. But I always pictured the character in LA, even though I came up with the initial idea for the song while working at a nightclub in New York. I overheard this girl talking hysterically about going to LA to escape something and I filled in the blanks myself.

What do you all feel separates the LA and NYC scenes other than geographical coast disparities?

I can’t say I know too much about the LA scene honestly, even though our bassist James is from LA.

Tell us how that Sun Glitters remix of “Know No Violence” came about.

Over CMJ week we played a show together in this pretty small loft in Bushwick. It was a pretty refreshing show to play after a lot of the nonsense that goes along with CMJ – huge, indifferent crowds, corporate sponsorship, etc. This was a DIY show in a kitchen with speakers hanging from the pipes. You could actually see the skyline out of the window. Sun Glitters played right before us and we hit it off and exchanged music. Not long after we asked if he wanted to do a remix. It was pretty serendipitous. I love what he did with the song. He definitely took it in his own direction and made it his own, especially the outro.

How did you all become obsessed with reverb for the Gold Fools?

I think I’ve always been very interested in how sound reverberates in space. A lot of my favorite music makes creative use of reverb and depth of field. Mike, who plays drums live, but really plays a lot of other instruments and helped produce the album, is also just very finely attuned to sound and the particular aspects of different reverbs. We were obsessed with reverb in a very specific way- it’s not like we just wanted tons of reverb and listened to the Jesus and Mary Chain all day. We would spend hours trying out different reverb settings, tweaking sounds, comparing mixes, re-amping things, and just really making sure all the sonics were exactly how we wanted them to be. It was a pretty exhausting process.

Seemed like you all had been working on this album for a couple years now. What are the pros and cons of taking your time to make a full length versus rushing the process?

The main drawback is that towards the end of the process, we got pretty burnt out on some of the songs and it became really difficult to enjoy them. We also spent a lot of time thinking we were just going to mix the album ourselves when we eventually realized we needed an impartial third party to step in. We began to get very passive-aggressive about some of the songs before that. We’d be working in one of our apartments on something and I’d step out to get a sandwich and by the time I came back, it’d be a drastically different song. There were a few times that happened. The advantage of taking our time is that a lot of the songs changed very dramatically from where they started. A few songs we recorded several times, from start to finish, and I think where they ended up was much more interesting than where they began.

Some folks enjoy the rough n' raw cut with the speed through approach but you guys seem to really take your time to build your tracks with a lot of care. I feel like your music is a great battle between the guitar, electric and acoustic, and the great dissonance created through keys and other treatments. If you all were on a desert island and you could bring either a keyboard or a guitar what would it be?

I would definitely bring a guitar because I enjoy playing guitar much more. I mostly play guitar and play with keyboards. Plus on a desert island, I imagine there’d be a lot of bonfire sing-alongs, right?

Speaking of which, real quick; the keytar: In? Or just another revivalist fad that's already out?

I didn’t even realize there was a keytar fad happening! I’m not really into them. They look too goofy to take seriously. Though I’m a huge fan of old vintage synths that have a lot of character to their sound.

I dig your the pay what you can approach with Gold Fools on Bandcamp. What brought you to jump on the choose-your-own-price bandwagon?

We really just wanted people to hear this record and thought that was the best way to get it out to the widest audience. It was a pretty easy choice to make.

How do you feel about the industry's push to move music away from the tangible (vinyl, CD, tape…) and semi-tangible (mp3, wav, flac…) and into the digital cloud nebula?

I think there are still a lot of people who are very excited about vinyl and I don’t see that ever going away. We all cherish vinyl and tangible objects. That being said I think it’s great to have the digital options today and I see nothing wrong with the industry adapting to that. We’ve all become pretty big Spotify users, and I’m also a huge fan of ex.fm.

What are you all excited about for 2012?

We’re pretty excited to get on the road much more now that this album is done and out there. It’s been rewarding to start playing these songs in front of people.

What's next post-Gold Fools for Spanish Prisoners that you can reveal?

We’ve got a few small things that we’re releasing that we’ve been working on. And we’re gonna be touring and going down to SXSW. And drinking way more coffee.