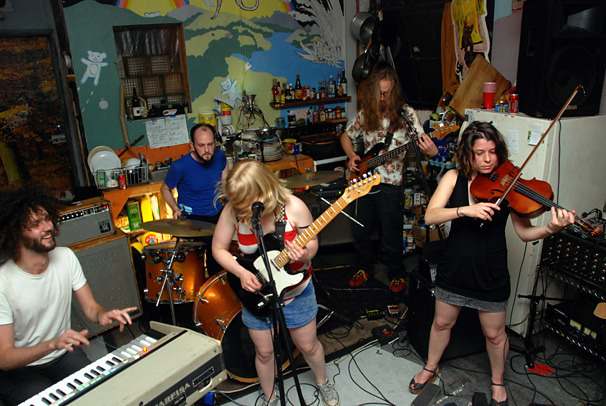 The whole band jumped in for an in-depth Selection series.

Whitney Houston, “How Will I Know?”

This song is my jam. It’s not enough to say it lifts the spirits because it actually seems to inject power into my body. I don't know how it does that, but I do know it’s not just through my thin nostalgia for a roller rink in Texas—where, granted, it played in heavy circulation during my trips there as a kid. And it's not just the camp factor, though that’s also involved: the back up singers crooning “don't trust your feelings,” the black clad modern dancers in the puke-colored video, the bass gliss leading into the chorus, the sax solo schmaltzing over the transition to the final chorus. The overwhelming garishness of Whitney's voice, riding that glittery synth line, is for me, like a violently seductive childhood lived in rewind and fast-forward all at once. I can't get enough. –Clara Latham

The Ex + Tom Cora, “Scrabbling at the Lock”

The first time I heard this record was kinda like the first time I heard “Venus in Furs.” As an early teenager still small enough to be renting a full-size violin strung as a viola from a crappy rental house in Pittsburgh, I remember hearing Cale’s open fifth drones, ornamented with subtly violent glisses, and thinking… what is that sound? When the tape case (!) helpfully informed me it was a viola, something happened… something like realizing that my instrument offered a world of possibilities that I had never imagined until then.

On “Scrabbling at the Lock” (1991), a much wilder collaboration than its more polished follow-up, “And the Weathermen Shrug Their Shoulders” (1993), Tom Cora does a similar number on the cello’s reputation for mellow tone and soaring lyricism. Soloing almost constantly throughout the album’s fifty-plus minutes, Cora develops a chameleonic relationship not only with the entire string family, but with The Ex’s formidable instrumental forces, as well. At times, he’ll blend effortlessly with G.W. Sok’s canine vocal ballistics, at others screaming interminably at the top of his register with a harsh violinistic thinness, only to return to cavernous bass-y pizzicati and luminous, idiomatic double-stops. –Amy Cimini

Fleetwood Mac, “What Makes You Think You’re The One”

I know going through a Fleetwood Mac phase is not particularly noteworthy these days, but Amy just bestowed upon me their massive masterpiece, Tusk, so you'll forgive my belated revelations… I always thought something funny was going on with Mick Fleetwood's drumming, but this album really seals the deal. His performance on “What Makes You Think You’re the One” is totally scattered and undisciplined, as though he's got this dialogue in his head with Lindsey Buckingham that only makes sense to the two of them, an impulsive logic that drives the song, however recklessly. It's brilliant…and hilarious. The stubborn, jackhammer beat raging throughout, interspersed with weird, cocaine-fueled flourishes, was called by Buckingham “one of the classic drum tracks…one of the great drum tracks [he's] ever heard.” Yet there's something almost goofy about it, like listening to an incorrigible child throw a temper tantrum. The ill-chosen solo crash hit at the end makes me laugh out loud (and there are equally confusing alternate endings in the following Youtube selections).

Apparently the song was recorded “late at night in the studio” with just Mick on drums and Lindsey on piano. The drumming is improvised and sporadic, as though it were done in one take. He never settles into the beat, constantly tinkering, sometimes switching to double time, but only for a couple measures, then back to the jackhammer again… The whole track sounds haphazard and almost accidental, and yet it's reportedly one of Lindsey Buckingham's “top-five moments with the band.” That's right… he called the drummer “the band.”

The first Youtube clip is video from a rehearsal of the song right before their Tusk Tour in LA, 1979. It's stilted and stiff, but powerful and creepy, similar in affect to the album version.

This second clip is audio (and stills) from a 1980 live performance of the song—about 150% the tempo of the recording and about 1000% of the energy (read: drugs). Truly remarkable. How did Stevie hold up through this raging assault every night?

I used to stay up on summer nights listening to James Brown Live at the Apollo (the 1968 edition) and because the recording has such a great sound and a sense of location I would always try to “see” the event in my mind. But for some reason I mostly just pictured the audience and not the Godfather himself. This man, the source of those inimitable screams and wails (who sometimes disappears from the mic for minutes at a time while the band steams along) was simply too much for my imagination. Then my uncle showed me James’s performance on the 1964 TAMI Show and suddenly everything fit. The contortions, the drops, the insane shake-o-matic footwork, the spins, the claps… it was all there. Brown performed in a way that was so incredible and unique, even being able to see it now I can hardly believe it. The state of Brown's hysteria and possession here in “Please Please Please” is, of course, manufactured in the sense that he went through this little stage drama every night. But it’s still incredibly intense and real: by the time he shouts the word “please” 37 times in a row he's fallen to his knees more times than Jesus did on his way to the cross and had ten times the impact. Religions have been founded on far less inspiring material than this. –Sam Kulik

My friend Fat Bobby over at Oneida laid down this incredibly ripping organ line in an otherwise fairly free-form cut off of their early 2001 record, Anthem of the Moon. I first heard this song six years ago on my roommate’s vinyl and had a mini-revelation that whoever this dude was on the organ, he managed something I had never heard before. In between two hard-panned tracks of junkyard Hendrix riffs, a maniacal organ riff races on and on, giving this song a haunting mechanical backbone, a kind of cold, inhuman pulse. Inevitably, headphones reveal an ebb-and-flow of the groove, an early attack here and there, but all the better for this band that I’ve long admired. If playing 6000 bass notes in 10 minutes weren’t a physical feat, what would it be worth anyway? For the uninitiated, this whole record is worth a close listen, provided you commit to a late night drive so it can happen from beginning to end. Of all the O’s output, it still remains my personal favorite, coming at a moment where these guys shed a bit of their youthful goofiness and began to compose noise with a more deliberate (if especially dark) sense of imagination. Oh—and the Grateful Dead reference shouldn’t be lost on us—as a totality this exhausting record plays like the nightmarish bad-trip version of the classic 1968 record Anthem of the Sun. —Mike Gallope