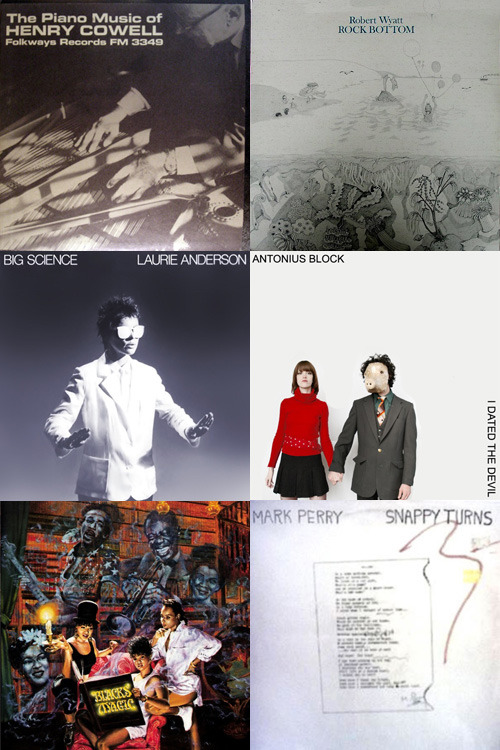 It was minimal, all about less, never more. She’s speaking, sometimes speak-singing and it is so engaging. Makes you realize the voice can do many things in song. You don’t have to scream and shout (all the time). The resonance, timber and inflection of the voice are so calm and beautiful and playful. Who doesn’t cry when she says “O Superman, O mom and dad?” Don’t think too many people pulled this off, at least not to the degree she does. She tells stories. And the music, in all its sparse glory, gives these stories another dimension. Not to mention the winding and openness of Anderson’s song arrangements, taking the usual song structures outside of the box. We like this very much. (AA)

Early 20th century piano man and composer who pioneered preparing one's instrument. Our favorite track (and his most acclaimed) – “Tides of Manaunaun.” The tone clusters (requiring full use of one's forearms on the piano) are pummeling, with triumphant melodies on top. In general, such a massive sound, yet like Laurie Anderson, so minimal. The album continues. His rhythms are so fierce. His melody choice specific, and deep. Very repetitive. In a world where dissonance is watered down, here it is raw and beautiful. To this day, a refreshing use of space and sound. (AA)

“Tides…” can be summed up for me as the most potent, anguished release. I'd been waiting all my life to hear this song, when I did it was like coming home. (SR)

If you ever find this, please get me a copy, I will pay you back. Compliation released by Bob George's One Ten Records. I searched for years for this, looking for Laurie Anderson's “It's Not The Bullet That Kills You, It's The Hole”. Finally found it and discovered it's a freakin themepark of the most wonderful things. As far as I can tell, many are not anywhere else. Meredith Monk's “Rally”, Diego Cortez's “You Pay”, many many more. Sonic heaven. (SR)

I can talk about this cuz I wasn't on this album. I joined this band because of Andrya and a number of timely circumstances. Will be forever grateful, as it musically is still some of the most lovely and odd/perfect choices that immediately crawled inside my brain with a certain familiarity, like “here's what we were looking for, it's been here all along.” Jorge DoCouto rips into the collective unconscious and is a guitar inspiration, and Tina Schula is the epitome of creepy-cool-as-cucumber. Released by Austrian label Trost. (SR)

This is the first full-length from Siouxsie Sioux and Budgie's side project away from the Banshees. The songs are stripped and playful. It's mostly just Siouxsie's voice and Budgie's primitively eclectic percussion. This might be all you need? I often dance around the apartment to “Gecko” & “Sky Train.” They make me a believer. (AA)

This was Wyatt's first album post his fall to paraplegia (rumored to have been written in the hospital). Formerly the busy prog drummer for Soft Machine, here Wyatt goes inside himself now playing mostly keys and using his voice. It's very personal and honest despite Wyatt's seemingly silly vocal tendencies. The songs take their time, slowly moving to weave complex and organic arrangements. He says in the liner notes, “the loss of my legs may have given me a new freedom.” I had to sit with this album for quite a bit before I could enter it. Now it's a source of great joy. (AA)

I think I have a fetish for obnoxious British crooners. This was my first introduction to Mark Perry (better known from his days in the sloppy post-punk band Alternative TV). The lunacy in this man's voice is potent. Words seem so asinine but are always so engaging with Perry's spoke-shout and slobbering delivery. Totally deranged. The guitars are jagged, bass lines obvious and beats sufficiently danceable. All very linear. All very basic. All very awkward. I love it. Our song, “Outside” (soon to be released on our upcoming full-length!), is a reprise of Perry's “Inside.” He sings, “Inside one another. Inside. Like two kittens in a womb. Inside.” I'm not sure too many other man can get away with saying this and still have the ladies swoon. (AA)

This came in at a close tie with TLC's Ooooooohhh… On The TLC Tip (1992), which I probably listened to more in life… But essentially, both were huge building blocks to my childhood. I can't listen to either more than once every six months or so now, but when I give it that time, I'll walk around jamming on my headphones and feeling like a god. If you've never wished that you were in one of these bands, there's a tiny chasm of understanding between us that will never truly be bridged. And if I look back with an analytical eye, these may have been early experiences for me hearing women in music talk in a less than typical way. Casey Kasum raised me well, but when I heard these voices and beats, I knew myself better. (SR)