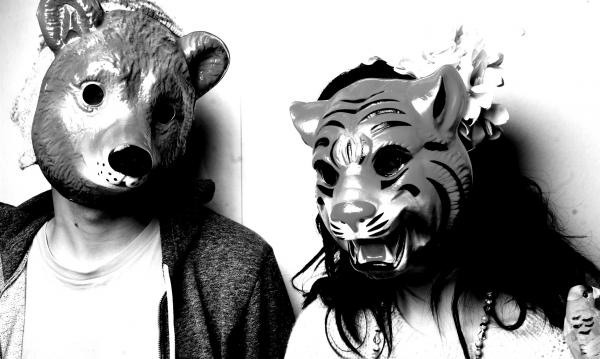 The London based duo have been together less than six months, but their silky future dance music has quickly percolated across the pond. We spoke with Joni Juden about East London, fake genres, and Peter Gabriel's slap bass.

So how do you feel about being pigeon-holed as a “lady duo“?

Yeah, pretty good considering I'm a male specimen. I think that classification has something do with my name being Joni, although I can't be entirely sure.

Who can ever be entirely sure. Do people dance at your shows?

We're doing a lot of support slots for bigger bands at the moment and are opening shows at like 9 pm, so I reckon people are a bit conscious (that is, sober) about going wild that early. Or maybe no-one simply finds our weird jams danceable.

Do you have a crush on the Vivian Girls?

I've got a massive lady crush on all three of them.

Are you in school?

Nope, but I teach guitar to kids and sometimes I do it at schools. Scary shit.

How's your part of London?

Representing East-London, Bow to be exact. I live next to a market, which is particularly grim this time of year but you can get some cheap frostbitten veggies and knock off D&G sandals and other useful stuff. Sara's few miles away from me in Stoke Newington, which happens to be quite lovely actually.

There's a pretty healthy and diverse music scene in East-London I'd say, Dalston in particular seems to be where it's at right now. It has a good vibe about it and folk there throw pretty sweet warehouse parties at all these beat up old buildings that are still scattered around the area. I'm not sure how active we are in any social circles though. Guess we need to go out more.

We're throwing a launch party for our EP next month and have asked few of our buddies to play, Dignan Porch who we've played before and they're awesome, and some more experimental/improvisational guys, like Drugg and stuff. I'd personally say that early 90s grunge and hip hop are especially close to my heart, as far as old music in other places go, perhaps simply because that was a time when I started to be aware of music. It's good to see and hear some of that grungy stuff creeping back in today's music, especially with the whole bedroom recording vibe happening everywhere.

If I'd only get a penny every time I was asked this. I would love to be an anthropomorphic bass guitar so I could ask Peter to tell his bassist to stop hitting me with his fat thump. Slapping is not cool.

Two words that looked quite nice together when I typed them on our Myspace.

I guess if we started manifesting it, but it's obviously just a stupid term and I don't think we'll be doing that. I just thought it was funny when I thought of it one night down the pub and with all these crazy genres and sub-genres and sub-sub-genres flying around, we toyed with the idea of actually calling our music that. It could mean anything, you know?

Acoustic and electric percussion, the obvious sampler and couple of synths and a whole bunch of fun guitar pedals. Then there's wires and loads of power supplies all taped together in a joyous mess. We're actually in the process of shaking up our live set-up a bit and there's been talks of some vines and strange taxidermy and I might start playing bits of guitar live too.

What, if anything, are you trying to do in your music that falls outside of the normal dance music/electro paradigm?

Well I think every band or artist fancies himself as being all different and special but I guess one thing what we are trying to incorporate is an experimental angle to our soundscapes, especially live. Although I wouldn't exactly call our music experimental, I'd like to think there's a certain element hidden under all that dreamy poppy-ness that can be traced to more ambient and psychedelic things. Then there's a definite r&b and hip hop vibe lurking in the production side of things, on some of our newer stuff especially. And we want our music to sound like it came from the earth and the nature. But not necessarily the one we're living in.