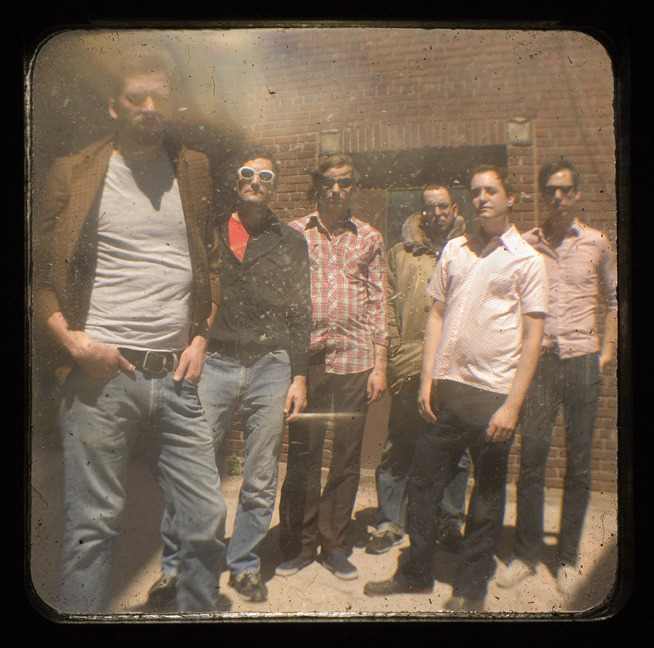 Flying into Vegas is a surreal thing. While the airport looks like every other airport in the country, just beyond those doors lies a world full of zombies, machines, drugs, booze, pools, wealth, stupidity and frightening need. I fled to Vegas to meet up with White Savage.

White Savage is a drink: Makers laced with Jager.

White Savage has rules: No one under six feet tall allowed.

White Savage is seasoned: All but one of these heathens have been or are in bands you should know if you don't already. Jered Gummere's from the Ponys, Jim McCann is from Baseball Furies and Tyrades, Colin Smith from Screaming Yellow Zonkers, Greg Sharp's from Chin Up Chin Up, and Ryan Weinstein was in the Returnables and ZZZZ. And then there's Bob Johnson, the saxophone player who works the door at the Empty Bottle and had to kick out a heckler at the very first show he played with the band.

White Savage is a group of smart drinkers: While meth-addicted zombies shuffled aimlessly down the street outside the Bunkhouse Saloon where White Savage played, Jimmy sat at one of the early Œ90s developed computer card games, winning and losing money, but getting free drinks the whole time. During the course of the night, the bar's sole bottle of Jameson was consumed. We were the only ones drinking it.

White Savage is a mystery: Sometime masks are worn and the six members are no longer their affable, (mostly) Midwestern selves. They are primal savages who will surf on their guitars, swing from ceiling fans, burn themselves on lights, lie on the floor, walk out the door, scream, sweat and convulse.

White Savage knows how to pick a casino: Before heading to the Bunkhouse, Jimmy put down a bet at the Riviera and walked away up a Hondo luck was on the side of White Savage. After the show we made the debaucherous trek back to the strip and in short order wandered, drinks in hand, to Circus Circus, the run down Fear and Loathing mecca. Watching Roulette made me want to vomit and observing Craps confused the shit out of me but the fellas all came out on top. Vegas Lady Luck smiled on White Savage and we toasted her heartily.

White Savage is a brotherhood: White Savage was born in Chicago, sprung from the good time hang outs of three drinking buddies who all happen to have the spirit of savages running through them. The band rose from the ashes of one dissolved band through friendship and brought in members who needed “funship”: an escape from the parts of the world that bring you down, a place to hug it out when trifling bitches, shitty jobs, and cold cities try to keep the spirit down. White Savage isn't just a band that goes ape-shit, knocks your head back and smacks you into realizing the wonder of the world, hangs from the rafters and drills holes into the floor. It's a way of life and it feels all right.