If there is one thing that rivals my music fiendship (that does not happen in my bedroom, backseat, laundry room with the washer on spin), it is stand up comedy. Check the DVR and it is cluttered with Comedy Central Presents episodes and Secret Stash uncensored stand up specials — even the Lilliputian pimp Katt Williams got a chance.

I support my local Toledo comedy club, which is extremely taxing on my conscience at times: sometimes you have to endure the awkwardness of amateurs trying to hone their craft. But a chance to see true professionals possibly at the peak of their careers is an opportunity I do not pass up.

Selling out the Blind Pig is not difficult; it is another gritty dive that has built a reputation as an indie stopping-point in the Midwest. The Comedians of Comedy packed the Pig to the point where it was problematic to even get passed the door man. Patton Oswalt had already taken the stage with a brief warm up. He was discussing fucking someone’s mother in the ass with a few crowd members, but it acted as a proper set up to opener Doug Benson.

Benson, maintaining his stoner persona, rode his set into observations that only stoners would make. For example, seeing a caged dog with a sign on the cage that read “Warning: I Bite” led him to the conclusion that the dog should have actually wrote “Warning: I Make Signs.” The most memorable joke was a pickup line so vulgar yet undeniably amusing he claims he cannot help using it.

Guy to Girl: “Hello, my dick just died… can I bury it in your ass?”

Warning: This pick up line was tested later that night and was met with unwelcome results. Use line with extreme caution.

Following Benson was one of my favorite recently discovered comedians, Eugene Mirman. Were it not for his stand up I would still think it was an acceptable idea to try and steal a cop’s penis. Mirman’s sharp observations put airborne stupidity on blast, and then expand upon them with pointed absurdity. He told a brief story of a man in an elevator sarcastically stating that “there’s bigger elevators than this in Russia,” as though tiny Russian elevators were a common stereotype.

Mirman attempted to educate the audience on the importance of not smoking meth because, according to a newspaper clipping he found and read to the attendants, it hinders your ability to make coherent analogies. One apparent methhead in the audience loved the subject so much he kept shouting WOOO!, which prompted Mirman to rifle off piercing quips at the lunatic. It is always a treat when a comic can control the audience by attacking rudeness with quick jabs into the crowd, but keep everyone laughing— even methheads.

Then there is Maria Bamford, the shining beacon of hope in a drowning pool of vagina/importance of having gay friend jokes. Even though I had heard several of Bamford’s bits before, her mocking female comics who talk about how “ladies have a system” still put me in stitches. Her impressions of “typical females” come off so perfectly they’re like tenants renting space in her head, which is apparently also filled with an acute fear of being suffocated by balloons.

Brian Posehn took the stage next, told a joke involving pot and Super Mario that made Doug Benson laugh hysterically, and assured males that you can blow a guy as long as you shout “SLAYER” whilst fellating, resulting in a shout of “Slayer” from the audience after Posehn told a second blow job joke later in the set.

Patton Oswalt closed the night with all new material. I had watched an interview in which he said it was important to him to have new jokes for this tour. I could not agree more. At one point, while Patton was giggling about a song he had made up, someone yelled “Black Angus” hoping to hear a familiar bit. Patton winced out into the crowd in bafflement. This prompted people to shout a few other jokes, all of which were met with denial.

I typically cringe when someone tries to tell me a joke I have already heard, mostly because they screw it up, but even a professional doing a routine I have heard is mildly uncomfortable. I just cannot imagine someone thinking “oh I love that George Lucas bit so much… I hope he does that one tonight” like it’s Patton’s big single.

Patton did leave us with an update on a previous joke. Apparently, KFC has added a biscuit to the Famous Bowl which Patton called a “little tombstone to place in the middle of your bowl and write ‘your hopes and dreams’ on the surface in ketchup.” He went on to tell of KFC’s product testing procedures, including the inside scoop on a new product called the “Mega-Leg,” which is just what it sounds like… a freakishly gigantic chicken leg. As Patton imagined the scenario, something went dangerously wrong at the KFC laboratory and a gigantic fowl was created wreaking havoc on the facilities, breaking loose and killing a few campers, until it was finally destroyed before it could eat Paul Giamati. It was then decided that this giant leg should not go to waste, but tested on the good honest tax paying citizens of the Midwest states. 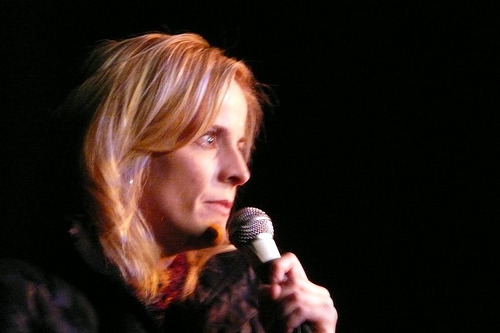 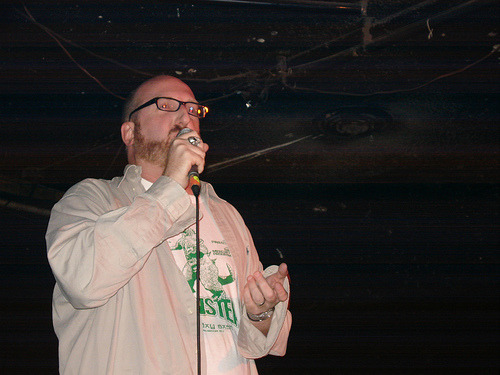 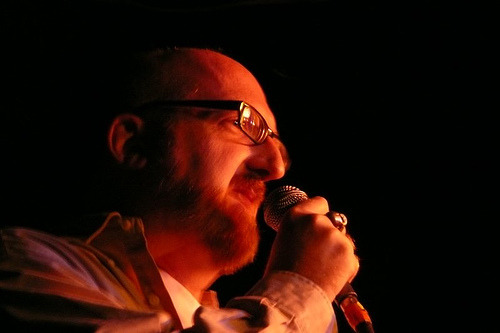 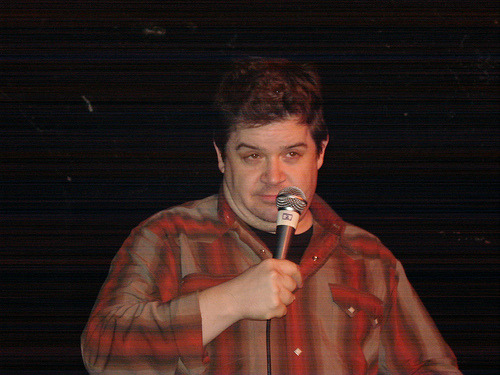 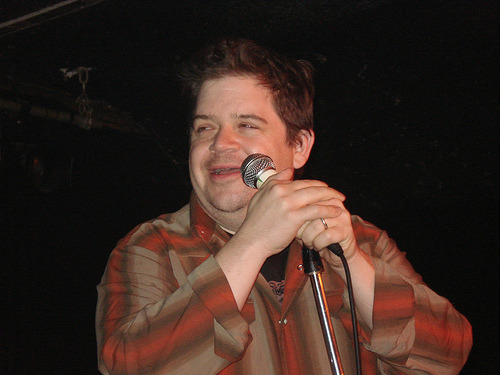