Friday night’s packed performance at Public Assembly was book-ended by paeans to the electric guitar, provided by the stalwart rockers of Bottle Up and Go and Suckers. Guest DJs Friends with Benefits and Kool AD (Victor Vazquez of Boy Crisis) provided synthetic stop-gaps.

This write-up is not about any of them.

Rather, it’s about an up-and-comer who falls somewhere in between the extremes of electric guitars and electronica-infused hip-hop. Will Johnson, who goes by the stage name Gordon Voidwell, stubbornly refuses to tow a musical line; he blends avant-garde jazz and spasmodic funk with upbeat pop melodies and sets them to blistering party-rock beats. Or, as online indie network RCRD LBL puts it, Voidwell’s M.O. is “to embrace the immense void that exists between seemingly opposite ideas of past and future, hip and dorky, pop and indie etc.”

But contradictions aside, a common thread ran through the Gordon Voidwell set list on Friday. In the audience, hushed comparisons to Prince abounded. More than a few songs begged comparisons to Huey Lewis’s vocal stylings. A funk meltdown worthy of Parliment capped the immensely crowd-pleasing “Ivy League Circus.” In a nutshell: circa-80s musical references fell like the disco-ball beams from Voidwell’s gold lamé undershirt. (Voidwell must be getting pretty sick of the comparisons—one blogger recently dubbed him “Cindy Lauper with balls.”)

Voidwell blends these compatible styles, gives them a vigorous indie overhaul, and harnesses them to Billboard-worthy melodies. In doing so, he neatly dispatches with the idea that “indie pop” is a contradiction in terms—this man can write a hook that would make Phil Spector’s head spin. The tracks “White Friends” and the aforementioned “Ivy League Circus” are indisputable favorites, and had space-starved show-goers doing the sardine-can shiver (dancing being another essential component of Voidwell’s music). After the set, MC Shayna Ruth Jeffers chided the sweat-slick performers for not playing “Vertigo on Cloud 9,” but otherwise there were no complaints.

Voidwell appeared onstage with collaborator Guillermo Brown (together, the two of them make up the act BILLLL$), who spent a good part of the set jamming on an instrument that looked like a wineskin-cum-ham-radio. Further investigation was probably in order, but this writer couldn’t tear himself from the dance floor. In the pop game, nothing bodes better. 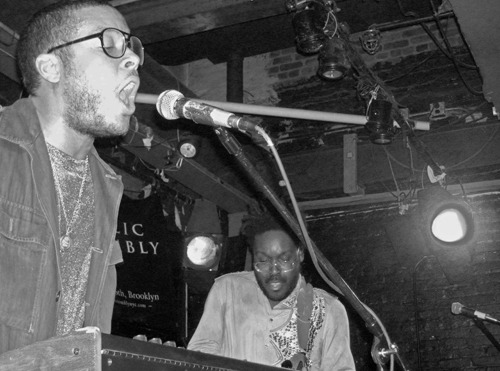