I get annoyed by people who quickly write off this sort of wackiness (and I do think that Deacon has earned the right to be called “wacky” unironically). There are countless antecedents to absurdist performance art. Dadaism comes to mind. The main difference is that Dan Deacon and his Wham City troupe would obviously never suffer the political oppression that weirdos of the past have dealt with. Deacon is safe, and his audience is soft-focused on d.i.y. scene kids instead of the public at large. Still, his power to alter the consciousness of his audience is pretty mind blowing in itself. There is no one else out there who can get 100 hipsters to hold their hands out in a circle for one person to run laps slapping high fives. Except a DJ at a bar mitzvah. Those guys are pretty absurd too.

Last night (a Tuesday, he reminded us repeatedly) was a sold-out march through d.i.y. venue hell, a sort of spring training for the crematorium that the Market Hotel will be when the summer hits if there continues to be no air circulation. There certainly are no windows; the walls were sweating with condensation. I personally exited the building (into a cold night) appearing as though I'd just pulled myself from a swimming pool, except that the swimming pool was filled with my own sweat, and maybe sharks, and I'd doggy paddled for dear life for about two hours. Enough whining: I got to see Health last night.

While the LA band does a good job of touring regularly to the east coast, their presence was certainly the rarest of a stacked evening (that also included Black Pus, Aa, Knyfe Hyts and Crime Novels). As always, it was a pleasure. I can't think of any bands out there that combine the sort of intricate interplay of destructive noise and cohesive song structure as they do. They're turned to eleven, running their lines through umpteen effects pedals and procuring a massive, damaged tonality that they release in exacting rhythmic patterns and premeditated squalls of chaos. And despite the various layers of electronics in the mix, everything appears to be delivered live.

You'd think this sort of precision bombing would lend itself to constipated facial expressions and stiff stage personas but their bodies are as much a part of their lucid performance as their virtuosic instrumental delivery. With their drummer faded to the rear, three frontmen in white t-shirts, faces turned from the audience and kneeling much of the time, thrashed and bobbed instinctively to their tightly coiled compositions.

Black Pus, aka Brian Chippendale, the drumming half of Lightning Bolt, was a relentless hour of hell-on-wheels percussion battering against a gusty pile of delayed, over-driven vocals and synthesized distortion. Some might find it alienating, others seemed to like dancing to it. I'm looking forward to hearing it at an open air show where the enormity of his mix has some space to breath.

Aa performed at the Hotel in the same spot a scant month ago, that time opening for Ghengis Tron. They showcased more new material this time around (I think), some of which was surprisingly “meditative”, or, at least, delicate and keyboards-focused. It was a novel angle for the Brooklyn four-piece, and a welcome addition to their dynamic range. We'll hopefully get to hear these angles and more on their upcoming Phil Collins cover album. Aa might deny that this a body of work exists, but we at Impose know better than to trust them at face value. We're looking forward to every track. Especially the “Separate Lives” collaboration with Prurient: 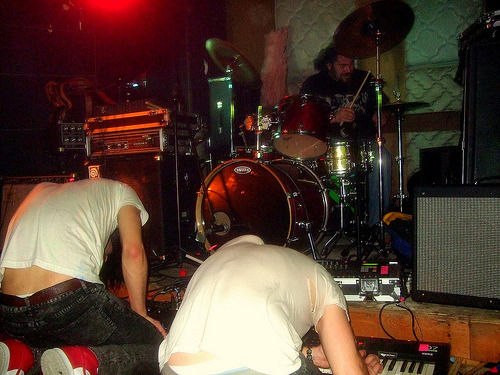