Like many of the grossly overpriced shows that appear with disturbing frequency in this town, Mashina’s Tuesday night set at Webster Hall begged the question of just who the hell was willing to meet the asking price. But there was an added layer of mystery, namely, the mystery of who the hell would be willing to meet a $55 asking price to see a band that almost no one in the United States has heard of. The answer was pretty unsurprising: there are a fair number of Israelis living here, and Mashina is arguably the greatest band in that country’s history. So in spite of the extortionary asking price, the acoustically worst (or, for brevity’s sake, worst) venue in New York was packed with ex-pats willing to throw down an entire 192.5 shekels for a chance to see their country’s answer to the Rolling Stones–or rather, to the Pixies, the Madness and the handful of other acts Mashina has borrowed from over the years.

In some ways, Mashina–who have put out eight albums since their ska-heavy Mashina 1 went the Israeli equivalent of double-platinum back in the early 80s–is a throwback to a time when borrowing could pass for originality on the Israeli scene. A record store clerk once explained to me that Israel is usually six months behind Europe and a year behind the United States as far as musical trends are concerned, an observation that’s true as a general rule, and less so when applied to the handful of Israeli artists who have been able to stake out some crossover appeal.

But it’s also a good summary of Israeli music during the period when Mashina was first taking off, although the past couple of years have proven that Israel is not a year behind the rest of the musical world: Idan Raichel’s up-tempo, oud-driven rearrangements of traditional Ethiopian beats landed him a high-profile gig at the Apollo and a moderately successful U.S. tour. Meanwhile, the dangerously catchy Nu Med–a masterful reggae/middle eastern/klezmir acid trip orchestrated by Brooklyn-based duo Balkan Beatbox–was one of Robert Christgau’s 20 best albums of 2007 (granted, Christgau’s pretty full of shit most of the time, but he’s on to something here).

(Other Israeli artists have played shows in the U.S. without garnering the critical attention they probably deserve. The best of these is probably the recently broken-up Shotei Hanevua, whose stoner-friendly genre-bending helped distance Israeli pop music from its reliably Western influences. While the members of Shotei clearly spent a lot of time listening to Arabic pop, Chadag Nachash has a style that fans of mid-70s funk will probably recognize. The international success of their “Bumpersticker Song” unfortunately distracted from the group’s other bankable qualities–especially their curt, even subversive lyrics, and their devastating live show.)

So recent Israeli music is an ethnomusicologist’s wet dream. But Mashina is pedestrian by comparison. Their music is good even if it isn’t particularly interesting, and bands like that only occasionally match the spontaneity and surprise of those whose music is interesting rather than good. But Mashina’s almost two-hour set left little room for doubt: Reichel may be worthy of a doctoral dissertation, but Mashina fucking rocks.

Mashina is fronted by Yuval Banai, whose brother Ehud is popularly referred to as Israel’s Bob Dylan. For the first half of Mashina’s set, Banai sounded like his country’s Bon Jovi. Their 2005 comeback Futurologist Romance has an anthemic quality thankfully missing from their scrappier, more danceable early 90s output, although, like any veteran rock act, Mashina is more than capable of playing way over their heads. “Falling Snow” was mediocre even for a tear-jerking power ballad, but it helps when everyone in the audience knows every word to almost every one of your songs. It also helps when you have a strong catalogue to fall back on: even if Mashina’s recent work has sounds too much like a victory lap, it provided an opportunity to let the excitement build. Purists have commented on how digital music has killed the subtle art of pacing or sequencing (at least for recorded music), but Mashina wouldn’t disappoint them.

The band stopped playing stuff off of Romance around halfway through the set, when they played the lead track off of grungy 1992 release Monsters of Glory. It was around this point that concert started feeling less like a typical, Bowery Presents-style fleecing and more like a (very expensive) Todd P show: most of the audience members were Israelis old enough to remember a time when Mashina was selling out stadiums, so the prospect of seeing them in New York–or of seeing them at all, after a seven-year hiatus–was probably enough to make some of their displaced fan base fork over that truly insane amount of money. With the crowd jumping in unison and Webster Hall’s floor threatening to collapse under the pressure (that place literally shakes, and not just because the bass monitor is always too fucking high), I wondered at the stupidity of not making the concert–and indeed, all concerts–free and outdoors. It would have been pretty sick.

Not that it wasn’t pretty sick anyway. Mashina closed their set with their first and most successful single: 1984’s “Night Train to Cairo”, a Madness ripoff that would be just a little too blatant if it weren’t for an almost-lethal synth line. If they hadn’t stopped playing it last Tuesday night, I’d be skanking to it still.

To be fair, Mashina would eventually prove itself to be ahead of a couple of major musical trends. There are few 80s (or, for that matter, 90s) bands who could make Caribbean-inflected ska sound as not-fake as Mashina did, and their brief, late 80s reggae phase saw them taking a heavier approach to a quintessential chill genre. But their greatest accomplishment must have felt like a betrayal when it dropped in 1992: Monsters was one punishing guitar track after another; a tribute to grunge godfathers like the Pixies, and an anticipation of the derivative, guitar-heavy dance acts that now clutter so many indie scenes. The band closed an almost half hour-long encore with Monsters‘ “No Other Place,” a song that puts the Foals of the world to shame. It’s also one that would probably be considered a classic if it had been in English.

The crowd might have tore Webster Hall to pieces if Mashina had kept going for another 10 minutes, but unfortunately they did not. The band left the stage with the venue still standing–and left me with a pretty ferocious post-concert high. 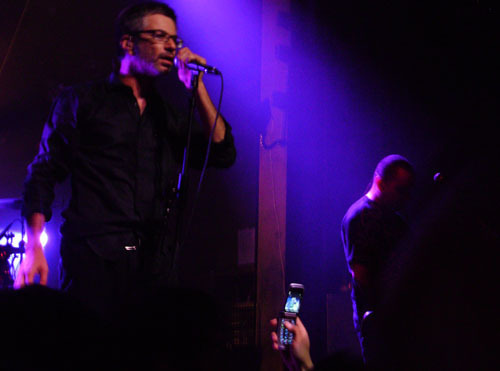 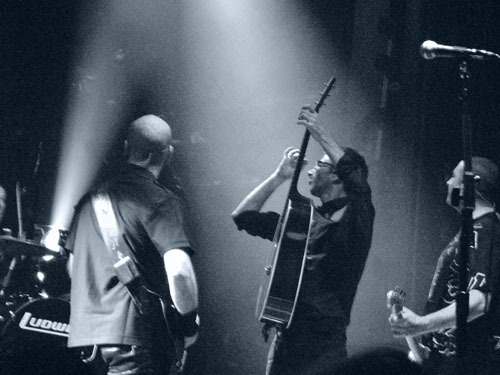 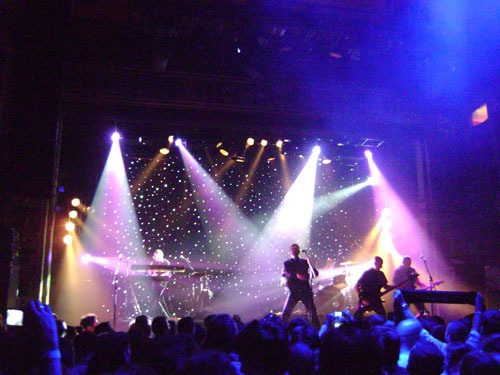