New York needs venues like Goodbye Blue Monday. From the street, with Bushwick traffic streaking by and the Broadway J-line rumbling overhead, the place doesn’t look that remarkable, but stepping inside is a little like wandering out of the desert into the cave of wonders. The main space seems to be a living room, library, and curiosity shop, with records and books spilling and cascading down from shelves around displays of antique cameras and long dead virtual pets. A couple internet-equipped computers and a bar run along one wall (serving up cans of cheap Ballantine and PBR out of a fridge along with an assorted coffee-shop fare), while the rest of the space is given over to a comfortable assortment of benches, easy chairs, and crowded end-tables. Above the stage at the back, monolithic painted words intone “FLOTSAM JETSAM”, which seems as good an explanation for the place as any. Below, a hall winds away past poster-size blow-ups of risque pulp covers of another era to the back “garden,” which seems to be a workshop for the construction of eerie automatons and composited furniture.

Most important for our purposes (though there is already plenty to recommend the place) is the free live music every night of the week, typically four acts starting at 9:00 and finishing up a little after midnight. But this is no open-mic night. What’s remarkable about Goodbye Blue Monday is the esoteric nature of the acts they pull in. Despite the shows all being free, they don’t seem to have any problem filling their slots well. I’ve been three times and have yet to see any acoustic guitar-weilding singer-song-writer types, or even any cookie cutter rock bands. In the past, I’ve encountered some pretty decent DIY electronica and dub, as well as an eerie string-and-noise quintet. Last Friday, I was there for an electro-pop group called Nosebleed Island, down from Vermont and with recommendations from a friend up there, but I fortunately arrived early enough to catch two of the other bands, neither of which I’d recognized on the bill, but both of which I turned out to know of indirectly. The evening as a whole made me realize that all those other unrecognized names of upcoming GBM bookings are just potential promise.

Noveller (pronounced like “novella” with an -er) turned out to be the solo noise project of Sarah Lipstate whose other band, the ambient ensemble Sands, I’d run across (and been intrigued by) in other billings in the past. Solo, Lipstate creates rich fields of static and noise via two EBows on a double-necked guitar resting flat on a keyboard stand. This is run through a variety of effects boxes allowing her to reshape her raw sounds at will, tweaking, splintering, and smoothing out again. Not your average coffee house act.

Next up came Paranoid Critical Condition, an impressive no-wave two-piece consisting of drummer Libby Fab and guitarist Reg Bloor, perhaps better known for her work with guitar-symphony composer Glenn Branca (to whom she is married). Seething with treble, technically formidable, and crashingly dissonant, Paranoid Critical Condition was another of those acts that create far more of a racket than would seem possible for a two piece. Their instrumentals weren’t exactly easy to listen to, but the precise writing and execution stood out. A friend favorably likened their rapid riffing to surf rock, a comparison I can understand, if not entirely endorse.

The pairing of Paranoid and Noveller may not have been entirely random: Noveller’s Lipstate played in a recent Branca piece for 100 guitars. But if those two acts made sense together, headliners Nosebleed Island (who I’d been tipped off to only a week before) were something of an about-face: cute, catchy electro-pop about pizza, vampires, and beating up Nazis. There was a shambling noisiness to their drum and key loops and shouted choruses that traced a thin line back to the others, but this was designed more to be fun and amusing (and it was) than technically rigorous. Apparently, back in Vermont they play live with a cardboard robot and Dracula, but sadly these two key members were absent Friday: the robot was run over while shooting a recent video, and it was apparently way past Dracula’s bedtime. 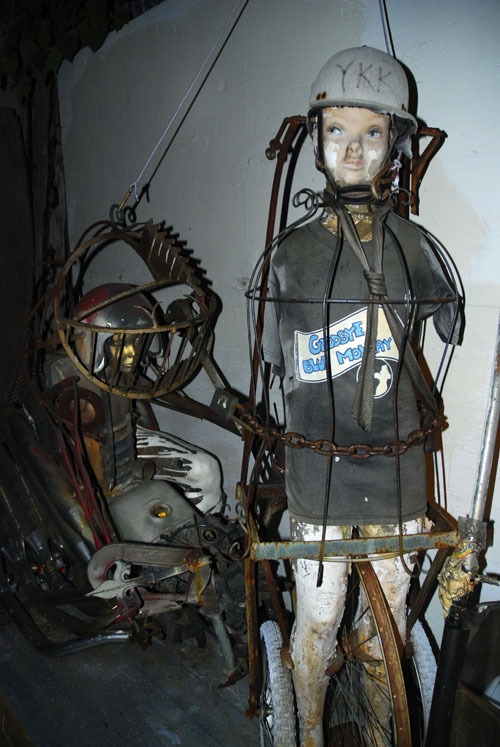 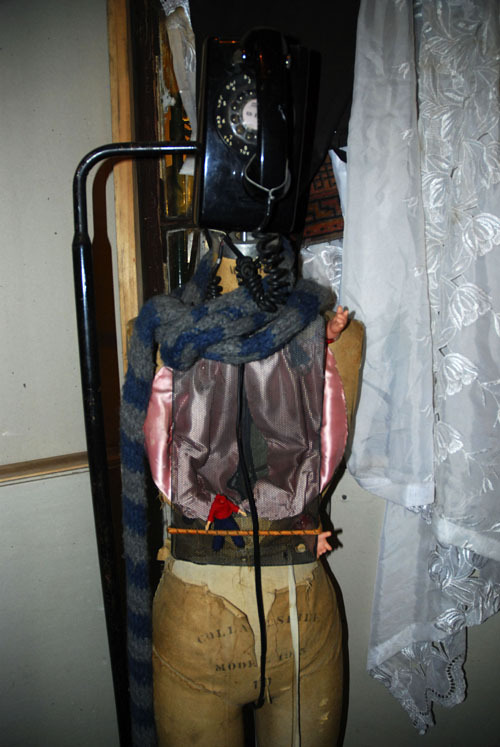 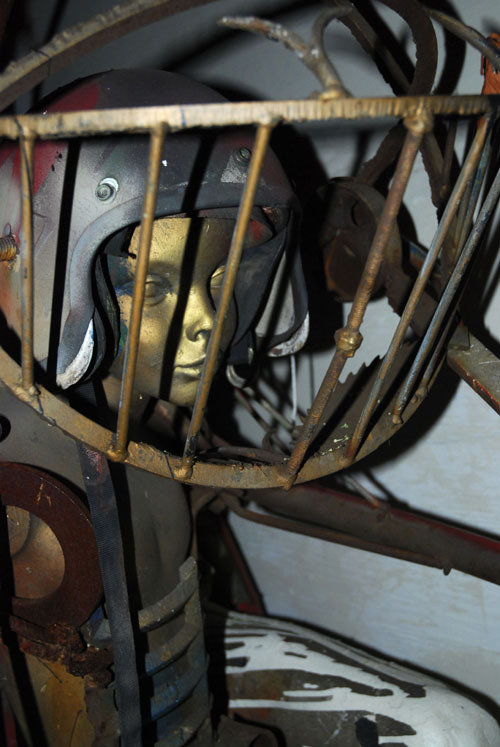 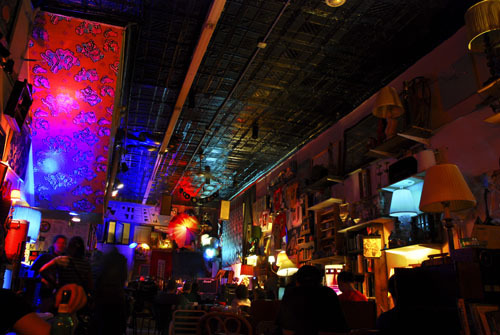 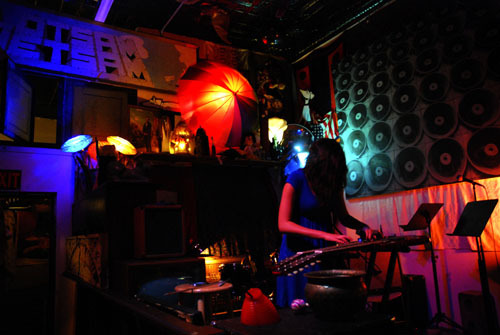 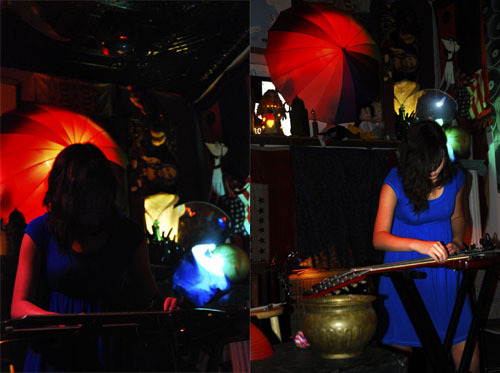 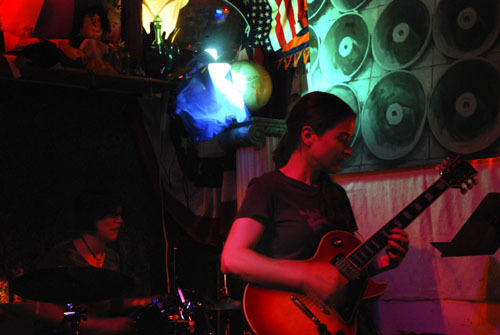 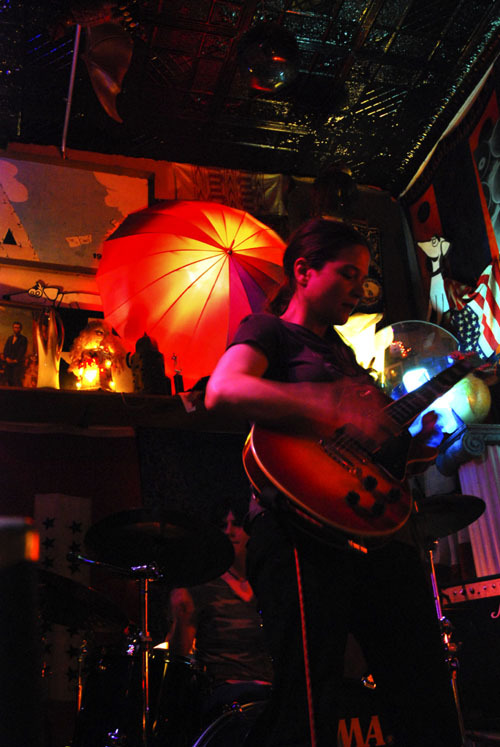 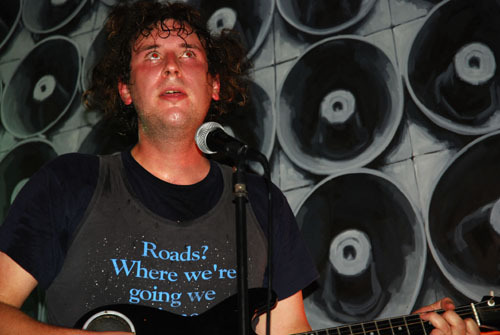 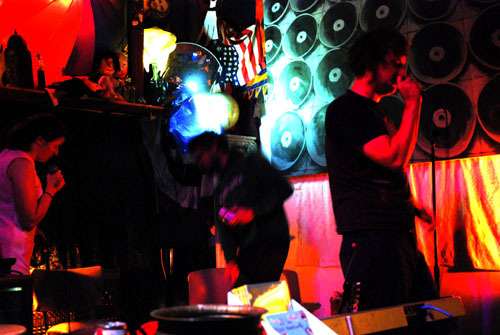 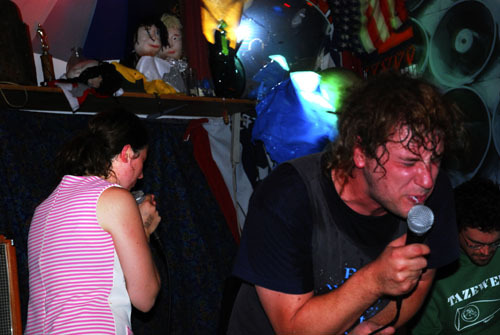 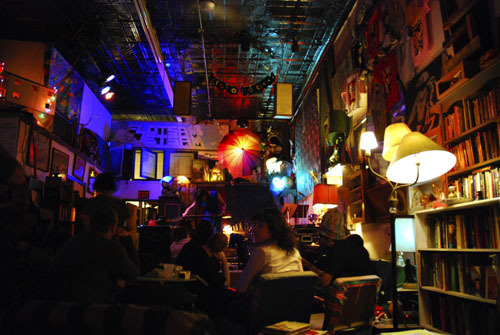