As if Live Nation weren't bad enough, here's a concert series sponsored by Starbucks. This is horrifying in such a mundane way that it becomes that much more horrifying. It's almost too mundane to make fun of, and you know they've won when it's not even worth making fun of. With one fell swoop Starbucks has jizzed all over 1) music, 2) art (the event was held at the Museum of Fine Arts Houston), and 3) my ears. And that stuff don't come out easy, let me tell you.

Corporate handjobs aside, fighting the power sometimes just involves staying in too many nights in a row. And there's a point past which Adult Swim just isn't funny anymore (I know, I'm scared too). So I decided to make the most of my stay in Houston and let Starbucks treat my brain like a precious espresso bean, grinded, mashed and overdripped into a bland, bitter cup of disillusionment.

First off, seriously, if you're going to throw free iced coffee at me instead of booze you really ought to stay open past midnight. That's just mean. Now I'm all wired and have nothing to do besides complain about your goddamn free coffee.

Also you might as well have thrown in some free wi-fi too, that way I could have live-blogged every trip to the urinal.

This young lady decided to bathe her toesies in the fountain.

And this hefty lad wasn't about to let a few feet of water stand between him and the cash bar. He returned ten minutes later with some Alabama slammers.

We all know a museum venue is a magnet for all sorts of douchebags toting their favorite clichés, so I was fully prepared for the many straw fedoras, suit vests, enormous sunglasses and Asian girlfriends in the crowd. Not pictured: girls in high heels and t-shirts that came down to their underwear.

The man on the right's coolness has caused him to sneeze.

First up are Houston's own Mathletes — eight guys and gals on stage making some sort of sillypop with songs about furry animals, unicorns, suicide and other things you see on Nick Jr. Or acid. And even though there were eight people on stage, including two drummers, not everyone was pulling their weight. We're looking at you, tambourine man.

The bright blue violin was a nice centerpiece for this fruit salad of a band. Seriously, who put peyote in these guys' Fun Dip?

Words can't describe how hot it is. Outdoors, Texas, confined space, sweaty people. It's not even June and it's so humid outside that leaving the house is like jumping into a bathtub filled with stale malt liquor thats been left out on the patio for three days.

Mid-band were some dj sets that all somehow involved mashing rap with nostalgic 90s pop. I don't care how well you mix it with “Don't call me No Mo',” “Wonderwall” is still just a bad song.

This guy was literally playing to his iTunes visualization. That's right, know your audience.

And this guy encapsulates all that is Houston.

Let's just call Voxtrot a boy band. I mean they're all boys, they sing about sensitive things. Girls like them. Also gay men. Also girls' and gay men's boyfriends.

One lead guitarist down, the band sweated through a few new songs.

I don't think the event planners realized how creepy it is to have people play in front of projected versions of modern art. Today's feature: Texas artist John Alexander, known for his monkeys, blurry flowers and skeletons.

The band finished, the ghetto announcers get back on, ask us all to give it up for “Vocktrox”. And reiterate that they are indeed “in the house”.

This man really wants an encore.

He got his encore. Here's to you, screaming weasel-face man. Without you we might have gotten home early.

At midnight sharp the bitchy museum guards start prodding us out into the Houston night. They even close the bathrooms on us, the bastards.

On the way home I decide to pee on a Masonic Temple, because that's just the kind of night I've had. 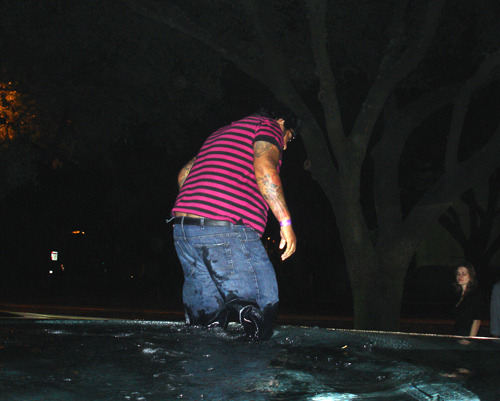 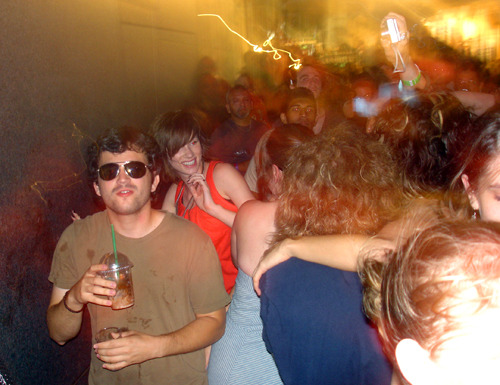 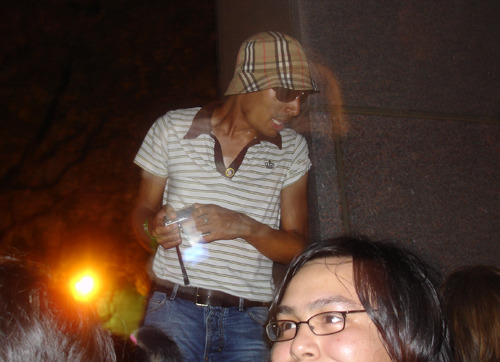 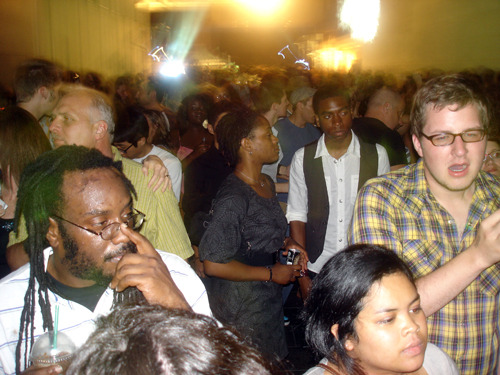 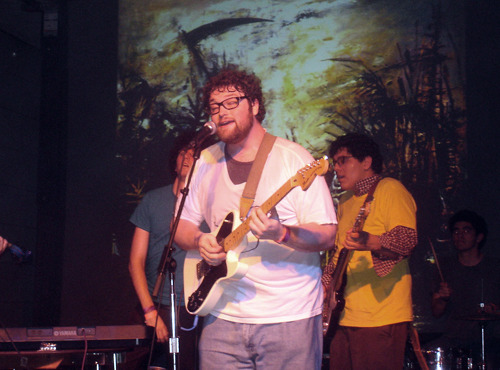 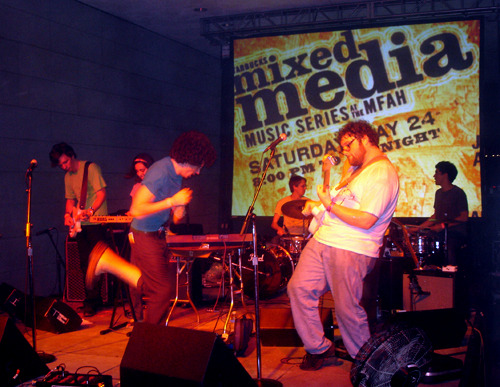 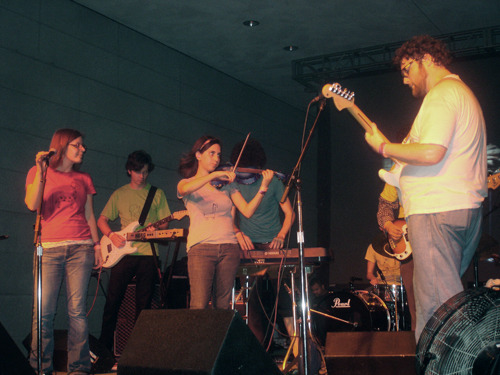 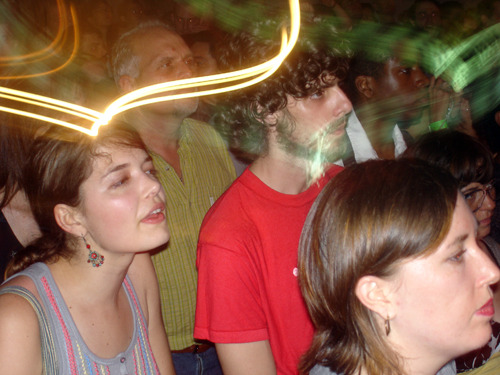 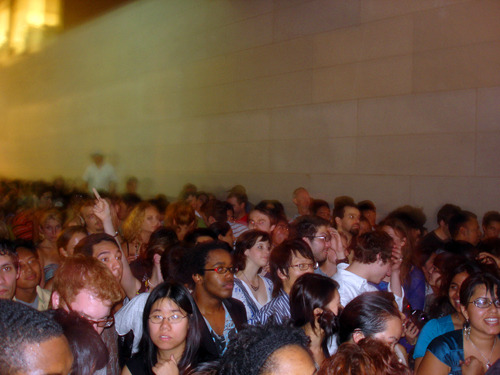 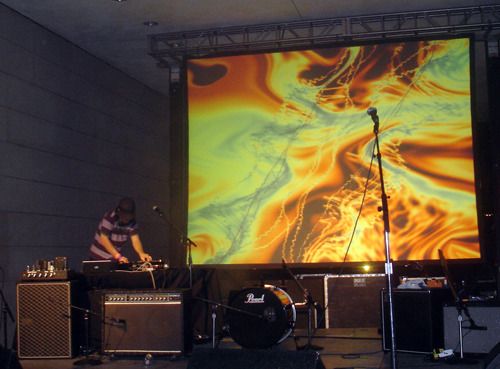 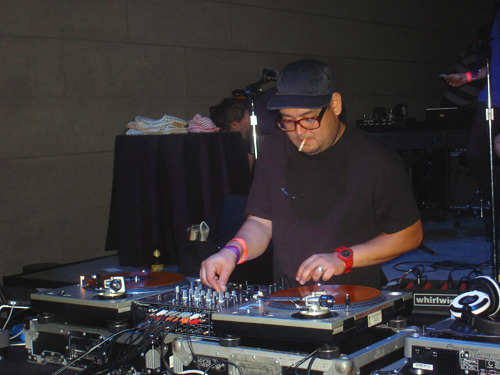 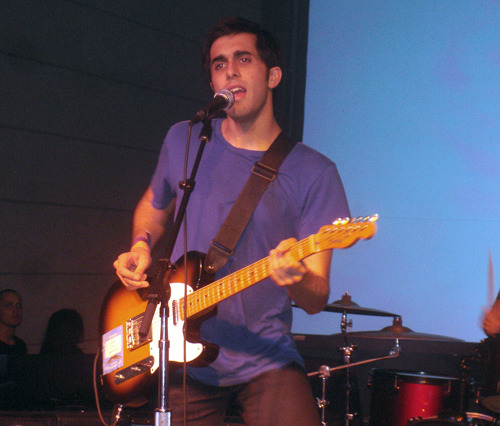 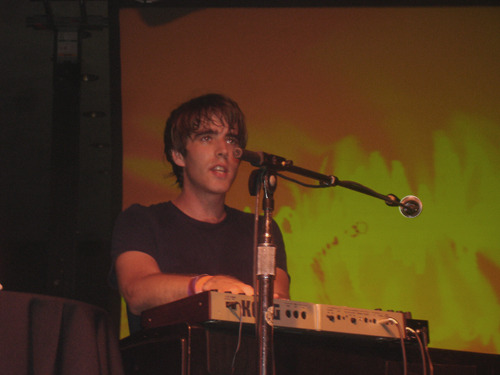 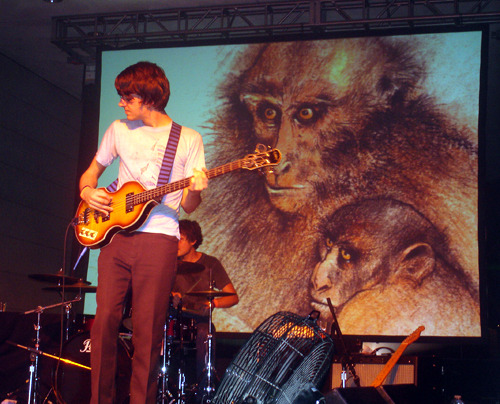 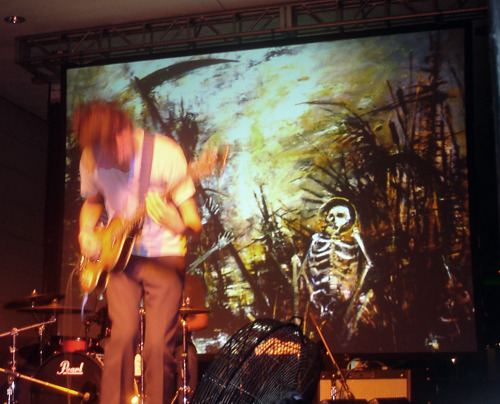 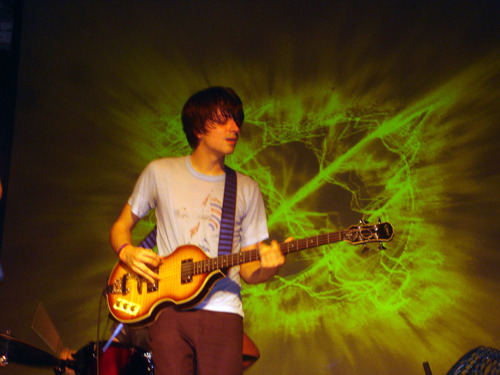 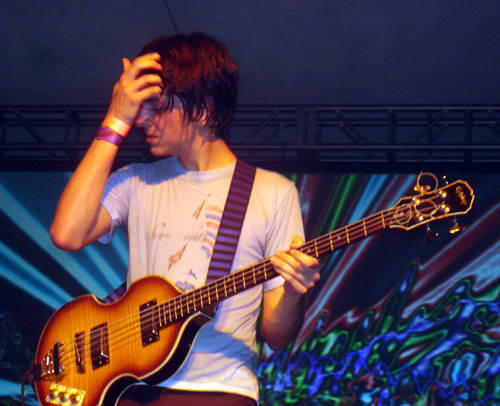 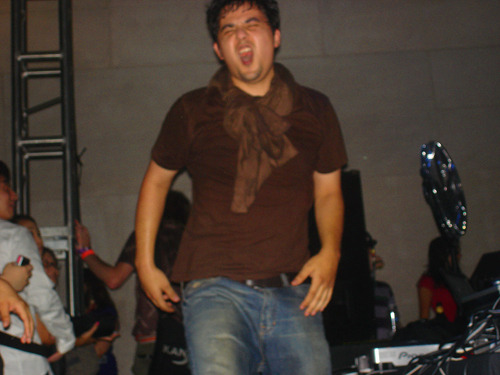 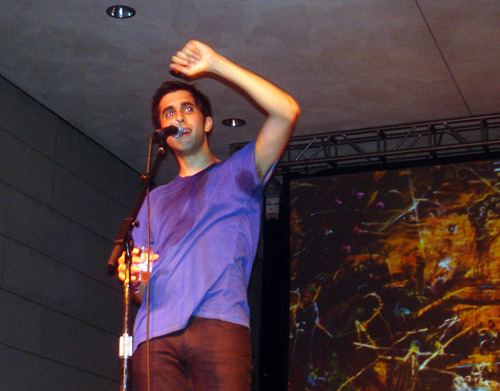 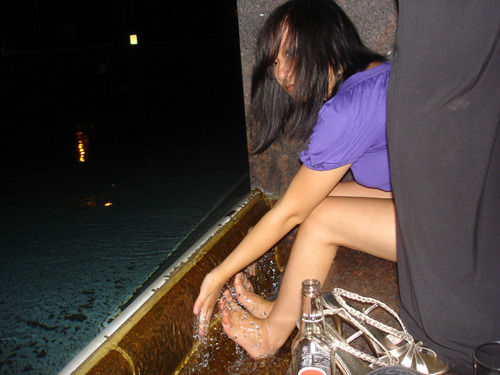