The Vaselines at Maxwells, Hoboken

Like pre-reunion Mission of Burma, Suicide, the Modern Lovers and a handful of other acts, the Vaselines are a band whose impact is vastly disproportionate to its surprisingly small oeuvre. They managed two EPs and a single full-length in four years of existence, and they’re best known in America for the 1992 Sub Pop compilation that carries their “complete history” — all 53 minutes and 19 tracks of it. But most bands should be ready to kill for a 53 minutes this strong: between 1986 and 1990, Francis McKee and Eugene Kelly were the kind of songwriters that could fuck around with an AM country gospel standard and produce one of the most penetrating works of satire in the indie cannon (“Jesus Wants Me For A Sunbeam”, for the curious). They could write a song called “Monsterpussy” that wasn’t even remotely ridiculous. And they mastered the indie-pop song in a way it hasn’t been mastered since, largely through approaching it with a downright unerring sense of formal restraint. Just give “Son of Gun” a careful listen: it’s catchy but not annoying; fuzzy, but not to the point that it bleeds into punk or shoe gaze. It sounds straightforward, but it has an alluringly nebulous quality stemming from the fact that the music and lyrics are moving in such comfortably opposite directions, the latter towards nursery rhyme-like innocence and the former towards who the hell knows what. It’s cute because it’s deeply strange, and deeply strange because it’s cute — little wonder that the famously sardonic Kurt Cobain named his kid after McKee.

Almost every tolerable indie-pop act has mastered this cuteness-strangeness balance. While most of the non-Impose reading world probably wants to give Colin Meloy or Ezra Koenig a great big hug, I’m more impressed with the weirdly inexplicable treatment of Mike Piazza’s sexuality in that one Belle and Sebastian song, or the uncomfortably humorous depiction of domestic violence in the Magnetic Fields’ “Yeah, Oh Yeah” — or, while we’re at it, those references to oral sex in the Vaselines’ “Molly’s Lips” (so what if the band claims that song isn’t about oral sex. We all know — or rather, hope — that this is bullshit).

The Vaselines just about perfected this brand of indie pop weird — and to make things even weirder, their first U.S. gig was less than a week ago. Last Wednesday and Thursday night, they played sold-out shows at Maxwell’s and Southpaw respectively before heading to Seattle for Sub Pop’s 20th anniversary celebration.

The Maxwell’s show proved that this lack of a U.S. presence hasn’t resulted in a lack of appreciation stateside (or maybe it proves that the grave hasn’t quite dimmed Kurt Cobain’s trendsetter status. Anyway…) Of course, McKee and Kelly’s Sub Pop years are long gone: they’re both in their mid-40s, and haven’t been in music full-time since the early 90s. So their recorded material evinces a cool sort of distance: Francis’ voice brings to mind an unnaturally winsome (and, incidentally, androgynous) 10-year-old child, while Eugene’s carries a certain menacing edge. But the years have rendered them shockingly normal in person, less like rockstars than people semi-randomly plucked out of middle-age and inserted into a rockstar-for-a-night-type role. It was one they played well even without the edgy androgyny, and they competently ripped into one jangling two-minute pop riff after another

They fit nearly all their songs into a little over an hour, although the crowd didn’t seem too fazed by the set’s shortness: after all, Maxwells is one of those clubs where the artists actually have to fight the crowd to get onstage, giving an added sense of intimacy to a group of fans who looked like they’d had most of the Complete History memorized for the past decade and a half. It was such a giddy atmosphere that even the maddening “You Think You’re a Man” wasn’t as ear-gougingly infuriating as usual — if there’s one place where this embarrassing stain on the Vaselines’ record is justifiable, surely it’s at Maxwell’s for a one-off reunion show.

I imagine McKee and Kelly have pretty normal lives back in their native Scotland. Not so surprising — that one guy from Chromeo has a day job as a French professor, for shitsake (and, as a side note, I think the drummer from Q and Not U still works behind the counter at Video Americaine in Takoma Park, MD. Umm, tell him I say hi?). To indie-pop fans of a cynical bent, this could have been a depressing reminder that the whole being-Kurt’s-favorite-band thing can only last for so long, and that it can end with a couple hundred people gathered in a back room in Hoboken. On the plus side, if making great music 20 years ago should entitle you to anything, surely a chilled-out show in front of a handful of ravenously grateful fans should be it. It was a low-key victory lap to be sure — but definitely one well-earned. 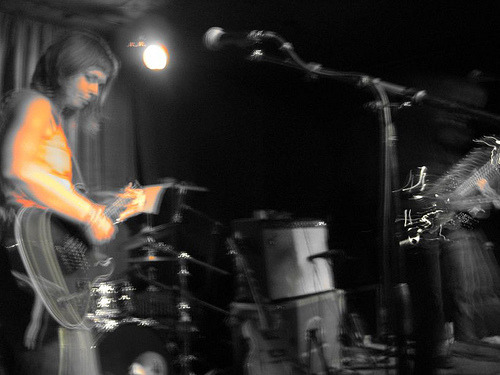