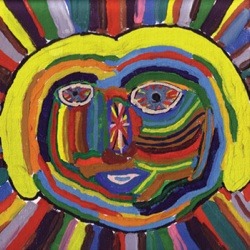 The first time I saw Panther, in the winter of 2002, in a decrepit Portland, Oregon warehouse space, the scene was about as Pacific Northwest as possible: there was a bake sale going on, the Shins had just played, and the crowd was practically playing telephone with the phrase, “I think I just saw Steve Malkmus.” It was boring.

Suddenly, into the fray of indie stances and haircuts came Charlie Salas-Humara, then the aesthetic survivor of a train wreck of a local prog-rock band, The Planet The. He set up his janky boombox, and, instants after hitting “play,” disintegrated into a blitzkrieg of dance moves so slithery and incomprehensible that it would do him a disservice to try and recount them now. I was blown away, not just because of dude's desperately audacious stage presence, especially given the context, but because of the music, too, which had this insanely damaged soul sound, with Salas-Humara's brutal falsetto criminally undercut by a rushed procession of Casio beats.

After six years, the frenetically self-contained dance experiments have gotten much more sophisticated — Salas-Humara’s awkwardly long session of “floor dancing,” premiered on the DVD accompanying last year’s brilliantly fucked up Secret Lawns, is definitely worth YouTube-ing for the profundity of its spastic stoner genius.

The Panther sound is a little more fleshed out, too, these days — he's got the virtuosic Joe Kelly, formerly of 31 Knots, on drums now — but the manic spirit of that first warehouse freak-out more than remains. Their first record as a duo, 14kt God, holds fast to the paranoid funk intensity of earlier Panther essays, but fills in the empty spaces with vocal loops, undertones of basement cello, and drumming that would sound straight-up Caribbean if it wasn't for all the delay [Ed. Or maybe because of them]. The addition of Joe Kelly is inspired: Panther sounds less what-the-fuck now that he has space to focus on his vocals and the occasionally glitch-churchy synth line.

Like Secret Lawns, 14kt God has some definite standout tracks; the breezy grooves and delay-drenched, repetitive vocal lines of the record's opener, “Puerto Rican Jukebox,” are so perfect as to be practically self-evident, while “These Two Trees,” an alleged “basement crammed party jam” boasts seemingly unending layers of bongo drum fills and stuttering “oohs” and “ahhs” that come off like a Robo-tripping James Brown. Even the album's few duds abound with so much howling, feverish energy that it's practically impossible to pass judgment on them based on the hopelessly irrelevant standards of traditional, not to mention nontraditional, rhythm and meter.