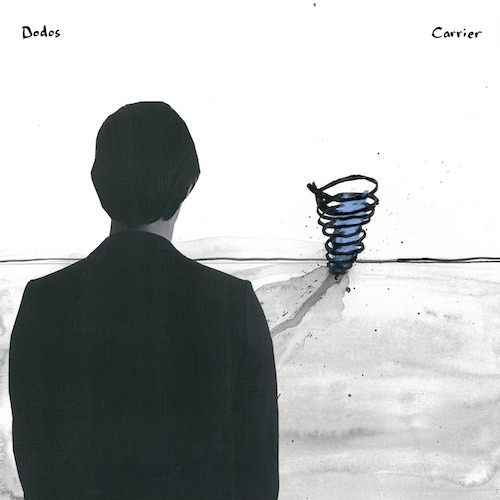 “You will forget but I will remember” intones Dodos mastermind, Meric Long on the second song of fifth LP, Carrier. This admission reflects both his positioning as a fraught and prolific artist, the band's five albums in seven years representing some of the best output in independent rock, as well as his desire to keep the story and keep the story correctly. Modern music can be a land without history, a release cycle, promotion, interviews, tour, and then silence; the artist ceases to exist. There are, after all, so many other records and bands, relentlessly linear with no sense of teleology. Some of this anxious modernity has always flickered at the edges of the Dodos' work. Their hallmark has always been a certain tightness, an essentizing of discourse, punk rock on acoustic guitars. On Carrier, the band finds themselves in sharp, consistent form, warm acoustic arrangements giving way to raucous and explosive ones. Song titles barely longer than a single word, Meric Long chases down something durable and lasting on Carrier, artistic pith, even while he and his listeners both know these memories mean more to the artist than it does to his audience.

Some of the dualism of Carrier is captured in the alternately downcast and soaring moments of “Family”. Long blithely reflects aphorisms like, “success is failure,” along side visual simile like, “caught between desert and storm,” leaving the listener to spin between the poles of his lyrics and his arrangement. The song's bridge finds two guitars chasing one another to the ceiling, Long's vocals returning like Andrew Kenny on a bender. Perhaps the collection's strongest song, “Confidence” finds similar twin impulses. “My body's still, my mind is empty,” sings Long in a lyric that can't possibly be true for an artist with such an intense internal narrative, or for an arrangement that builds and shudders around the lyric, “don't slow down”, finally spilling over into a million angular pieces. Even album opener, “Transformer” asks, “What does a song hold,” a weird intersection of art and meta-narrative. Long finds beauty in these liminal places, the interstitial geographies, the places that are no places.

At his most reflective and elegiac on songs like, “Holidays”, the band trusts the listener with the oblique and compartmental, a few spare parts and the loosest architecture of an idea. Long muses, “Holidays, you can't recover”, a line that could mean almost anything to anyone, even if while the listener must be certain of its cold import to the singer. On “Death” Long is more direct, singing, “Death, what could be worse if I had something to complain about? / If I took your place, would it hurt? Something to complain about”. The passing of the band's guitarist Chris Reimer cannot be far from the margins. Sounding a bit like the wide-screen pop of Local Natives on “Destroyer”, the Dodos race a few guitar riffs, nominally upbeat, against a wave of lyrical destruction. Long sings, “you know you are dark and twisted / cold and gifted”, a temptation in the duality of darkness and creative generation.

Finally confronting the ineffable on album closer, “The Ocean”, maybe spatiality that cannot be captured by the band's direct and immediate song structures and titles, Long sings, “It's only the ocean, subject to others, subject to no one.” The song's final movement is explosive and urgent, a strum pattern that communicates nothing but movement, and a string arrangement adding color and depth. Long's search for something lasting arrives at the song's final, repeated question, “Why won't you be where I want you to be?”. For all its concision, Long and the Dodos save themselves and their listener this final bit of uncertainty. These are memories held and lost, an attempt to find something firm in the ephemeral. Still uncertain of the answer to his opening question, “What does a song hold?”, Long's initial suggestion, “Was it love?”, is the closest he allows himself to the Truth. Caught between the fleeting and the firm, the band offers no clear determinism, a blurry watercolor design between the forgotten and the forever.