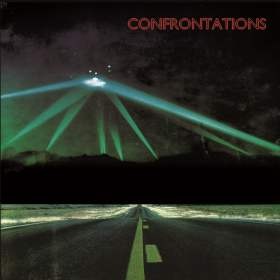 Four full-lengths into the lifespan of synth composer Umberto (Matt Hill), and the general consensus seems to be that it’s impossible to write or talk about his music without name-checking Dario Argento, John Carpenter or Giorgio Moroder. This may seem reductive, or like an opportunity to engage in nerdier-than-though pissing contests, but after spending just a few minutes with Confrontations, Hill’s latest album, you get the feeling he wouldn’t want it any other way. This is music from a hermetic night world where the only important musicians are the ones who lent their talents to analogue horror movies about psychosexual repression and sorority houses.

But unlike the James Ferraros and Gary Wars of the world, Hill refuses to crack a smile at the expense of his source material. Really, there’s nothing on Confrontations that could be confused for irony. Nor is there any way that the album will make it into your casual stoned listening rotation, alongside droning, meditative Not Not Fun artists like Sand Circles and Rangers. Confrontations is too propulsive and chilly to be zoned-out to. There’s also an occasional Derrick May meets Alan Parsons Project vibe, but that’s so weird it almost has to be incidental. So, excluding people who have been awaiting that dream collaboration, what listeners might find pleasure in Confrontations? If you’ve spent an embarrassing number of hours on your hands and knees crate digging for VHS obscurities in the back of thrift stores, step to the front of the line. You’ll probably enjoy treating Confrontations like a sonic game of Choose Your Own Adventure.

Opener “Night Fantasy” at least partially delivers on the promise telegraphed by its title, lulling us into something seductively neon-slicked and not too far removed from an icier, leaner take on Ford & Lopatin’s decadent, Reaganomics-fuelled fantasias. Wind is in your hair, Ray-Bans have been slipped over your eyes, and you’re not the least bit worried that you’re night driving in sunglasses. But before the track is even half over, you start getting some clues that the girl in your passenger seat isn’t quite whom (or what) you think she is. The high synth notes are a bit too piercing, the disembodied coos more spectral than sexy.

As “Night Fantasy” morphs into “Initial Revelation,” those murmurs have solidified into an impenetrable wall and the rhythmic insistence becomes unbearably tense before it’s finally consumed by atmosphere. For the rest of the album, the mind’s eye starts welling up with the kinds of visions you don’t want to witness while home alone and high. All the sudden you’re pretty sure the TV can see into our soul, the radio is broadcasting your thoughts. And that bat-shit, paranoid old man that was raving at you on the street? Turns out he wasn’t so crazy.

So yeah, Confrontations can be really evocative. But it gains some dignity from Hill’s unwillingness to go for cheap thrills or laughs. A faux ‘80s soundtrack isn’t exactly the first place you’d expect emotional resonance, but something like steely fatalism and the dread of preordained disaster lurk between all those shrieking synth arpeggios. To continue the Carpenter thread, this isn’t the camp fun of Big Trouble in Little China or They Live (the one with WWF star Roddy Piper and magic sunglasses). The mood here is probably closest to that of Prince of Darkness, the somber 1987 occult/alien invasion mash-up that came sandwiched between those two commercial hits. Like that semi-forgotten movie, Confrontations is probably destined to be overshadowed by more vibrant, accessible works that tread similar territory. But, as is the case with plenty of underappreciated slashers and sci-fi oddities, the album’s cerebral terrors are as compelling as its surface ones.