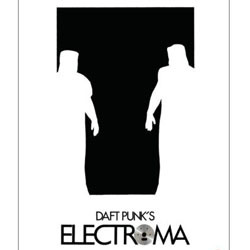 I am a Daft Punk fan. I enjoy the music and the unique visuals which accompany it in video form. Electrorama, as I envisioned based purely on name alone, would be a concert piece involving lots of neon and laser lights in an area known as “Electrorama!” Oh, how I underestimated the artistry Daft Punk now wields. Not a video collection or anime full-length or even an illustrious concert movie, no, Daft Punk has released a narrative film.

In its basic conceptual form, there are two robotic beings searching for human souls through towns and on highways in an 87 Ferrari 412, and in the desert by foot. Unlike a concert movie where viewers tend to skip chapters in search of interesting soundbites or captivating visuals, one gazes at Electrorama, as its meditative narrative carries on fluidly towards its destructive finale. Lensed by half of Daft Punk, the camera work is hypnotically seductive. The static and tracking shots are constructed in a manner reminiscent of Stanley Kubrick prime while arid desert scenes also harken to Mad Max. The use of actual, pliable 35mm film gives added depth.

The film's intensity is carefully achieved through camera work and song. But don't expect a Daft Punk soundtrack; Electrorama doesn't contain any Daft Punk music. Instead, it's peppered with evocative picks from Todd Rundgren, Curtis Mayfield and a host of others, including Chopin. In fact, the only notions that this project is Daft Punk related are in the credits (by human name) and on the protagonist robots' leather jackets.

Ah, the power of song; it can convey so many emotions especially when dialogue is absent. I'm not talking about a moment or two, but the entirety of Electrorama. No dialogue, just silence except for soundtrack and ambient space-void blowing. Not even any sound effects, save for one explosion. Truly a minimalist expression, but one which was deeply researched by Daft Punk, who poured over hundreds of books and magazines to gain the aesthetic they longed for, no matter how unconventional. One half is quoted as saying “The film is experimental and inaccessible; however, it's a movie that does not require your brain to function.” For a film with no words, how appropriate that it can be summed up in so few. A simple and beautiful endeavor, but stay aware or you'll miss the secret in the sand.