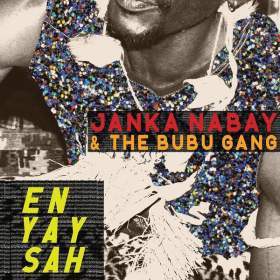 In Sierra Leone, Janka Nabay repopularized Bubu music, a genre steeped in the country’s ancient mythology. Reportedly, a young boy sacrificed his own life to acquire the music from witches and bring it to the people. Following his flight from the country in the midst of a civil war, his expatriate life found him employed by East Coast fast food restaurants. Then, his command of the genre was noted by Brooklyn’s True Panther Sounds imprint who arranged Nabay’s first domestic release in 2010. For En Yay Sah, Nabay has assembled The Bubu Gang, an assortment of Brooklyn musicians including members of Chairlift and Skeletons.

If the thought of young indie rock musicians from New York appropriating world music makes readers weary, don’t despair, Nabay arranged The Bubu Gang with great care. In fact, it’s partly The Bubu Gang’s extremely proficient grasp of the genre’s traditional performance that makes En Yay Sah such a compelling listen. Bubu music is not simple. The rhythms are completely counter intuitive to Western rock musicians. The skittish, hyperactive percussion is intended for multiple performers, but The Bubu Gang’s drummer plays each part simultaneously on an electric drum set. Such is the instrumental nature of En Yay Sah: firm command of a difficult, traditional style but performed with modern timbre and instruments. Experimentation following traditional mastery is often the most rewarding; and certainly in the case of The Bubu Gang. Without a solid foundation, the unconventional additions of dawdling psychedelic guitars and synthesizer wouldn’t be so complementary to the music.

Despite the busy, insistent nature of Bubu rhythms and the group’s virtuosic performances, it’s incredible how seamlessly all of the conflicting parts blend. “Somebody” employs briskly pulsating bass and equally aggressive synth leads above the requisite piercing rhythms, but all with such controlled tones that the track seems deceivingly sparse. On the title track, the preset percussive tones flaunt their artificiality but even in this most obviously electronic track, the inherent humanity of Bubu music is still evident thanks to the skilled playing.

While the instrumentalists are adept and the production is pristine, what elevates En Yay Sah beyond the sum of its parts is Nabay’s vocals and the female vocals he interacts with in the traditional call-and-response Bubu style. His singing voice is relatively atonal, but the erratic delivery of lines in English, his native Krio and unintelligible scat carry a transcendent emotive impact. This otherworldly vocal quality is especially apparent on “Feba,” the jovial and swift interplay between Nabay and a female vocalist is instantly relatable, as if containing all conversational nuances between men and women in an impossibly short space.

The mythological origin of Bubu music, Nabay’s own arch from Sierra Leonean stardom to fry cook and his rigorous reinvention in Brooklyn contains a rich history that listeners will certainly feel compelled to investigate. Yet, even without the context, En Yay Sah is an album fraught with contradictions that manage to endear, a modern instrumental approach that never abandons Bubu’s traditional humanity and Nabay’s vocals that majestically encapsulate the human experience.