Frying On This Rock – White Hills 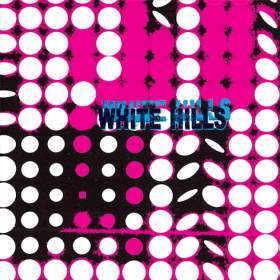 Holy cats, Batman! This NYC band is one prolific musical factory (and one of the most dis-associative bands on Thrill Jockey Records). I counted at least nineteen releases dating back to 2003 on a couple discographies I found on-line.

Julian Cope released their 2005 album, They’ve Got Blood Like We’ve Got Blood, but prior to the well-received 2011 album, H-p1, they were still largely shrouded in mystery, with no coverage at all above ground. The whole vast musical solar system here revolves primarily around guitarist Dave W., bassist Ego Sensation and drummer Lee Hinshaw. This is a five-song EP that Thrill Jockey is calling “deep space rock,” adding that this is White Hills “most energized recording to date.” I can’t confirm that, having not heard everything, but I can say what I have heard comes on like a wheezing, sub-sonic, day-glo, nearly out of control, psychedelic locomotive.

Sure, Hawkwind remains a common denominator when people refer to this band, but don’t let that fool you, it’s much more than that. What they do is a cocktail consisting of numerous unstable, neo-psychedelic ingredients. Much of it is a sprawling, groovy, post-stoner thrill ride that heaves and lunges back and forth, with push-pull dynamics stretching heaviness into tension. The guitars and bass constantly melt into one gooey mass and then reconstitute themselves. It’s not Blue Cheer, or Monster Magnet, or The Bevis Frond, or Electric Wizard, or Mastodon, but some of those same synapses are all buzzing simultaneously.

These five tracks all burn, and completists will rightfully be all over this anyway, but the fifteen-minute closer, “I Write a Thousand Letters (Pulp on Bone)” is the real reason to drop the coinage on this one if you’re a newcomer. Start here and work backward.