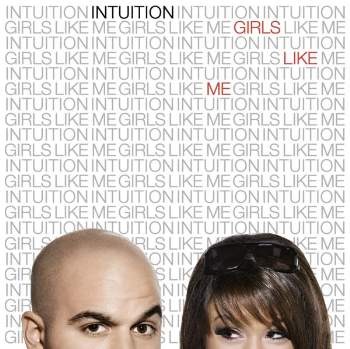 L.A. rapper Intuition titled his
sophomore record Girls Like Me, affirming
a transformation that kills off the griot in his debut. Stories About Nothing introduced us to a competent rhymewriter
with room to grow. Girls Like Me is a celebration of honing
that potential and using those skills for evil by rapping about
netting scenester floosies in fishnets. It's a record that could
alienate those simple folk down since the debut, but will create a
swarm of swollen vaginas at his shows and dudes who feel like he's
speaking their bro language finally – “I'ma chug another lager
until this strut becomes stagger… be an asshole simply for the love
of laughter.”

The transformation is mildly comical.
In three years he's gone from album art with indigenous forlorn faces
and bleeding heart lyrics of interacting with bums with a back story
on Stories About Nothing, to future ex-wives, Al Bundy
postures and smart ass bed sheet braggadocio. The killer crossover
makes “Say Hell To Goodbye” the proper opening track as he firmly
states, “say goodbye to what you thought you knew.”

Whether he's aware or not, Girls
Like Me is a record for his peers and lost youth fan base,
bypassing the sociology and the exploration of archetypes present on
Stories, Intuition states on “Homegirl,” “it makes my
friends all chuckle when I'm talking to a young lass flashing a ball
buckle” and “I know I got a hit if you giggle at it too long”
is his main aim with his fall-back girl on “Lonely.” He's out to
please at the sacrifice of his established identity as an
Alaskan-born transplant living in Culver City. Girls Like Me
is Intuition embracing the West Coast materialism and phony on phony
crime that makes LA a dreaded place of narcissism and addiction.
Incidentally, he's the genuine article for his brazen honesty. He'll
be the first to tell you there's not a lie on this record.

The transformation is no surprise.
Stories About Nothing rested lotus style on the end of the
sidewalk of the underground hip hop movement as a national
phenomenon, i.e. suburban celebrated. The terrain no longer gives two
fucks for camo-cargo shorts, Rawkus t-shirts, MC battles and abstract
poetics. Righteous rhymes and proclamations of “real hip hop”
were buried in a grave of dookie chains, tight jeans, neon-everything
and shaved dreadlocks, making Intuition's record arrival ripe for the
next movement – even if that movement is just as misguided as its
predecessors.

Three songs on this record get down to
the brass tacks of Intuition's style and motivations; “Ed McMahon,”
“Don't Try” and “All I Got,” the rest are his Al Bundy
posture to entertain us from a safe distance. The first song justifies the
cache of sexual conquest songs. The chorus to “Ed McMahon”
relates the importance of keeping things light-hearted as a formula
for holding on to the vibes and such before these tough times
started. It's a bitch of a time to be young, off your parent's
insurance, heavily in debt and on a check-to-check lifestyle. You
spring for cable only to have the television plug its prime viewing
hours with fresh litters of beautiful L.A. kids, birthrights to a
multitude of fortunes, in the choicest of clubs, popping bottles and
puking on lavish garments in limousines. How do we react? By opting
out of a savings account and putting that loot towards the imitation
of swank status – tough times, comrades.

Intuition's slight alternative is to
embrace the broke willie style, playing the game to his accommodations, remaining honest in squalor and laughing all the way
to the bedposts that these dames eat up his chicanery. He relates
these tales four times over (“Lonely,” “Homegirl,” “Al
Bundy,” “Future Ex-Wife”). Equilibrium's is the devil's
advocate of Intuition's debaucherous path. EQ has taken note of the
adjustments and expanded his craft into live instrumentation,
wrapping his sound around the MC's words, instead of vice versa. It
might have been the drawback in Stores About Nothing,
Intuition had to function within a constructed sound, while Girls
Like Me, feels like hours of post-production to ensure we know
who's in charge.

Intuition wants you to believe the
soft hot spot between your girls thighs is his comfort zone, but
traces of the underground rapper that wrote “Head in the Clouds”
and “Forget Today” linger in minor doses, keeping his history out
of the footnotes. The Intuition rapping on “Don't Try” and “All
I Got,” which features fellow Cali rappers Ex-I and Nocando, is the secret/true identity. “Don't Try” is a sleepy
bare bones acoustic jammy challenging Intuition to toy with a
sing-songy delivery. He pumps the brakes on the braggart diatribe to
offer insight into his defeatist tendencies like, “I've been trying
to run with the torch / but I just torched a cig, so I'm stuck on the
porch.” On “All I Got” Intuition professes a bullshit-free
laundry list of his abstract possessions, such as the ex-girl clinger, a dead-end job, an empty wallet and a little apartment, but boils
down to “ain't got a damn thing to really call my own.”

It's unfair to fault Intuition for the
direction of Girls Like Me. The market for the righteous, down
to earth emcee is a fool's bazaar. This is what we demand – at
least he's more of a mid-20s Bukowski than the censor-less belligerence of Tucker Max. The risks taken pay
off. “Don't Try” is hip hop blues without the treading in kitschy
waters. The presence of R&B hooks on “Future Ex-Wife” and
“Hold Your Breath” provide a brief mending of a painful divorce
between the two genres. The lewdness is balanced with self-awareness
(“you love me, like I love me and that's something that's rare”)
that keeps it light-hearted, instead of boisterous, unfiltered chauvinism. Intuition put it best on “Don't Try” stating, “I'm
deep enough to act shallow / smart enough to play dumb.”