History Will Absolve Me – billy woods 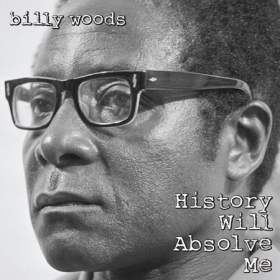 Before all rap was cloud rap and people of all sorts started chanting “swag” on the regular, things weren't so peaceful in ye olde Kingdom of Hip Hop. Based on listening alone, it'd be pretty fair to assume that a guy like billy woods– a Cannibal Ox-associated veteran who spells his name in all lower-case– would prefer to be caught dead, if at all, with some of the more marketable new school. It's a stance in line with the old rap underground that brought up Rawkus and Def Jux, but when we last heard woods' raps as one-half of The Super Chron Flight Brothers, his character, however proud, was always playful. On History Will Absolve Me, his latest record and first solo effort in 8 years, woods has shifted gears from sharing clever observations in the forum to crafting an intense memoir where vitriol flies freely and emotions, however abstracted, run high.

Wandering through the grey of urban decay, flitting in between fantasy and reality amongst the pawn shops, empty subway cars, and invisible enemies, woods reigns supreme in poeticizing sobering situations. It leaves him occupying a bitter palate in an entertaining streak, free to call bullshit without reprise a la “Duck Hunt” and its cool dismantling of A&R room rappers: “can't talk about pussy like you're trying' to convince me / go ahead dawg, see how close you and your niggas be / self-described pretty G's with fly bitches on they tweets / but me? I'll Delonte West ya old earth and still keep it discreet / dude your whole style is wash, rinse repeat.” But the rap-game as life-game metaphor– easily one of the more tired parts of anything resembling “conscious” rap– pops up pretty sparingly; more often than not, despite his history, woods comes off estranged from hip hop at large.

His patient, rhythmically obscured delivery, especially when mingling with the angular, anti-trillwave ice of the production (The Cold Vein would be a good touchstone, but trade in some of the synthetic for the soulful), has the feeling of a ghost visiting: even if it doesn't seem real, the language is too important to be ignored, and still too intricate to be immediately absorbed. Woods even assumes the level of prophet on the chilling latter-half cut “Human Resources,” where the sins of greed and waste (especially of human lives) finally receive punishment (in the wasting of more human lives): “a thousand israeli gun butts will reign on King Solomon's walls / curved blade cuts, the lamb thrashes.”

Despite all this heavy-hearted talk, History Will Absolve Me, is far from a lecture– good luck not mobbing out and maybe throwing a chair or some shit during the one-two of my favorite tracks, “Crocodile Tears” and “The Man Who Would Be King.” If you were once a purist, think more albums should sound like Funcrusher Plus, or could just use a real MC with zero investment in trend-baiting anything, then this album will be something of a gift from God to you. While this particular year's more extreme adventures in concept rap– like Lil' Ugly Mane or Serengeti as Kenny Dennis— are too clever to not take seriously, I haven't been so compelled to tense up, flex, raise my fist, and nod in on some hard hip hop, pretty firmly rooted in reality, in a long while (maybe not even since Monkey Barz). And while watching all the young bloods wait around to get DM'd by FlyLo or Jesus or Interscope, I'll still be picking up the lines I missed the first time around on History Will Absolve Me.