Hymns For A Dark Horse – The Bowerbirds 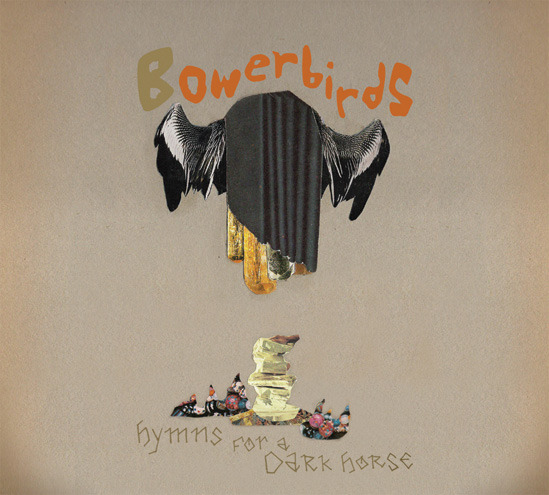 Bowerbirds, the egg-laying animal, are forest birds indigenous to Australia and New Guinea; the male birds attract their mates by constructing elaborate bowers out of twigs, flowers, shells, berries, and small pieces of discarded plastic or glass – as long as they’re colorful and shiny. The Bowerbirds, the band, aren’t quite as interesting as their namesakes. They’re just three people from North Carolina who supposedly live in an Airstream trailer in the woods. It’s not as fascinating as a bird-built cottage of leaves and Coca-Cola caps, but still rather unusual.

Like any other self-respecting independent folk band who name themselves after obscure Australian birds and live in a trailer in the woods, The Bowerbirds have written an entire album around Mother Earth. Their aptly titled debut album, Hymns For A Dark Horse, feature ten songs that essentially revolve around animals, mountains, streams, and the climate. It is slightly more interesting than it sounds.

As much as Hymns is a homage toward the earth, it is also, like many modern independent records, an examination of darker human conditions. These are not songs about holding hands in the woods and making pretty things for your girlfriend. Take for example the opening line of “Dark Horse”: “On the shore of a lake, in the great upstate of New York, came the call of a loon”, which sounds perfectly sweet and innocent until the line “he sang, ‘You, my friend, are alone, alone.’” Mean spirited singing birds aside, the album also makes mention of blood and carnage, of war and hatred. On the standout track “In Our Talons”, vocalist Phil Moore gleefully sings, “You’re in our talons now, and we’re never letting go.” Nature has never been quite so intimidating. In many instances, the theme of nature is invoked to counter or contrast the actions of man. “The Marbled Godwit” starts with “great white puffs of lumbering buffalo blanket the fishbowl sky” and ends with “death to the civilized (stolen through violent means). Death when all want masquerades as need.”

I have focused primarily on the words of The Bowerbirds because there is little to be said for the music. Unlike their namesake, The Bowerbirds do not construct elaborate, colorful pieces. Their music is sparse, bare and stripped down; it is often just a few soft plucks on an acoustic guitar against some tapping that I think is meant to be percussion until an accordion or violin joins in halfway through the song for a few wistful bars. Phil Moore sings capably, but not exactly with a lot of flair or charisma. He is often joined by his bandmates during the chorus, in a sort of strange and dark sing-along, providing a little variety to the too-mellow sound. “In Our Talons” provides an addictive refrain, but the rest of the album ambles along quietly.

The album mostly rests on the strength of the lyrical content, without which Hymns would seem very dull. As it stands, Hymns is an intriguing collection of words set to less than remarkable music. Unfortunately, it takes more than pretty words to produce an extraordinary album.