I Wake Up Screaming – Kid Creole & The Coconuts 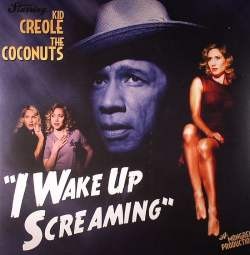 There is something reassuring about the fact that August Darnell is still making music. Best known as the zoot suit-sporting Kid Creole, he carved his own musical path in the 1980s along with The Coconuts, resulting in a unique and recognizable blend of what Darnell would call “Mongrel Music.” The daring hybrid of disco aesthetics, big band bravado, and tropical island influences all resurface on his latest album, I Wake Up Screaming. It's a return to form for Kid Creole, assisted in part by the steady co-production of Darnell's own sons and mix engineering from Brennan Green. Along with songs co-written by Andy Butler of Hercules & Love Affair, The Tropical Gangster's vision is seen through a contemporary dance music lens while remaining true to the band's sound.

The opening track “Stony And Cory” plays a bit of catch-up with Darnell's history, taking the listener back to the days of Dr. Buzzard's Original Savannah Band. Even the rhythm guitar licks and the occasional “zoom, zoom, zoom” from the background vocals is a direct nod to that musical period. Paying tribute to band members Stony Browder, Jr. and Cory Daye, it is the perfect introduction to Darnell's world. “I Wake Up Screaming (In The Topics)” is a reminder that Kid Creole never shied away from naughty yet playful lyrics. As his main squeeze plays hard to get in the Virgin Islands, he asks, “Why you don't wanna boom boom boom / Why you treat me like a loony toon?” Darnell was always one to use lyrics to his advantage, playing upon one theme while the musical backing suggested an entirely different mood. “I Do Believe” is a straightforward disco number with spacey synth lines that compliment the Kid's musings on flying horses, purple dinosaurs, and an assortment of other far-fetched images. The slow, slinky bounce of “We're Rockin' Out Tonight” could be the underlying theme as a couple hits the town, but the lyrics reveal that things are about to hit the skids. “You go your way, I go my way, maybe someday we'll meet halfway.”
Kid Creole sounds right at home on “Verily Verily Verily,” seductively crooning his way over a calypso backbeat and exquisitely arranged instrumentation. “Tudor Jones” slows things down for an acoustic guitar-led ballad fit for last call sing-a-longs at bars across and eyebrows may raise at the Victorian motif that runs through “Long Live The King.” As it concludes with a military march, blistering guitar solo, and overly effected singing, it proves itself to be the sore thumb selection of the album. Nevertheless, Darnell deserves his props for mixing it up and he has no problems telling you so in “Blow Me Up,” with boasts as punchy as the trumpet solo that follows his lead.
As Kid Creole, August Darnell continues to create music that sounds like nothing else around him. At the same time, he is able to pick up influences from the undercurrents of today's disco permutations and incorporate them into his compositions. I Wake Up Screaming is not a repackaging of his earlier work, but a present-day statement that stands as a welcome addition to the Kid’s discography. At a time when some artists can be a little too serious about the creative process, this is exactly the type of unbridled and unashamed fun that's sorely needed.
PrevPreviousMystery Ocean – Hermit Thrushes
NextIndestructible Machine – Lydia LovelessNext