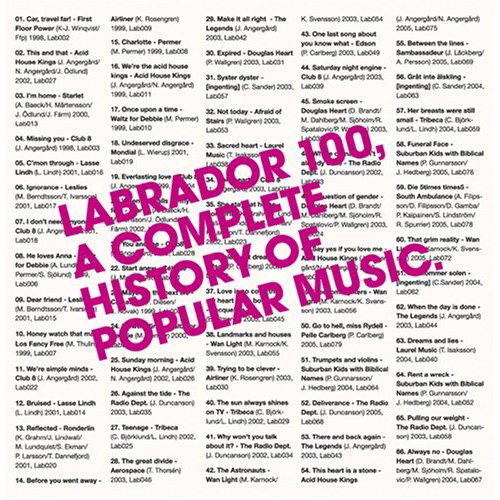 For ten years Swedish indie label Labrador has been cranking out tiny pop gems. To celebrate this landmark anniversary, the people who brought us Acid House Kings and The Radio Dept. deliver Labrador 100: A Complete History of Popular Music, the label’s 100th release. Loaded with 100 songs by 34 different bands, most of which hit under the three-minute mark, this four-disc set, eye-opening and easy to digest, serves as Swedish Indie Pop 101.

This “label of love” encompasses true DIY sensibilities, and when Labrador uses the term “popular,” they aren’t talking about ABBA. The definition of popular that best suits this compilation is “of the people.” The label’s strict veto policy speaks to this philosophy. If a Labrador employee doesn’t like a particular recording, it won’t be released. Co-owner and Acid House Kings member Niklas Angergard says simply, “per definition, every release makes the sun break through the clouds.” Lucky for Stockholm, where only six hours of daylight brighten frosty winter days.

This set would serve anyone unfamiliar with indie pop well, as it shows the genre’s depth and breadth. Sofia Coppola used some tracks by The Radio Dept. in Marie-Antoinette and fans of Lost in Translation will surely fall for their dark 80s static. On “When Sun Falls on My Feet,” Starlet lead singer Jonas Farm croons, “Have you ever sung along to the lines of ‘Hand in Glove’ as if they were your own?” and by his baby-Morrissey lilt, I’d wager that he has. Waltz for Debbie’s Eurodisco efforts are annoyingly infectious, Celeste stands out with a unique Tropicalia-infused track, Tribeca’s catchy industrial-lite should have made it big, and The Legends build a wall of sound with big blocks of ice. [ingenting] combines Swedish lyrics (the only to be found here) with bright guitars and loads of summery percussion to devastating effect, while Suburban Kids with Biblical Names playfully channel The Magnetic Fields with their acerbically humorous anthems. And let’s not forget Sambassadeur’s loping delicacy, Pelle Carberg’s witty songwriting, Acid House Kings’ audio watercolors, and Douglas Heart’s dreamy brooding.

Wan Light, Hanky & Panky, and Airliner’s flaccid and forgettable endeavors might be a little too twee for the casual indie pop listener, but their combined eight songs are a mere drop in the bucket. The remaining 92 tracks should be more than enough to satiate a curious music fan, and as the traditional Swedish proverb goes: “Enough is as good as a feast.”