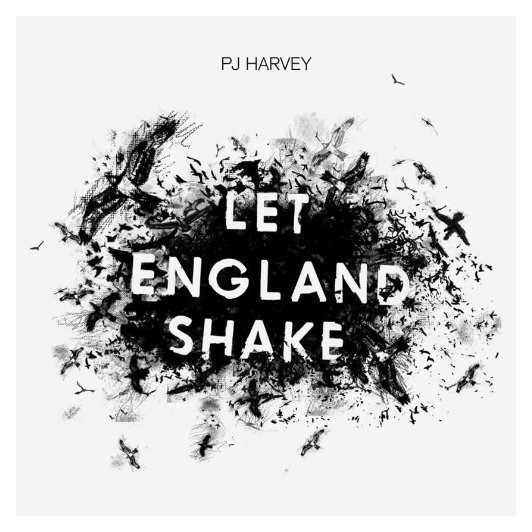 In some ways, Let England Shake, PJ Harvey’s eighth studio album to date, is her most ambitious work to come over her nearly 20 year career. At the same time, it’s questionably the most straight-forward and pop oriented recording that she’s ever released. Leaving behind the piano, and introspective songwriting, Let England Shake is largely a conceptual album that deals with pervading English political issues like war and nationalism. The other notable transition is Harvey’s singing style. Dropping her trademark bleeding vocals, Harvey sings in a less aggravated, displaced manner, her tone observational rather than firsthand.

Stylistically, the album is diverse. The title track is a rambling and sprawling number that leans heavily on its upbeat and playful nature via strings and a twisted xylophone progression that signals an overshadowing darkness to come.

Forceful, pounding bass drums, simplistically effective electric guitar and Harvey’s lush harmonies dive “The Last Living Rose”. Her lyrics unsurprisingly evoke a great deal of imagery as well, a sort of forte of hers. Sometimes, her visions get brutal, like in “The Words That Maketh Murder”, where Harvey sounds unfazed as she embodies some militant figure: “I seen and done things I want to forget, I’ve seen soldiers fall like lumps of meat.”

An airy, reverb doused autoharp encompasses a great deal of the instrumentation, further signifying the evident space between the songwriter and her stories. “On Battleship Hill”–one of the more tragically beautiful numbers on the record–plays out like the haunting retelling of embittered memories. Percussion fades in and out, as John Parish and Harvey trade off vocal recollections: “On battleship hills caved in trenches, a hateful feeling still lingers.”

Let England Shake requires a large deal of emotional investment and deals with political matters and the repercussions of war, which is nothing new, because as we are all quite certain, these are roads we’ve been down on numerous occasions over the past ten years. But as an outsider looking in, much like Harvey, these sort of disheartening memories are feelings that tend to not disappear, at least not as quickly as maybe we would hope.