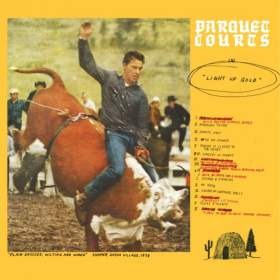 Texas transplants and Fergus & Geronimo members Austin Brown and Andrew Savage have brought the Big Apple something better than the straw stuck to the bottom of their boots. As Parquet Courts, Brown and Savage’s quick-shot punk rock, shaken with something smoother, combines one-liner, perfectly timed humor with thoughtfully poetic wordplay and an unromantic but sincere straightforwardness. The band’s first full-length album, Light Up Gold, is rough, inspiring, and fucking hilarious – packed with tunes that are exuberant and strangely, provocatively insightful.

The lyrics, penned by Savage (whose younger brother, Max, is Parquet Court’s drummer), soundtrack his first winter in New York, which was apparently a time of intense, self-conscious stress, feeling weird about doing nothing and worried that future plans might never unfold. Thank god the guy knows how to giggle, too. While Savage navigates heavy ideas and ridiculous bits with natural ease, part of Parquet Courts’ charm is their ability to make their points quick, never over-indulging in a particularly golden nugget. Most songs hover around a minute, and Savage’s words can never fall too deep into introspection, even in bottom-dwelling tunes like “Borrowed Time,” since they’re kept at a party-hard pace by Brown, Max, and bassist Sean Yeaton.

But it shouldn’t surprise that in-between the tough stuff, some softness emerges (and vice versa). “No Ideas” starts as a sweetly sung love song to someone’s Renee, but segues into the awesome chorus: “I went to a shrink/And he found my brain/And I had no ideas is what he found.” With just a few lines and as many minutes, Parquet Courts touch on how much we struggle to say something, to be unique and memorable, whether it’s to give some red-lipped so-and-so what she needs or accomplish some goal outside the sheets, but sometimes (so often) we just don’t got the magic. And in those moments, you gotta think, as much as we try, we might just be the wax, not the fabulous yellow roman candles we long to be. What do we do with that?

Who fucking knows, PC might say. Light Up Gold isn’t the answer, but it may be, as “Light Up Gold II” sings in party harmony, “the color of something I was looking for.” Where the actual thing is remains unknown.

But while we figure out the finer details, let’s answers the bigger questions about munchies. Light Up Gold’s longest number, “Stoned and Starving” speaks to us on a level we can all understand, and it’s easily the album’s best instrumental moment. Burned through with a muted, fuzzy, go-forth force, “Stoned and Starving” drives our narrator past magazine racks, Swedish Fish, and cigarette labels as he is, uh, stoned and starving. “S&S” may be about a slacker’s insatiable wanderlust, but it’s got the tambourine beat and below-the-belt heat to turn it into any night’s after-sunset soundtrack, whether high or low.

Bigger than the revitalized proto-punk idea that the oppressive everything is worth leaving behind for equally mind-numbing but truer nothing, Light Up Gold never quite says, “Fuck it all.” Instead, Parquet Courts articulate all those things going wrong in an honest self-diagnosis that doesn’t cut out the possibility of working toward something better. And they do it with an absolutely contagious laugh and burnin’, rippin’ rhythms. Yee-haw, mutherfuckers!