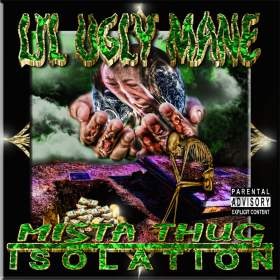 If you have dutch guts rotting in the center console of your car and still routinely rock 8Ball & MJG tapes through blown out speakers (take heed, all y'all who carpooled with me in high school) then just go ahead and download this album. Though it was released as a name-your-price download with little fanfare — Ugly Mane himself proclaiming “fuck it, its saturday. im bout to just drop this tape.” — Mista Thug Isolation is far more than datpiff fodder. Lil' Ugly Mane has fully developed into his ideal Memphis hardcore caricature and exudes pure evil without resorting to shallow shock tactics. But even in the presence of the hellish, the attention to detail — whether in his commitment to country-fried pronunciations or producer Shawn Kemp's devilishly dissonant flips — makes it evident that this project wasn't born from a love of violence or horror, but rather a love of hip hop.

You can't love hip hop without unabashedly loving the villain or anti-hero archetype, and the main appeal to Lil' Ugly Mane is his character. It's as if Three 6 Mafia, in their occult heyday, had gathered together for their first attempt at necromancy and it unexpectedly worked. The catch is, a deal with the devil gets made, and Ugly Mane is quite the devil, dispensing crack rocks, his one partner-in-crime (his dick), and gun shots to all aspiring custies, hoes, and haters with no remorse. He's like a great, (very) adult cartoon character effortlessly passing through different episodes of the thug life: dodging shots in the g-funk banger “Serious Shit”, getting' lifted via a stellar Bun B impression in “Radiation (Lung Pollution)”, and driving around looking for action that he won't call back in “Slick Rick.” Nothing new for rap really, but the dynamic is flipped and what was once a tale of humanity forced to confront the inhumane has become just the opposite: a spirit from the other side rampages through our realm.

Homeboy doesn't drink sizzurp, he drinks beetle juice! He doesn't have a bag of guts like “the innards of a dutch / just a bag fulla guts.” The Mane thrives in those awkward intersections of humor and terror that have left lesser groups lazy with excuses or just thoroughly, boringly one-dimensional. The oddball wordplay of lines like “Bitch I'm morose and lugubrious / I'ma let the uzi spit, turn his face into gooey shit” or “she say what's your number I said 1-800 hell no / bitch, get, goin' 'fore I drop you with my elbow (ad lib: BEEEE-ITCH!)” are pitch perfect for the occasion and, at their best, recall Kool Keith's Dr. Octagon side project if it was more punchlines and less poetry. Friend and frequent collaborator Shawn Kemp, who takes care of all the production work here, never loses pace with his madman compadre, keeping a consistent palette of dirty south 808 bounce and too-trill snare fills that switches styles readily. Dude rocks everything from chipmunk voices with backup orchestras a la old school Dipset (“Wishmaster”) to broken, atonal opera records (“Cup Fulla Beetle Juice”) and turns it into an unearthed, lo-fi artifact from a secret (ad nauseum in advance) Memphis mixtape.

Ironically, Isolation's commitment to the playbook ends up being its only great sin as well. As likable as Ugly Mane is and with all the heaters that Kemp throws in, there's still the familiar traps that plagued Mystic Stylez and other similar offenders: unnecessary length, nigh-indistinguishable choruses, and sheer redundancy. Tracks like the obligatory ladies jam “Mona Lisa Overdrive” or the relatively innocuous “No Slack in My Mack” feel forced even when Mane does go pretty hard (especially on the latter). But it seriously boggles my mind that even with an hour-plus length that “Send Em 2 Tha Essence” was made a bonus track while a few others even made the cut at all. Some of Ugly Mane's best elements, like weirdo found sounds of the squeaky door in “Lookin' 4 Tha Suckin'” or the heavy breathing in Criminal Hypnosis jam “End Ya Whole Shit,” pop up pretty sparingly and end up seeming like under-utilized calling cards here.

Even still, there's a lot for this mane, his partner in production, and the criminally under-rated CMLK crew to be proud of with Mista Thug Isolation. They've repped their home city of Richmond, VA and their philosophically raw brand of style-hopping rap hard with the first great non-instrumental tape of their clique. The guy who plays Lil' Ugly Mane has a notable history in the city operating a now-defunct DIY artspace/venue, making waves with his old solo harsh noise project, and scoring laughs with a now-removed viral video (sorry, keeping his identity a mystery will be more fun for everyone). Though that backstory used to seem like a novelty, his conceptual art background makes odd sense given how he illuminates his character here, and motivates Shawn Kemp — perhaps the most MC-craving beatsmith of the CMLKers — to make the hardest beats he ever has in tribute to something they all love: good ol' hardcore hip hop.