Music From Regions Beyond – Tiger Army 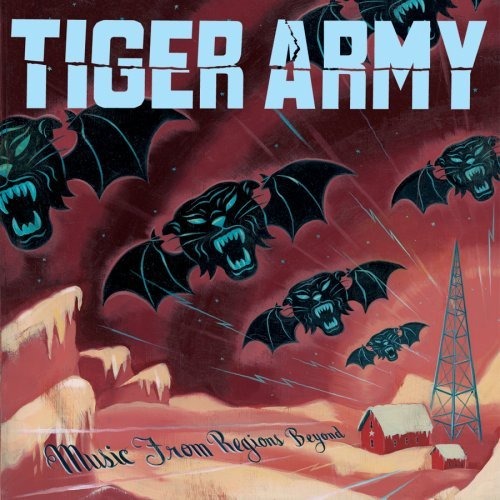 Fans and critics are touting Music From Regions Beyond as a breakout album for the So-Cal psychobilly trio, Tiger Army. Tiger Army already has a rabid fan following and with a stint in this summer’s Warped Tour and the single “Forever Fades Away” getting heavy air-play on modern rock stations, the band would almost have to try at this point to keep from breaking out into the mainstream. Luckily for Tiger Army, Music From Regions Beyond lives up to the anticipation and hype.

Joining the line-up with mainstay songwriter/singer/guitarist Nick 13 is Jeff Roffredo on bass and James Meza on drums, and while Nick 13 is undoubtedly the leader and creator here, it’s the newcomers—the good old rockabilly rhythm section—that really drive the album. From the opening track, the bass and drums hold down the Tiger Army fort while Nick 13’s guitar work transitions from post-punk power-chords to emo-gothic picking parts to tremolo-bending surf-rock glimmer and the occasional folksy twang.

The other Tiger Army constant here is Nick 13’s lilting vocals, as he howls and croons about lost and unrequited love. Even the most hopeful moments are morbid, either looking forward to a romantic reunion in death (“Afterworld”) or extolling the virtues of stalking someone to be with them (“Hotprowl”). The vocals hooks are melodic and, thankfully, come across as heartfelt and melancholy rather than whiny. The one glaring exception is on the track “As the Cold Rain Falls,” which digresses from the Tiger Army vibe towards synth-saturated, 80’s sounding schlock, with lines like, “As the grey sky opens my heart sings/I carry a torch as the New Year rings.” Really? Really? Nick, you’ve got tattoos on your neck for Christ’s sake!

One steamer of a song aside, the album is great. The highpoints include the anthemic single “Forever Fades Away,” the catchy as hell “Ghosts of Memory,” the Mexi-Cali sounding “Hechizo De Amor” (which will make you want to drink beers on beach in Baja California at sunset), and the slow strummer, “Where the Moss Slowly Grows,” which may have the biggest hit potential.

All in all, Music From Regions Beyond is a solid album, and if it’s mainstream recognition and fame Tiger Army are after, they might just have found it.