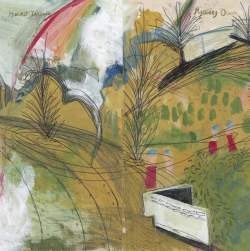 Clocking in at under 25-minutes, Mystery Ocean is a quick listen, but don’t let the timestamp deceive you: Mystery Ocean is truly vast and not easily digestible. Instead, it’s chockfull of strange sounds(some of which aren’t even instruments in the traditional sense) chewing, mewing and chatting drift into the background of tracks and, at times, drive the melody.

Hermit Thrushes cover a lot of experimental territory in their latest release, their eighth in three years, but they also have a sense of traditional melodic structure buried somewhere in there. The melodies and lyrics are simple but strong, and Yianni Kourmadas’ vocals are kept clear throughout but shine especially in “Sleeping in Your Car,” the most straightforward track on Mystery Ocean.
Starting off the last third of the album, “Sleeping in Your Car” is a welcome respite from the muddy noise of the majority of Mystery Ocean, striking a sweet chord with its description of “the most beautiful painting” and generally playing by the rules. Put that next to a track like “Are You There,” and you might think Hermit Thrushes suffer from a split personality. Noisy, layered, and unpleasant, “Are You There” pounds on the eardrums relentlessly, repeating its dismal name and knocking on the doors of sanity with its music box intro.
Most of the tracks on Mystery Oceans lie between these extremes, alternating between brief melodies and thrashing instrumentals. “Milk Teeth” slows down for short verses of Yianni’s gentle voice, which even reaches into a falsetto in this song, but breaks down into thick noise as Kourmadas takes a breath. The frenzy of “Fifty Years” is almost reminiscent of the spastic beat of Elvis Presley’s movie tune, “Viva Las Vegas,” plus a little punk-rock edge.
The album’s closing track, “Perfect Yellow,” is Hermit Thrushes at their most calm. Beginning with simple guitar plucking, the track soon morphs from basic beginnings to include all of the Thrushes’ urges and instruments.
Very little repeats in Mystery Ocean, and every moment is fleeting. As each short track dies, it always seems like it’s finished just before you figured it out. This lack of easy anticipation makes listening to Mystery Ocean an almost uncomfortable experience, but never boring.
PrevPreviousBarfly – Rocket From The Tombs
NextI Wake Up Screaming – Kid Creole & The CoconutsNext