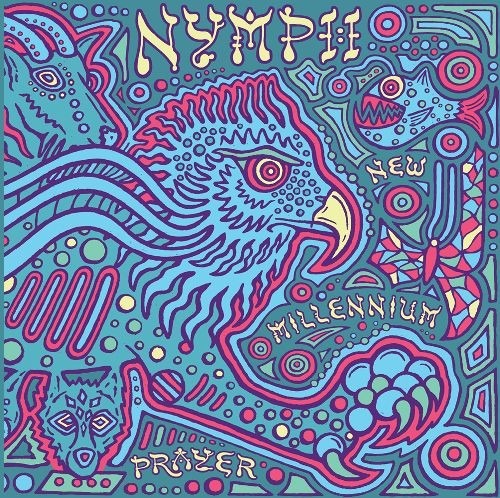 What do we pray for in the new millennium, a time largely disillusioned and godless? To guess at the blessed musical hopes of Brooklyn septet NYMPH, global empathy and peace would both be on the list. The four tracks on their 40-minute new release for Northern Spy, New Millennium Prayer, are both borderless and boundless, primed as much by cross-continental psych-rock volleys as by the limitless potential of the band’s meditative focus. These deep desert grooves collide with noise freakouts and searing free-jazz solos, making something both brimming with energy and soothing. It’s a prayer for consciousness rather than divine intervention—NYMPH knows the destiny of their dense and driving songs before they even begin.

As NYMPH’s congregation grows to seven, on this record adding Jeff Tobias on sax and Jess Stathos on congas, so broadens the reach of this music. Their mass could be had at Burning Man, in the Met next to Om, or on stage at 285 Kent. The sheer fact NYMPH is able to churn out such complex and broad burners so effortlessly itself is a kind of miracle. Which brings us back to the title: what’s the implication here? That “prayer,” as we now know it, seems to be just an act, or action? Without irony, the band’s live shows are said to be ritualistic. And this is not satirical, but a prayer in the sense they desire to be seen and to be heard. So, for 2013, file between Russian activist punk crew Pussy Riot and Mystical Weapons, the multi-compositional exploratory psych project of Sean Lennon and Greg Saunier: I don’t always know what they’re saying, I’m not sure what they’re always playing, but you can feel it means something, at least to them. It never sounds ironic.

The mix across the board is brilliant. Though the band and its compositions have grown in size, it’s hard neither to parse the intricacies in headphones nor hear the instruments seep into one another when blasted through speakers. Glittering acoustic guitars bounce between sleigh bells, wind chimes, and Jason Robira's kit drumming; he resembles Steve Shelly during his stint in Neu! Robira and bass player Nickle Emmet conduct the invocations, girding the base with an acolyte’s reprise. The other players manifest the spirits, trading wild, exploratory riffs.

The core duo of NYMPH, Eri Shoji and Matty McDermott, battle for the center of the stereo, throttling wild, worldly psych guitar against near-lingual vocal howls. If this had come out thirty-five years ago, it could easily have been filed under World Music. Shoji has a vocal style a language in itself, not too far off from Yoko Ono’s or that of Eye from The Boredoms. McDermott and secondary guitarist Jim McHugh shred alternately as stuttering and clean as ‘60s Pakistani players like The Panthers, or as reliably bouncy and melodic as ‘70s Nigerian strummers like The Hykkers, or as stoic and burnished as Malian players like Tinariwen. Throw those tapes in the deck of Rat Fink’s first hot rod, add a Motorik engine, and slam the gas: NYMPH isn’t afraid to let a riff bleed. And there’s the sacrament. It’s a new millennium. This is just one kind of prayer.