None Shall Pass – Aesop Rock 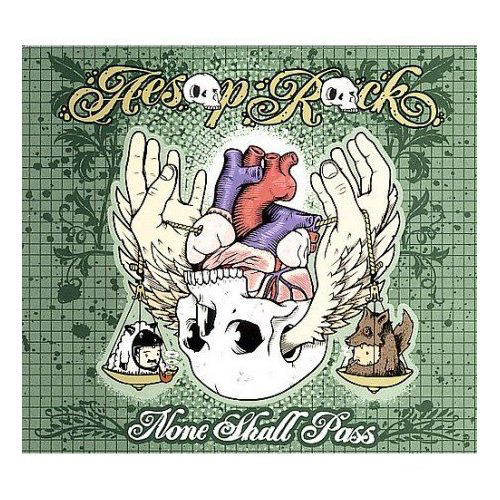 In 1997, Ian Bavitz (AKA Aesop Rock) gathered a compass, a helmet and some Ritalin and embarked on a journey into the center of his brain. He surveyed and plotted, documenting the details of each memory, fantasy, disaster, and emergency. Every year or so, he came back with something new to tell people about and the deeper inside he managed to get, the weirder his stories got.

None Shall Pass is Ace Rock’s eeriest and most personal collection yet. Childhood reminiscences (“Catacomb Kids”) juxtapose with unequivocally adult matters like substance abuse (“Fumes”) and he even artfully laments the loss of Pluto’s status as a planet (“Bring Back Pluto”). It’s as if his life, and his gray matter, are flashing before our eyes.

Aesop Rock raps like his brain is on speed and his lips are on Quaaludes. I often listen with bated breath, wondering if the tightly coiled spool of words he recklessly lets loose will make it out OK. And while his rhymes do always get to their beats on time, it’s pretty rare that their intended meanings sink in on the first, or even the fourth, listen. No one’s going to crank, drop, or shake anything during Ace’s hottest jams, but that’s irrelevant. No amount of Chicken Noodle Soup is worth that moment when you have your headphones on and you figure out what the hell Ace is talking about in that one puzzling verse.

The moment you press play, “Keep Off the Lawn” establishes the scene of a mad scientist’s laboratory; thrashing guitar chords dissipate like clouds and suddenly walls shoot up and you find yourself surrounded on all sides by flashing lights, whirring machinery, and bubbling test tubes. The tension releases big time in the call and response chorus – “How alive? Too alive!” – his best live show sing-along since “Daylight.” On the title track, glowing orbs of synth bob and weave amid a thudding bass line and Aesop’s masterfully syncopated flow dares you not to nod your head. “The Harbor Is Yours,” another major standout, is Def Jux-does-sea shanty as our protagonist pairs up with labelmate Rob Sonic for a funked-out, stuttering pirate tale that big-ups Biggie and illustrates Mr. Rock’s extraordinary gift for storytelling.

There is a lot to love here. El-P shows up on a few tracks to twiddle the knobs and drop some science, and the rapport between the duo makes an awesome case for a backpacker buddy cop film, not to mention further guest spots from Cage, Breezly Brewin, and Mr. Lif and thoughtful production from Blockhead and Aesop Rock himself. But a little Aesop goes a long way. None Shall Pass requires a certain level of dedication from the listener and after about 45 minutes, it’s difficult to give the music the attention it needs. Ultimately, taking the time to untangle these yarns is more rewarding than not and personally, I am already looking forward to what crevices of his skull he shines his flashlight on next.