Of All Things I Will Soon Grow Tired – Joyce Manor 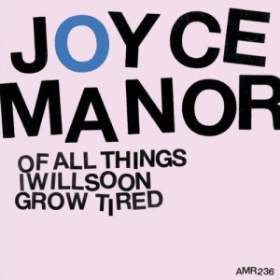 This is the album—Joyce Manor is the band—for Matthew Caws's restless and unfulfilled happy kid. Of All Things I Will Soon Grow Tired is thirteen minutes and fifteen seconds of suppressed rage, concentrated apathy, and unsettling alienation set to a remedy of distorted melodies and howling vocals. You need to listen to it because two negatives make whatever and the joy of commiseration and mutual heartbreak will lift you up. Or perhaps you will simply allow yourself to revel in it. What the fuck else are you going to get done in 15-minutes?

Following their two equally short, slightly punchier albums (Joyce Manor, the 2011 debut album, and Constant Nothing, their 2010 demo collection) Of All Things… subtly alters the established Joyce Manor formula of driving post-punk, melodic guitar rock to tremendous effect. The twenty-second noise freakout at the end of the opening track, “These Kind of Ice Skates,” initiates the shift, and is taken up again in “See How Tame I Can Be.” Here, driven by a seemingly processed running bass line and simple drum beat, rounded out with a polyrhythmic pair of jangling guitar riffs, JM nail the listless feeling of rejection and isolation:

“I’m right here. / But hey don’t worry about it I don’t care. / Learning to do without it. / Laying on the couch and staring at the wall like nothing at all. / See how tame I can be; in the reflection I watch myself watching TV.”

From there the album lulls the listener into the ruminating demo-fi “Drainage,” a quiet, lightly-picked companion to the lonely narrator of “See How Tame,” before kicking into a—honesttogod—demolishing cover of The Buggle's MTV hit “Video Killed the Radio Star.” As we know there are two kinds of covers, “note for note” (such as The Presidents of the United States of America's own disastrous version of this song) and “total reinvention” (of which—Cat Power, et al.) This is the latter kind of cover, and for that you should be fucking grateful because now that song will make you feel something other than nostalgia (which, Jesus, have you heard the original lately? It's terrible). Joyce Manor manage to maintain the same disaffected voice established in the first half of their album while reinventing the lyrics and melody of a novelty hit AND setting you up for the 1-minute-and-8-second right hook, “If I Needed You There” (punk red meat. See also: Track 2, “Comfortable Clothes”).

Wrapping up the album are “Bride of Usher” and “Violent Inside,” two of the album's more elaborately composed tracks, weighing in at a combined 3 minutes and 49 seconds. “Bride of Usher” builds out of the thrashing “If I Need You There” with another mid-tempo, dolcet-toned anthem, equally mournful of people and things past yet hopeful for the present (“And no, I don’t remember anyone I haven’t seen for years. / I don’t remember being anywhere but here.”) “Violent Inside” is an exercise in a riff suppressing the Id (“You take a person that’s so well dressed / And I will feel violent because I feel violent all the time inside of me.”)

But the closing track, the very brief but earnestly affecting acoustic demo “I'm Always Tired,” serves as the album's defining coda. Over a propulsive, grainy acoustic guitar JM give voice to the stagnant 21st century man:

“I lay awake now, I entertain my plans / To one day miraculously be talkative and likable, / To wake up as someone else, someone I know is inside of me, / Just waiting to be put to use by something much more sharp than us. / They pry out every fucking piece and still they’re coming around again.”

Joyce Manor's concise melodies, powerfully evocative lyrics, and “just the facts, ma'am” approach to song structure make Of All Things… an invigorating, essential rock record for every happy kid stuck with the heart of a sad punk.