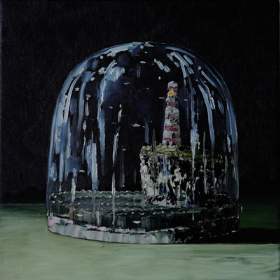 At a dinner party in the East Village prior to Christmas, I asked the host about what he thought of The Caretaker. He said simply, “You could make a movie around his sound.”

Filmmaker Grant Gee had the same thought for his latest documentary focusing on German writer AG Sebald’s The Rings of Saturn. I have yet to see Gee’s Patience (After Sebald)–it premiered in the UK in late January. I assume I’m in the majority at this point, so, for now, we can take Leyland Kirby’s soundtrack to the film as the next offering in his growing oeuvre as The Caretaker.

Since 1999, Kirby has gone by a handful of names, and even by his own with a couple of eponymous releases in ‘09 and ‘11. But none have penetrated the critical spectrum as much as The Caretaker. The moniker is derived from Jack Torrance’s role at the Overlook Hotel in Stanley Kubrick’s The Shining, and, originally, the focus of the project was more of an embellished sampling of The Shining’s vintage orchestral offerings by Henry Hall, Jack Hylton, and Ray Noble.

Selected Memories of the Haunted Ballroom is where Kirby first sank Hoover-era ballroom selections under an exaggerated wash of archival vinyl static. Until last year’s An Empty Bliss Beyond This World, Kirby’s signature foreground of hiss, crack, and pop rarely found a solid and consistent balance with the sampled materials. According to The Caretaker’s Bandcamp, Bliss was intended to “reflect the ability of Alzheimers patients to recall the songs of their past.” Regardless, you didn’t have to have a Psych degree to appreciate the beauty and power of the nameless ballroom samples on multiple levels.

There are similarities in Kirby’s latest. The archival static. The loops. The repetition. But this is from a whole nother angle. This is Kirby adding his Caretaker touch to the works of Franz Schubert’s Winterreise. Considering these tracks were concocted prior to Bliss, the balance of the sample and static makes a lot more sense. This is Kirby’s new era of “shining.”

While Schubert’s Winterreise is Baroque in its essence, Kirby manipulates his sampled dissections into an almost 12-song affectation of Gothic liturgy. Ken Burns would drool at the chance of incorporating the hypnotic spells of Patience into a documentary piece concerning the writings of Clara Reeve and Edgar Allen Poe.

“When the Dog Days Were Drawing to an End” is, ostensibly, the most beautiful. The mesh of major and minor keys connecting the warped “woosh” vocals fixates the mind into a loop of an endless, solitary waltz. If Kirby was ever concerned with the connection of repetition with memory, then this is where the concept holds the most weight. Each loop is a deeper draw into the subconscious, a further dissent into the imagination. The individual is pitted against their mind’s ability to keep up with the song’s feet which adds a variation to each identical refrain.

On the following track “A Last Glimpse of the Land Being Lost Forever,” there’s a glance into what even Ken Burns would consider a worthy addition to his most heralded work on ‘The Civil War.’ Sincerity in narration rarely finds such a complimentary partner as this.

The opener “Everything Is On the Decline” waxes the dark, emphasizing not just the archival static, but what seems to be artificial static emphasizing the separation of the original works and the touch of Kirby. This characteristic is extended until “Dog Days,” left alone, then revamped with “I Have Almost Come Invisible, To Some Extent Like A Dead Man.” A track that races and holds the static and resonation of the minor progression in a whirlpool of tenebrous key bass.

With the concept of Patience, Kirby demonstrates an understanding of the source material and his own devices which gives his work the ability to exist outside the realm of just music. An understanding that is now not only worthy of but part of the cinema, and a product beyond the boundaries of the images which it is intended to soundtrack.