Playin’ in Time With the Deadbeat – Slug Guts 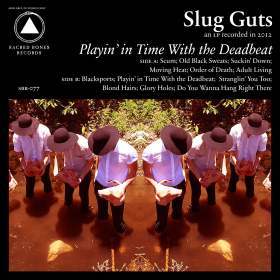 Australian post-punk act Slug Guts return with Playin’ in Time With the Deadbeat this week, the band’s most definitive work to date. The album is the band’s third and largely their most realized—with a change of lineup and the addition of saxophonist Nick Kuceli and bassist Cameron Hawes, points of ugly desolation are secured. In a word, Slug Guts are scarier than ever.

The record, as a whole, seems to come from a place of desperation. It has been published many times over that this album was written over a tumultuous year for Slug Guts, defined by trips to “the mental hospital, jail, court trials, death, and rehab,” and yet somehow manages to create the best music of their career, one of a focused violence.

On more than one occasion in Playin’ In Time With the Deadbeat, Slug Guts mesh all instrumentation into one massive soundscape, a frighteningly grinding omen; the word ‘doom’ easily thrown around. The band brings to mind other filthy punk bands of Australia’s musical past, most namely Venom P. Stinger with their haunting growls— vocals that demand you listen though the words are blurred.

And within all the misanthropic melancholy, Slug Guts manage to position themselves inside brief moments of respite—as in the inviting guitar riff that opens “Adult Living” or the intimate break in the middle of “Moving Heat,” quickly partnered with a slow moving, gentle sax line.

Stand out tracks like “Stranglin’ Too You” rings of a dark sexuality, largely unromantic yet characteristically less aggressive than the rest of the record. “Old Black Sweats,” maintains a unique blend of blues-y distortion and subtle sax, feeling at times beautiful but mainly damaged.

Playin’ In Time With the Deadbeat is the sound of a band with little discipline, the kind of suffering that translates into something powerful and desperate and undeniably interesting.