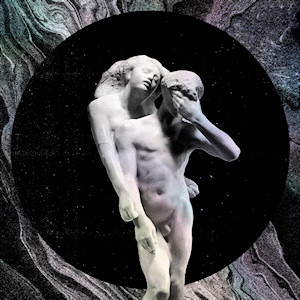 According to Win Butler, being in a band is tough; being human is even tougher. On Arcade Fire's fourth LP, Reflektor, Butler and his band prove to be at their most metacognitive, considering the abstractions and distortions of fame, suggesting a similar group of pitfalls for the modern human condition. These reflected experiences emerge as doubles and mirrors, band and audience as inversions and refraction in the pursuit of a coherent and authentic self.

Unsurprisingly, Arcade Fire appears in the video for the eponymous single, “Reflektor” chasing a man in a suit of mirrors as both themselves and wearing over-sized papier-mâché heads in their own image. The dialectic is obvious as Butler's lyrical imagery recedes into infinite regression, “Just a reflection of a reflection of a reflection.” Even the cover art depicts a Rodin sculpture of Eurydice and Orpheus, two intertwined lovers separated by tragedy. In the world of Reflektor, we are both life and death, heaven and hell, products of the terrible pornography of modern life, the divisions inherent to watching and being watched. For a band who meditated on death on their first LP, the depressing Bush administration on their second, and the beauty, boredom and nostalgia of childhood on their third, Reflektor drives the journey inside. The wilds of these interiors contain such terror for their ability to seemingly divorce us from ourselves. Win Butler and Arcade Fire seek out a journey to this personal underworld in order to restore a single state of man and band.

The band's popularity is, at the very least, part of the unsettling calculus for Butler. He sings, “Our song it skips on little silver discs/ Our love is plastic, we'll break it to bits” on “Reflektor” suggesting a commodification of the band, a plasticity of their art, and a desire to shatter this construction. Being even relatively famous is likely as weird as anyone who isn't famous might think it would be. People stare at you; what is it they think they see? An audience necessarily reflects and refracts the objects of its affection, or as Butler puts it on sexy, bass-driven “We Exist”, the relationship between viewer and viewed is generative and destructive at once: “They walk in the room/ staring at you/ talking like we don't exist/ but we exist”. The artist is split between their authentic self and their perceived performative image. Advancing the argument on “Flashbulb Eyes”, easily the band's most experimental track on the album, Butler muses, “What if the camera really do/ take your soul?”, before urging his audience to “hit me with your flashbulb eyes”. It's possible to imagine the sea of iPhone video screens that accompany the experience of being in a crowd at a concert; the band just sees it from the other side of the camera. “Flashbulb Eyes” grants their audience a sort of X-ray vision, the power of the gaze to rob art of its mystery, to reduce flesh to bone, to take their souls. Butler wails, “I've got nothing to hide”, intimating that unity might well lie in transparency.

“Normal Person” begins an miniature two-song arc in the middle of Reflektor exploring these questions over the value and peril of performativity. By the middle of the album Arcade Fire becomes a band playing Arcade Fire, the type of circular inversion that leads to wearing a gigantic papier-mâché mask of yourself in your music video. Audible applause and guitar feedback appear on “Normal Person”, complete with stage banter, Butler shambling, “Those monitors are a bit high. Sorry about that, thank you guys so much for coming out”, to an audience of everyone and no one. The performance is the recording, and the record is the performance, a structural mirror. But this division cannot hold. Butler's circumspection of their chosen art form grows moments later, asking, “Do you like rock music? Because I'm not sure I do”. The following song, “You Already Know” opens and closes with a mock television emcee announcing the band, the titular lyrics, “You Already Know”, mumbled just fast enough to almost pass for the word, “original”, leaving the audience stuck between epistemology – what do we already know? – and what was ever authentic to begin with. Butler closes this loop singing, “Please stop wondering why you feel so bad/ When you already know”, though it is unclear if this is directed at himself, his listeners or both. Playing yourself is hard, especially when you might well be split in half.

It is, perhaps necessarily, a love story, but the affection is for a unification of the self. Butler focuses his fascinations on this dualism: desirous and loathsome of normative behavior on “Normal Person”, struggling for and menacing with his existence on “We Exist”, heaven and hell on “Here Comes The Night Time”, life and death on “Afterlife”. The self represents the great unknown, split into halves through the terrible forces of modernity: the ability to watch and be watched, art reduced to little silver discs, life reduced to death, humanity reduced to imagery. How would we reunify ourselves if we can't grasp how we were ever cleaved in the first place? The David Bowie-indebted “Awful Sound (Oh Eurydice)” and “It's Never Over (Oh Orpheus)” mirror each other in the fashion of the myth from which Butler derived their titles and inspiration. Two lovers, intertwined, nearly indistinguishable, driven apart in the death of Eurydice, and the mourning music of Orpheus as the only potential rescue from the underworld. Orpheus makes it back in the myth; Eurydice is not so fortunate; Butler lies in both worlds. His love is authenticity, his music is the supposed realness of the self, an inseparable state of oneness lost and driven apart. These songs represent the only path back from Hades. This journey up or down is a trip inward. On “Here Comes The Night Time” Butler poses, “But if there's no music in heaven, then what's it for?”, the search for salvation essentialized as the personal, “When you look in the sky, just try looking inside/ God knows what you might find”.

What, then, is the state of Butler's split self, reflected and refracted into two halves? On the electro head trip “Porno”, the band finally asserts knowledge of self beyond artifice and modernity. The synth stabs pound below Butler's brittle falsetto on the song's chorus, a rehumanization of singer and his invisible partner, “and all your make up, just take it off/ I've got to find you before the line is lost”. This is the power to clearly see and really be seen. It is a universe that strips and vulgarizes, that “makes me feel like something's wrong with me”, and the band finally pleads for escape, “the boys with their porno/ this is their world, where can we go?”. The answer lies nowhere but inside. “Afterlife”, the album's best song by a wide margin, suggests a life on earth, a yearning but unified humanity, a willingness to “scream and shout until we work it out”. Heaven and hell both live inside; they are our division. Reflektor presents itself as an against-the-odds reunification of the long lost authenticity, even a singular humanity. Or maybe life is what happens on the way to death, the beautiful and ugly, unsexy sacrifices standing in the face of mortality and modernity. Unity is the only brand of immortality we are allowed. Reflektor's last track reunites the self on the beautiful and elegiac “Supersymmetry”, a literal merging of two mirrored halves. Butler and Régine Chassange's voices lock in a delicate duet, an indication in form of what has already been posed in function. “Want to feel the spring” they sing the promise of this rebirth of self. It's an unsettling but powerful reunion, two singers finally recognizing their own voices as more than distorted reflections: “Heard a voice like an echo/ But it came from me”.

Reflektor proves to be a record about existential survival: Arcade Fire's survival as a band amid their own fame, our collective human survival in an age of screens and cameras, selves projected and reflected, both immortal and transient. Butler sings this hymn to the present as, “Afterlife, what an awful word.” The album represents a trip into death, an exploration of the darkest corners of modern life: the knowledge that we will die and our lives may have no larger meaning. We are, finally, alone, if we can only survive our own internal divisions. We are heaven, and we are hell. But, unlike Eurydice, we make it back with Butler this time, or he decides to stay dead with us. Reflektor is the way back above ground for our lost half or the way to spend forever unified beneath it. In either case, it represents reunion, what a wonderful word.