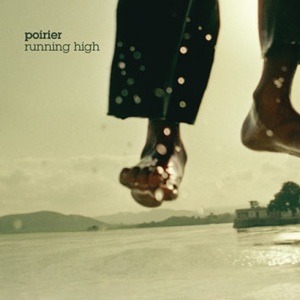 Dancehall revisionism is in the air these days. The lads from These New Puritans utilized the dance beat structure to create marching riddims throughout their album “Hidden” while Diplo and Switch have been busy bringing their own strange bastard breed of Babylon with the Major Lazer project, going so far as to record in Bob’s sacred Tuff Gong studio on Kingston’s Hope Road. In addition to this new school is Montreal’s own Poirier with “Running High” with one drum machine steeped in the tradition of early 90s Detroit warehouse dance mixes and a persuasion for current electro-reggae-dubstep-steady trends.

The club treatment of toasters like Mikey Dangerous on “Can’t Stop My Flow” and Face T on “Enemies (Sticky Remix)” boasts like Mavado thizzin’ at a club in Ibiza. You can hear Poirier’s dedication to the art of sequencing modern booty-bass dance samples alongside Euro dance’s structural bells and whistles so it's guaranteed to please fans of Germany’s Moguai (no, not Mogwai, these dudes are pure techno yo). Haunted perhaps by his rave days, the rest of the second album continues down a remix path as he reworks the first disc through a series of club-approved dub wise alternate versions.

These remixes, by Wildlife!, Mungo, Uproot, Marflix, Maga Bo, Stereotyp, and Poirier himself, provide diverse revisions of riddims for the album’s vocal talents. On the first half, those vocal heavyweights are at full strength on top of Poirier’s clever production stitch, one that reintroduces Jamaican dance floor knowledge to the pilled-up blokes waiting nervously in line at 1015 Folsom. No doubt the same club folk would dig the dance takes on the second disc as further listening for the same cover charge.

With a style that is as immersed in violent third world struggles as it is a hedonistic spirit, Poirier could take his sound deeper with a “conscious” focus. Through further exploration into the Nyabinghi realms, those that drive the center-core percussion of modern roots, Poirier could harness greater focus into his already impressive dance productions.

Conscious roots gave us the innovations of King Tubby’s studio and massive productions, Prince Jammy’s contributions to dance hall, Sly and Robby’s colossal drum and bass back beats, and the modern dance hall creeds of Anthony B and beyond. With similar inspiration, Poirier's blend of rough streets and club beats could enjoy a solid foundation to further build from.