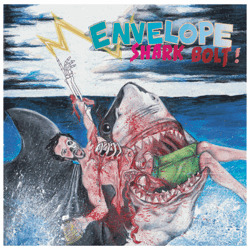 I have been concert acquaintances with Blueprint of Weightless Records since I bought a Soul Position t-shirt out of his trunk as an eager 18 year old. Three years ago while talking to Blueprint at a show he introduced me to a protégé named Envelope, telling me this was the next big name in the Weightless camp. At the time, I gave two shits; he probably felt the same towards me. Envelope won me over as a performer a year later, as a drunken, carefree, kicking good time rhymes rapper who appeared to enjoy performing more than pushing units.

Envelope does not need to work for converts; he has a candor that welcomes like-minded jokers and mid-day tokers. From the jump, he roped me in on “Ain’t Shit Changed” with “so how about a little bit to wet the beak / and a little bit more to red the cheek / can’t stop now until my efforts peak / and them 7n7s get the best of me.” I still get a red streak on my face (from a drunken fight with the pavement) after too many sips on that Seagram’s 7. Perhaps Envelope and I share too many common interests, making this review biased from mutual vices, but his forthrightness begs camaraderie. Even when Envelope pines on “Beautiful Women Never Grow Old” of never having a chance with Kathleen Hanna, the reference might alienate some, but we can all appreciate a woman who “keeps it real / go from a wet t-shirt to bikini kill.”

Envelope is in debt to Blueprint for Shark Bolt’s potential success. He has the gift of gab to carry an album with minimal guests, but without Blueprint, it's just a funny, insightful spoken word album. Blueprint knows his label mates well, as the production does not sound interchangeable for an Illogic or Greenhouse Effect record. He knows Envelope thrives in a boom bap pattern with soul and blues samples that leave room for him to operate. By playing to his strengths, Envelope exercises a skill rarely seen in white emcees: the Ghostface Factor. Envelope can whine, laugh, shout, or nonchalantly brag without ever sounding awkward. He can flex the Masta Ace circa Slaughtahouse “offbeat/onbeat” flow, pausing frequently to accentuate his jabs as we ponder over “if I'm a ghost I can rock that for real / just give me Demi Moore and a pottery wheel.” This expertise is testament to Envelope’s commitment to his craft, even his natural cadence, but without Blueprint’s clever board work, a witty emcee’s talent would go to waste.

Shark Bolt is far from a magnum opus, hopefully a far cry from all Envelope has to offer. The title track suffers the usual jinx of being the weakest song, mostly due to a mess of percussion and push-button production that betrays the soulfulness of the album. Envelope's writing exercises an acute attention to detail, but he has some aging to do. His contemporaries in the category of genuine rappers are all in their 30s. The album already seems dated as Envelope is dealing with trivial young man shit, while his contemporaries get their grown man woes out.

It may be a strange critique for a writer who walks a parallel path with the emcee, but if hip-hop is starting to grasp the idea of adulthood without risking belligerence, then is a responsibility to grow prematurely placed on its younger generation? Maybe I am exaggerating the effects of influence, but I cannot help wondering if Shark Bolt will be overlooked this year, due to a certain someone being ahead of the curve once again, pushing independent rap in a new direction. Yet with all the lighthearted youth vs. mid-twenties uncertainty Envelope embodies, he should be commended for dealing with it on wax.

Closer “How Did I End Up Here” is an affirmation of the next step for this middle man, aware of his situation (“this ain't what I pictured / woke up this morning my aim was so different”), but not ready to dedicate an album's worth of material towards the heart-break dark days he is living. Shark Bolt can easily be digested as a party album, but Envelope's broke playboy swagger is a defense against his troubles. Book-ending the record, Envelope opens missing recently deceased Columbus DJ SoWhat?, but admits on “How Did I End Up Here” that “I say shit, don't play it safe / I live life like death is fake.” Subtle in its delivery, I admire Envelope for managing to nail exactly how life feels for a post-twenty one year old. We still have our immortality complex, but are developing an awareness of insignificance.