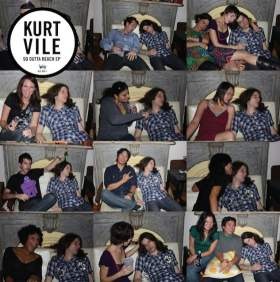 Keeping your feet on the ground while listening to Kurt Vile is a hell of a task. Vile’s music floats in the realm of inaction, contemplation and dreams, sucking you up into space faster than a tractor beam. So Outta Reach, the name of his latest EP packaged with the deluxe edition of this year’s Smoke Ring for My Halo, is perhaps the simplest phrase you could use to describe Vile’s signature lie-around style.

The six songs on So Outta Reach are more of the same for Vile – he is, after all, a creature of habit – but I’m definitely not complaining. The best songwriter to emerge from lo-fi so far, Kurt never seems quite settled, constantly stretching within the boundaries of his own skin with melancholic growing pains and producing music almost obsessively. Kurt’s songs live in the middle in every way – he never tells the whole story, never reveals the punch line to an inside joke, and even now that he’s emerged from his mumbling roots to a more clear vocal presence, his voice still distorts itself with echoes and pulled letters.

Known for repeating himself and re-recording his own numbers, Vile doubles back even inside this small record, reprising its second single, “Life’s a Beach” into the EP’s final track, “(so outta reach).” The original cut, “Life’s a Beach,” is almost too upbeat for Vile, spewing sunshine and optimistic escapism, but “(so outta reach)” takes the happiness down a notch, singing slower and more vulnerably. Somehow, this takes the song back into Vile’s most traveled and intimate territory. Kurt’s unchained melodies deal with the true terror of being nowhere as much as the ecstasy of the in-between. He records the nervous thoughts that dominate a mind with too much time as they fade into apathy and emerge again into passionate moments of pure conviction…only to fade to black once more.
Rather than simply creating a beautiful place to escape to, Vile shows there’s really no escape. We chase ourselves, and restlessness always follows. With classic, Vile-style restless daydream numbers like “The Creature” and “Laughing Stock,” as well as an awesomely rockin’ and surprisingly straightforward cover of Bruce Springsteen’s “Downbound Train,” So Outta Reach is yet another memorable release from Kurt Vile. Even as the Philly fuzz rocker ducks our fingertips, he draws us in, managing to tell our story without telling much of his.
PrevPreviousParallax – Atlas Sound
NextDeep Impressions – KatalystNext