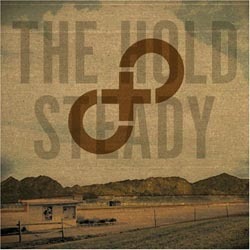 Four years ago it was great to know Craig Finn was back in a bar band; naturally we were still in the bars. He was feeling anxious and disconnected, and he'd found us a common ground: we were at parties that got druggy and ugly, half dead in a disengaged scene. These days, there are unified scenes, the kind Finn always dreamed of. But just because we're getting off on it doesn't mean we get it. A griot of a crestfallen generation, we clever kids are lucky to have Finn encouraging us to stay positive, now that we do not feel as clever as we used to.

From Jump Street, he insisted on starting with a positive jam. The Hold Steady’s latest album/mantra Stay Positive maintains this insistency, opening with “Constructive Summer” the chorus chants “we’re gonna build something this summer,” as though the friends he boasts of are right behind him with hammers and nails. “Constructive Summer” is this years “All My Friends;” it's that warming camaraderie tune that lets you liken your friends to “the drums on ‘Lust For Life’” or smile knowing you “might drink too much, but [you] feel fine.” I can already hear the audience, city to city, this summer waiting for the jingoistic chant “get hammered” with plastic 32oz cups raised high.

It is all fine and dandy to think a new batch of bar songs are coming just in time for another summer, but what if those songs blasted from stadium speakers instead of jukeboxes? What if The Hold Steady went on a baseball stadium tour? It is starting to become a possibility. Personally, I would follow that tour until the wheels fell off. But, my point is Stay Positive is a transition album, as the band leaves our bar, headed for the big stage. Will you get bitter? On the title track Craig Finn’s vocals have a lifted echo effect, mimicking the delay ricochet that you catch from the sound bouncing off the rafters or open air surrounding skyline. Stay Positive is a big record, gargantuan in sound, groomed for stadiums, yet grounded in familiar dialogue.

Operating through references to folklore culled through three albums, the ideas and locations feel like home, but Finn has altered his character list. Holly still lingers in the text, but she seems older, burnt out from the life or the lull of spirit from a resurrection that lasted too long. “Lord, I’m Discouraged” is a Holly story, as Finn plays the friend who has to watch her excuse domestic violence, telling him “the sutures and bruises are none of my business” over fortified wine. Perhaps Holly is partying with townies in “One For the Cutters,” or Finn has a new generation of characters, equally troubled in a fateful routine, because as he says in “Jokes About Jamaica,” “We were kids in the crowd, now we're dogs in this war. We were wasps with new wings, now we're bugs in the jar. We were hot, soft and pure, now we're scratched up in scars.”

Holly knows how a resurrection feels; she's been canonized, and now she has to live out the remainder. Finn’s overarching theme is not to just stay positive, but to remain optimistic in the twilight of your life, as your old habits die hard and you become an outsider in your scene or a weird townie worrying “when one townie falls in the forest, can anyone hear it.” These are the warnings of hanging on to a former life. He sums it up in “Yeah, Sapphire”: “dreams they seem to cost money, but money cost some dreams.”

It begins with the naïve optimism of youth in “Constructive Summer” or the nihilistic sexuality of “Navy Sheets”, playing out like an alternate take of “Chillout Tent”. But the deeper within the record you go, the harder it gets to stomach. The saps of the record recall that cringe feeling you get watching a local bringing a keg to a teenager’s party or the burn out bar fly at a college pub eyeing young girls. On “Slapped Actress” Finn inserts himself into the burn-out role, begging a friend, “Don't drop little hints, I don't want them to guess. Don't mention Tampa, they'll just know all the rest” as he hides the fact that Ybor City almost killed him again.

Working against senectitude is Finn's bizarre fascination with mysticism, something that was never present in the previous albums. References to visions of angels or clairvoyance are littered intermittently as a subtext in the record such as “I was a skeptic at first, but these miracles work” on “Yeah, Sapphire”. The visions dominate narrative in “Both Crosses” as Finn speaks of a woman, possibly Sapphire again, who “saw the film right before it came out,” a manifestation that had him “thinking about both crosses.” It's difficult to grasp the significance of these visions, outside of a cause for revelation. They lead to disaster, one of which changes Finn’s outlook, but later he makes Sapphire keep them a secret, “Don't tell my sister about your most recent vision. Don't tell my family, they're all wicked strict Christian.” I guess, it all comes down to Catholicism, a subject I do not know enough about to comment any further.

Should The Hold Steady leave the bar flies for the arenas, it remains there in spirit, still eager to pick us up from the amber drowning pool, talk us through the dry heaves, sooth us through the hangovers, and nurse the self-inflicted wounds, because year after year, Finn gives us annual reminders that we can all be something greater.