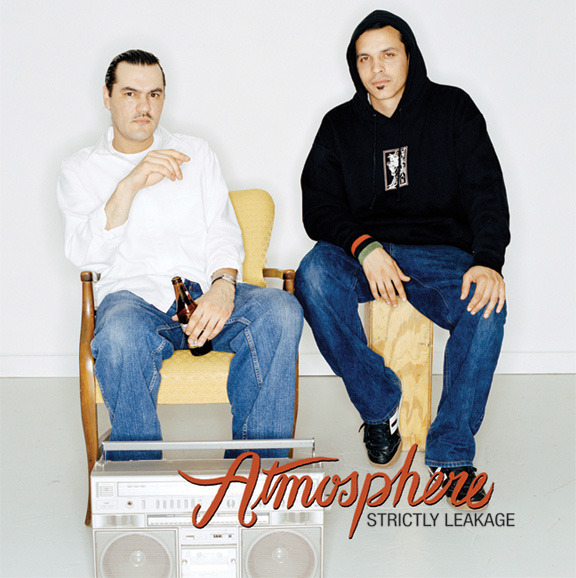 Over the holidays, Atmosphere gave back to the fans with a free downloadable party album, Strictly Leakage, featuring Slug and ANT confiscating classic sounds and song concepts to give it their own personal twist. Even though I feel I should have no business critiquing a record that is free, Slug has made some changes in his approach to writing that begs comment.

Strictly Leakage's strengths come from the interpolated classics. Opening with a play on Big Daddy Kane's “Young, Gifted and Black” Slug proudly announces he's “young, gifted and mixed.” ANT makes each of these songs work through his ability to mimic the producers before him. Granted it did not take Marley Marl much to make a Kane classic, but recreating the Bomb Squad produced “What They Hittin' Foe?” requires more attention to detail than just looping an Albert King record.

Sluggo and the ANT (Mob) are jackin' for beats on this party record, updating a Cube craps classic into the modern thug game —Texas Hold'em because as Slug puts it “Jake needs brand new games for his Xbox.” Do things for the kids, Sluggo. It is a picky point to make, but I am surprised that “The Old Style” did not follow “What They Sittin' Foe?,” as the Ice Cube original closes with the declaration “drop an old school beat!”

But it is the closing personalization of Kool G. Rap's “Road to the Riches” that impresses me the most, in which Slug gives a narrative of his career excursion. Over the erratic piano stabs Slug spits, “dreamed about it two decades straight / way before Rhymesayers' first wax got made / the music is my love and it is my business / my name is Big Slug, I'm on the road to the…”

As much as Atmosphere rewind to simpler times withStrictly Leakage, Slug has a new writing approach, that of a wise elder that alienates him from his predominantly young audience. Most of us got into Atmosphere because of its ready admission of character flaws; we felt less like freaks hearing someone rap about drinking a fifth and passing out on his girlfriend's lawn. On “The Things That Hate Us” Slug walks a delicate line of relating vices and disapproving of those still lost in them.

Similarly, on “Get It to Get Her” Slug raps disapprovingly of deadbeat playboys and the equally squalid hussies they pursue. Nobody likes the friend who figures out its all bullshit first, even if they are right: they always come off like high and mighty pricks. Just saying.

Nonetheless (is how I often change the subject), Slug is older than most of his listeners and should be commended for acting his age. He remains a few steps ahead of his audience, giving them gems to grow into such as “Domestic Dog.” Once we all grow tired of the barfly promiscuity Slug once soundtracked, we can nod on the iPod in isle five at the market to an anthem of shopping cart flirting.