Suck My Shirt – The Coathangers 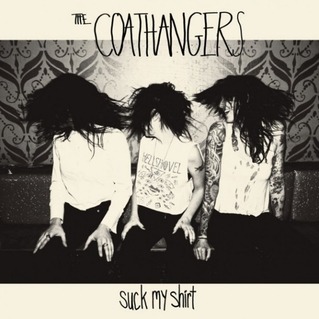 If you’re ready to start calling yourself mature, you’ll dig The Coathangers’ new record, Suck My Shirt. If you’re still clinging onto the idea of yourself as a beautiful, immature asshole, it may be a bit of a disappointment to hear the playful punk trio take another step towards somber, sanded-down adulthood.

On their debut (which, believe it or not, was seven years ago), the ladies caught your attention with a stripped-down sound that bared confrontational yet goofy lyrics about nestling in boobies, giving head, and Tonya Harding. Fast-forward a tiny brat’s lifetime into the future, and The Coathangers have largely traded in shock for an undeniably improved, enveloping sound—showing the girls are tight, talented, and a bit too serious.

Screaming a banal, one-sided “Shut Up” (where before there was a self-aware “Shut the Fuck Up”) at the typical ne’er-do-well, using zombies as a metaphor for a detached person feeling alone amongst many, and merry-go-rounds as a metaphor for going in circles in a relationship, many of the lyrics on Suck My Shirt sound recycled and tired, especially compared to the group’s earlier numbers that relied on lyrical play and party-down ridiculous release. Some songs still touch on the fucked-up and freeing, like the jump-gone-bad narrative of “Springfield Cannonball” which features a weird, muffled talking segment, too—like “Leader of the Pack” got tossed down a watery garbage disposal (fitting, given the song’s story). Even the girls’ drug number, “Adderall”, talks about taking it all to stay awake on a drive.

Suck My Shirt continues to turn in some of the band’s best-loved style points: lilted screams, earworm choruses, and energetic, mosh-worthy, build-and-release instrumentals. But the level of sanity is disappointing. Across all the tracks, The Coathangers never reach their trademark levels of unpredictable cat-scratching chaos that even the more muted-down Larceny & Old Lace saw on tracks like “Johnny.”

Instead of true unpredictability, as Pitchfork pointed out in their toe-licking review, The Coathangers rely heavily on what EDM has turned into math: the drop. “Love Em and Leave Em”, “Zombie”, and “Dead Battery” all use the big-pause-before-big-noise formula to varying degrees of success. But the formulaic nature of the disruption is what ultimately makes it dry. Add to that the almost insufferable length of the monotonous “Follow Me” and easily-understood “Zombie,” and Suck My Shirt starts to feel old sooner than it should.

Not every punk would benefit from a polish. As The Coathangers grow as musicians and just grow up, it seems like the Atlanta ladies are mellowing and compromising in the one place where no one wants that: their lyrics. Suck My Shirt would be a fantastic entry for any other first-time band, and will likely be played to the hilt live, but for these girls, it’s child’s play—or maybe more pointedly, it’s no-splash adult swim.