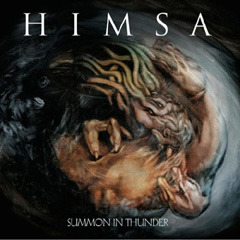 The video for “Unleash Carnage”, the first single off of Summon In Thunder, is one of those little YouTube joys. The five members of thrash-metal Himsa come on one by one dressed in bright white 70s regalia, aviator glasses, one with a sweater tied around his neck, one in a white three-piece (frontman John Pettibone alone wears black). They proceed to tear apart a tennis court in a doubles match from hell, complete with air-tennis-racket solos, pissing on things, and swatting tennis balls with your hair. It’s giddy, tongue-in-cheek aggression and shows that though Himsa maybe isn’t bringing anything new to the metal scene, at least they’re in it for all the right reasons.

This is also the fourth full-length from the band, which has been all-metal since 1998. The music hasn’t changed much, though the hair has gotten shorter (for a period Pettibone sported a forward-slicked emo 'do straight outta Bright Eyes' fan club manual) and the clothes less denim. Basically it’s power-strumming, power-drumming, power-screaming, coda, repeat. But it’s a fun bit of power-etc while it lasts.

So, Summon In Thunder is fairly strong thrash and solidly angry from start to finish, with no pauses for dumb things like love, regret or self-awareness. The closest thing to a moment of reflection comes at the beginning of the six-minute “Skinwalkers”, which opens with some sad guitar plucking before the double bass sets in. “Curseworship” sports some heavy licks worth banging a head or two to, and “Unleash Thunder” is probably the best two minutes of cathartic, screaming doom ‘n’ gloom you’re likely to have this month.

“Summon In Thunder” ends the album on an apocalyptic note. But really, it could be on repeat all and you probably wouldn’t notice, which is both the album’s strength and ultimately its weakness. While it’s going though, Summon In Thunder is a great excuse to bang your head, get into a fight, drive real fast, or go out and play tennis. Or, start a metal band, which apparently involves all the above, plus chicks.