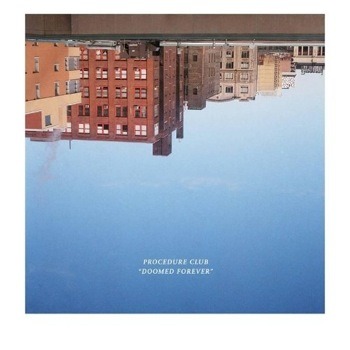 Bedroom rock is alive and well in New Haven, Connecticut; compliments of The Procedure Club. While many herald the PC’s new release Doomed Forever as their “debut,” it should be noted that this is their third release. But oh, it is their proper “debut” on Slumberland Records so of course that changes everything. Where the band’s 2008 self-titled release and their 2009 album Music for Leisure Time were exercises in noisy twee equipped with electronic accents aplenty, Doomed Forever presents Andrea (no surname if you please) and Adam Malec with a new focus. A more, er, Slumberland focus if you will. Not that there is anything wrong with that, hell these days everyone on the bandwagon is resurrecting the sound of their favorite band inscribed on the digital hallowed halls from TweeNet.

On Doomed Forever, The Procedure Club has never before sounded so “Black Tamborine.” Perhaps this was a nod to their label Slumberland’s mythic 90s twee flagship act from Silver Spring, Maryland. Don’t know if that was out of pressure from Slumberland, a gesture of gratitude, or a good excuse to find a vehicle of cohesion to root their structure in the familiarity of the safe, tried, tested and trued pop methods.

Leading off with “Feel Sorry For Me,” you hear what sounds like whirlpool washed Pam Berry vocals backed by drum machine beneath the jangly guitar. “Vermont” thrashes into what might have been Talulah Gosh fed through a Big Muff, while “Dead Bird” combines guitar parts that are blaring in the red, fuzzed up drum machine and wind tunnel echoed vocals by Andrea.

“Slut Fossil” loses itself in a cacophony of barely intelligible vocals that run for the gritty background noise tapestries for cover. “Awfully Managed Pigeons” not only has an awesome name but has excellent drum sequencing, good bass, ascending pop tones that only work to enhance Andrea’s reverb laden vocals. “Nautical Song” slogs through distortion and glitch runoff to the 1:40 mark before it finally it gets off the ground with fuzzy angelic heights. “Rather” gave me flashbacks to Lush if they were in the North London Poly riots back in ’85, “Jupiter” begins the closing ceremonies and “Seventh Circle of Hell” creates a heavenly synth pop overture that concludes the album.

The excessive reverb at times might be frustrating for those who still believe that lyrics can make or break a song, but at the same time it accomplishes that otherworldly Belinda Butcher vocal vibe that made the original shoegazers interesting to begin with. The Procedure Club’s Doomed Forever rides this modern retro twee revival with liberal use of slightly more modern drum machine technologies that are appropriately treated with all the analog distortions to sound legit. Purists will groan whilst clutching their 1986 vintage anorak sweaters while the new generation of revisionists and Slumberland completists will slurp it up like strawberry wine.