THRU. U – White Rainbow 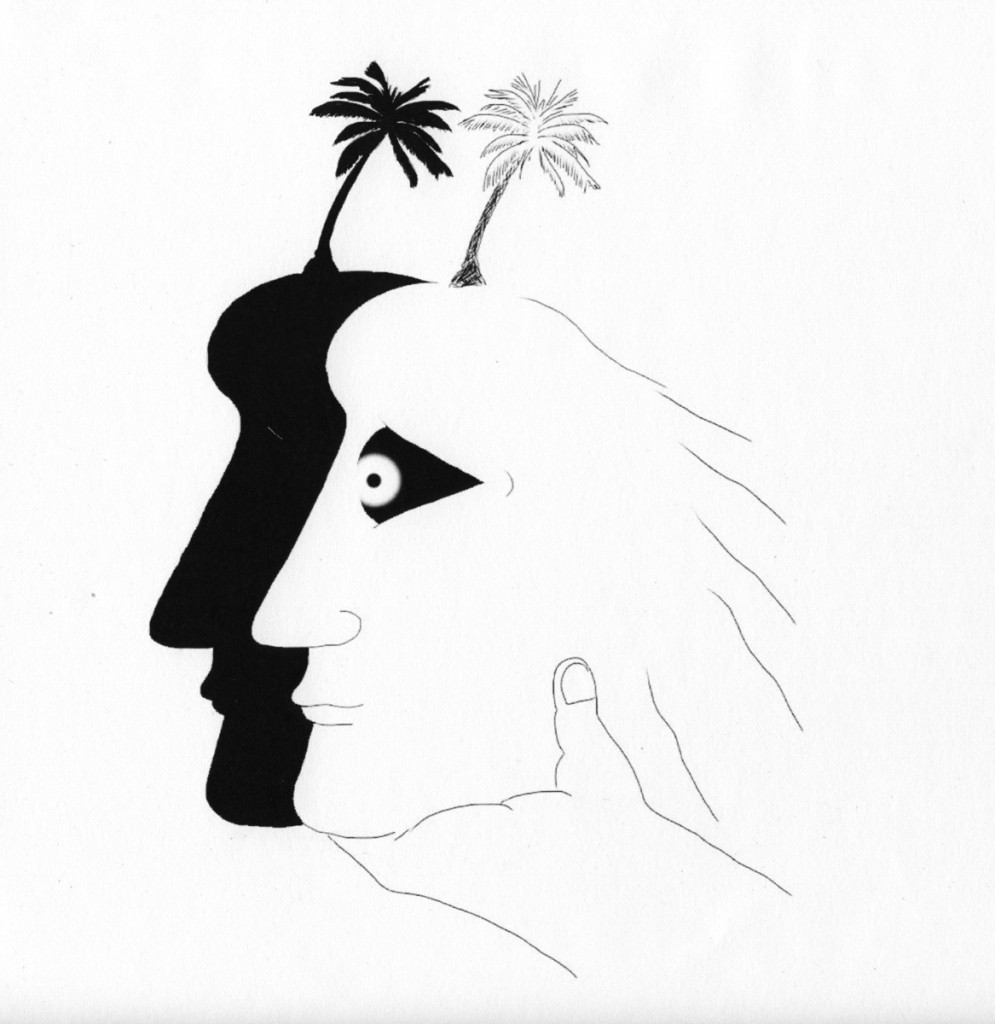 The cover art for White Rainbow’s THRU.U is a hand holding a head. The hand is positioned to look like it’s coming from the viewer, giving the head as a gift which, in turn, is growing a palm tree—that classic signifier of “chill.” And the most prominent feature of all is the head’s shadow, occupying a large, central swath of the image. More than being simply decorative, this album art is instructive. Give White Rainbow head—yours, with a chill palm tree growing out of it. Or else this album is in danger of being a blank white sheet.

THRU.U, White Rainbow’s first physical release in five years (there has been a whole slew of stuff on his Bandcamp in the interim), is loaded through with whirling, blanket-warm synths and passable, mostly unchallenging beats. If I were out dancing with some enthusiastic amigos (which I’m not), I would possibly have enjoyed this music—but in that case, would it be the music I was enjoying, or something else?

The lead track, “Batman Palace,” starts on an interesting note, with percussion that sort of pulls against itself in a neatly-panned “choose your own adventure” type of groove. The track also boasts the only comprehensible lyrics on the album: “feels alright,” which I read in the imperative, as in “it puts the lotion on its skin.” Throughout the song, there is enough variation (mainly in the percussion) to keep things interesting. This sets the listener up with expectations for some level of rhythmic engagement, which the rest of the album proceeds to knock down. Some interesting things do happen—I was momentarily compelled by the intro to “Don’t Wait,” only to be revolted by a lead-synth that reminded me way too much of Joe Satriani’s guitar tone.

So aside from the opener, and from certain porno-funk caricatures (“Cuban Egg” and “Dans On,” both of which are highlights and clock in at less than a minute), the album falls short of “interesting” on the rhythmic front. And the melodic one. And the harmonic one. But not the motivational one: “Be the Dancer Be the Dreamer,” again in that imperative voice, may have been titled ironically, but I detect no irony in these feelings of empowerment. Based on this track’s intro alone, I propose a Madonna/White Rainbow collaboration.

Tiny Mixtapes posted an anecdote in which White Rainbow turns down his music during peak moments of his show and says “I’m not here to entertain you.” Is the audience there to entertain him, then? Or is he there to offer something deeper than entertainment? I understand the appeal of giving oneself over to repetitious, trance-inducing music, and I even get that there can be something transcendent about it—but if there is any depth to this album, I can’t find the rabbithole. With that in mind, I will be keeping my head and the super chill palm tree that grows from it.