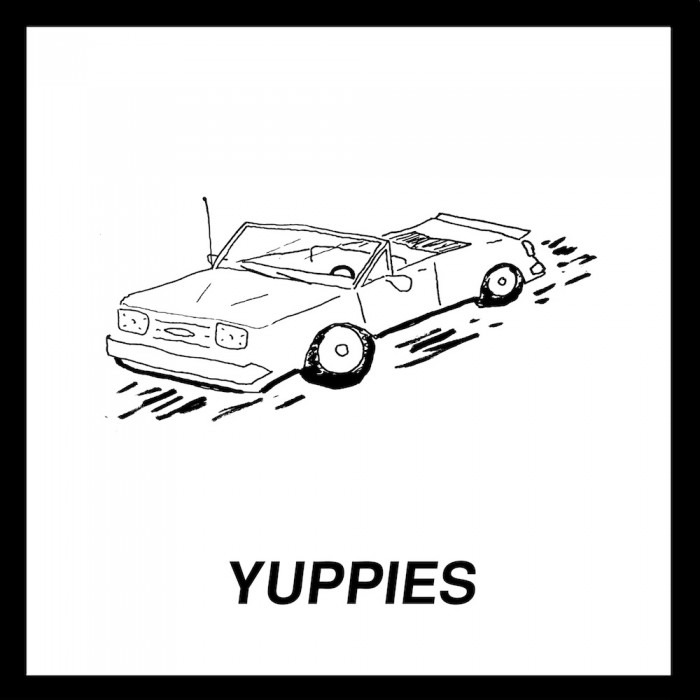 Though formed back in 2007, Omaha, Nebraska quartet Yuppies’ eponymous debut finds a champion only now, with Parquet Courts’ Andrew Savage releasing the album on his own Dull Tools imprint. Savage chimes in on the press release and likens Yuppies to “loner-poet” predecessors like William Burroughs. It’s an eye-brow raising claim, to which here’s another: Yuppies recalls the feverish denunciations of America that Henry Miller expressed in his Air-Conditioned Nightmare – all rabbithole allegories that fold upon each other until the point is nearly lost but the impassioned linguistic feat remains. There’s a lot of existential terror in a culturally deprived Midwest vacuum on this album, but as Miller ultimately grows to love the unreliable jalopy carrying him across this country, Yuppies’ deft performances and baffling song-craft are the spoils of sweat and spittle spilt in the region’s basements. Without America, we’d have neither Miller’s book nor Yuppies’ debut.

If the six year gap between formation and Yuppies’ debut LP causes readers alarm, it’s because we’re conditioned to a press cycle that hypes the newest package within months of gigging or even before the first show (and usually conspicuously boasts members’ prior credentials.) As the window for critically praising a new band narrows, some groups end up stale news before they’ve had time to congeal as a unit or realize collaborative potential between players. Consider the whole host of NYC punk and new wave bands whose classic debuts appeared on major labels in 1977 and 1978 – most were playing together for several years prior. Lengthy gestation periods are now the exception, but Yuppies makes a case for them. It illustrates the vitality that years of chiseling and refinement instills in a young rock band.

Yuppies’ tracks flow seamlessly into one another. It’s a clue that they were honed live, or in rigorous rehearsal sessions that bled songs together with segues to counter the tedium of practice. There are chops learned in a bedroom through ascetic commitment to an instrument, and there are chops hardened through constant gigging and loud rehearsals. Yuppies brings the latter to mind. The drummer plays for precision, sure, but he’s also berating the kit like he just wants to be heard over guitar cabs in a basement without any pro live sound amenities. “What’s That?” and “Easy Nights” are album highlights, but part of their charm is the former’s towering outro crashing into the latter’s punchy intro. The bridge makes the grass greener on both sides.

With the ceaseless sequencing of songs, Yuppies forces listeners to reckon with the album as a whole. There’s a thematic arc that loosely details some manic Midwest sojourn by automobile. The eerie and utterly taut opener “Across the Prairies” paints the dreary landscape as a terrifying void, “A Ride” seeks “destinations where needs are met,” and “What’s That?” deals a sneering mantra of indulgence: “Produce! Consume! Waste! Renew! Adapt!” This opening trio veers from tense restraint to chaos and even flirts with a memorable hook. Though Yuppies’ hooks are always lacerated with some abrupt rhythmic punctuation of impassioned scream to keep listener’s attention – or deter the players’ boredom.

Lengthy collaborative partnerships yield more interesting songs. Eventually, there are enough flourishes and designated sections for improvisation added to deter rote redundancy that a song hardly resembles its inception. It becomes the initial sketch’s more gangly offspring – the ironic jam outro or faux free jazz build ups used as rehearsal amusements become permanent additions. “A Ride” sounds like that – the noodling beginning with its spoken invitation (“Grab your things / Collect your thoughts / We’re going for a ride / Alright, alright / WOOOOAAAAAHH”) give way to an off-kilter groove. Emphatic riffing invites some horn squeals and the track descends into a hobbling, ragged version of its former self. It’s shambling and furious, sounding like Yuppies melted down for fun enough times at that moment that they cemented it as a part. It’s hard to imagine Yuppies deciding, “Yeah, this is where the song collapses for 55 seconds.” Shit happened, they kept it and Yuppies is better for it.

“Worms” is a repetitive dirge with gnarled vocals and woozy guitars. The singer explains that he’s a worm wriggling into a brain and controlling people towards devious ends. He’s relishing the cruel coercion. His audible lust for power is unnerving. By contrast, “I Don’t Know” examines the staggering hugeness of the world and laments the inconsequentiality of a miniscule person in it. It’s not an original revelation for a songwriter, but it’s a surreal examination of the sentiment that quickly finds us swallowing anchors in a bathtub. The simile, “Time ripples on like water we try and stay afloat” pivots the song into poetic absurdity. It’s a water world and everyone must build boats. He stutters out, “I’d rather be a raft made of driftwood then a yacht made of sand and pixelated ideas.”

The Dull Tools connection will certainly invite some Parquet Courts comparisons, which are especially warranted when Yuppies play straight-ahead and snarl, but it’s not a very telling comparison. Sure, Andrew Savage butts into the press release, but he’s wise to take the moment and name-drop “loner-poet” Burroughs. Whether or not that comparison (or the Miller one) holds up under scrutiny, they’re in a lineage of artists that at once sputters bile on American convention and depends on it to create enduring work. Miller’s car – crucial to Air Conditioned Nightmare – probably looked a lot like the one on Yuppies’ album cover.