Alain Badiou on the undecided 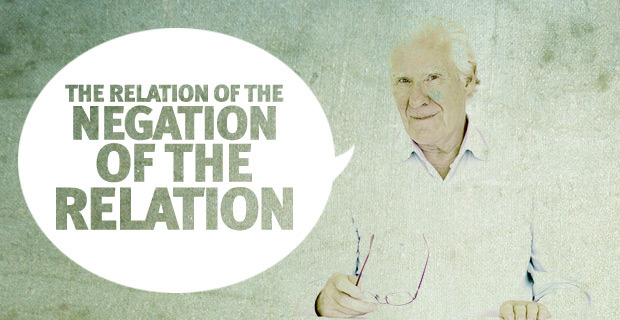 As is common with philosophers in translation, Alain Badiou comes close to putting your mind through a meat grinder. Yet we read on relentlessly; we put our faith in Monsieur Badiou. Not just because he is the contemporary soul mate of our mentor Slavoj Zizek, nor because he wrote a book called The Communist Hypothesis, but because we can't deny in the bottoms of our bellies that the Badiou grinder makes our minds sumptuous.

One way into Badiou's central ideas is through what he calls a “philosophical situation”: a situation is philosophical when it presents clear choices, between which there is no common measure; he calls this relationship of negation “a relation without relation”.

As such, the main tasks of philosophy are to elucidate:

Badiou has an explanation for why philosophers have nothing interesting to say about electoral choices. Democratic alternation means that the majority and the opposition periodically trade places, substituting each other, which is only possible if they have a common measure. This means a parliamentary election is not a philosophical situation: “the decision is a decision between nuances.”

But here is the real kicker!

So what does it matter if parliamentary elections is not a true philosophical situation?

“Elections are generally decided by the small group of the hesitant, those who do not posses a stable, pre-formed opinion. People who have a genuine commitment constitute fixed blocks; then there is a small group of people in what is called the centre, who sometimes go one way, sometimes the other. And you can see why a decision taken by people whose principal characteristic is hesitation is a very particular decision; it is not a decision taken by decisive people; it is a decision of the undecided, or of those who have not decided and who will then decide for reasons of opportunity, or last-minute reasons. So the function of choice in its true breadth is absent. There is proximity, rather than distance. The election does not create a gap, it is the rule, it creates the realization of the rule.”

The complete lecture from which these points were taken is available in Badiou & Zizek: Philosophy in the Present, published by Polity Books. In it Badiou also discusses an example of what is a philosophical situation within American politics: the war against Iraq.