CMJ Saturday: A day in the life (abridged) 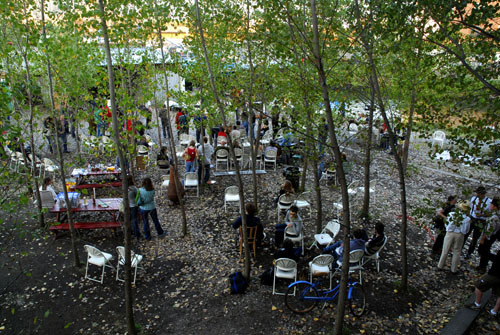 I wasn't really intending to shoot yet another Old Time Relijun show (my third in two days), however much I might enjoy their current limber jazz-garage incarnation, but then, biking into the city to hit some of the attractions of CMJ's final day, there they were. Not only were Arrington de Dionyso and co playing in my neighborhood, but they were playing in the weird, tree-infested expanse of the Yard, right between a set of honest-to-whatever-gods circular ruins (old silo foundations) and the mysterious, murky-slick surface of the Gowanus canal. Really, what could be a better context?

Let's count the ways the Saturday Islands show was indisputably better than the Friday example:
1. Outdoors! Who doesn't love the outdoors? We all love the outdoors.
2. Not in the R-Bar. Not cramped in any way. As opposed to Friday's venue, crammed fuller than a rush-hour 4-train, the park by the Williamsburg Bridge hosting Saturday's gig, (complete with statue of George Washington and ice cream truck), had plenty of space to spread out and still hear, and usually see, just fine.
3. Not in the R-Bar. Seriously, why was the Brooklyn Vegan party there in the first place? Expensive drinks, stripper poles, and, under usual circumstance, terrible weekend crowds and bad music.

4. MCs. Subtitle a definite highlight when he hopped on stage during “Where There's a Will (There's a Whalebone)” at R-bar, but this time, we got both Subtitle and another guy on the second verse, a bearded white dude roughly half Subtitle's height for maximum contrast.
5. Stage banter. Nick DiamondThorburn directly addressed the ice cream man (who actually turned on his pop-goes-the-awful music box noise at one point during the set), claimed to have a message from the statue at his back, and discussed the giant billboard for “Crossword – the new game show from the creator of Wheel of Fortune”, which no one in the audience admitted to having watched. And then talked to the ice cream man again.

I got tipped off to the Capstan Shafts by a friend who somehow managed to catch the first ever live performance of the band's eight year, 17 album give-or-take career, with Johanna Kunin at a secluded church in Vermont several weeks ago. After hearing about these finely-crafted lo-fi rock songs in the vein of old Guided By Voices, I made a point to be at their CMJ appearance. Sadly though, whereas the Capstan Shafts is usually entirely the product of Dean Wells, who writes and records all the songs, here he'd somehow lost his guitar on the way into the city and was playing with a guitarist, bassist, and drummer. The fact that he was singing some very well-honed pop songs was able reach even my unfamiliar ears, but unfortunately, his talent seemed diluted by the perfunctory backing band.

So let's just get this out of the way: of course they sounded great. The songs are good and they sounded good here, waves of heavy beauty rolling over our heads for an hour. But come on Justin Broadrick, can't you at least try to put on a live performance? Okay, so you didn't actually do any of shoegaze's eponymous foot-staring, instead moving around the stage and lashing at your guitar, and I know the backing tapes are needed to fill out your exquisitely arranged compositions, but the songs sounded exactly like their recorded counterparts, with no real room for variation or experimentation. You still sounded great, but I'd give a little of that up for some surprises.

The night was looking like something of a bust. Local-rock-kids-made-good Matt & Kim managed to sell out Music Hall of Williamsburg for their last show before hibernating for the winter to write and record some new songs, which is great, unless you're us, stuck standing out on the curb. After drowning our sorrows in glorious 32-ounce Styrofoam cups of beer at Rosemary's Greenpoint Tavern, we headed out to Bushwick for the night's Vice party… which had just been busted and shut down, about seven police cruisers milling about the street out front. Back in Williamsburg we find ourselves outside the Spin/Musebox party at Galapagos, one of the few things still going. It's RSVP only, but we make effective use of the look-like-you-know-what-you're-doing-and-stroll-right-in approach. No idea who's playing but then…

The band kicks into “Young Folks”. And it's not a cover. Yes, headliners of the party are Peter and Bjorn, sans John, but holy shit, we didn't even know they were in the country. We're not sure if that was actually Victoria Bergsman singing with them, but for added weirdness Lex hip-hop producer Boom Bip is there… on bongos. After the set, Peter tells us that though they won't be playing any more shows together in New York, they'll be here until November and that he'll have a couple solo performances at Joe's Pub. Thanks, guys, for closing out CMJ in style that not even Vice could manage.